Down to 6 men but Galatasaray end Fener’s streak 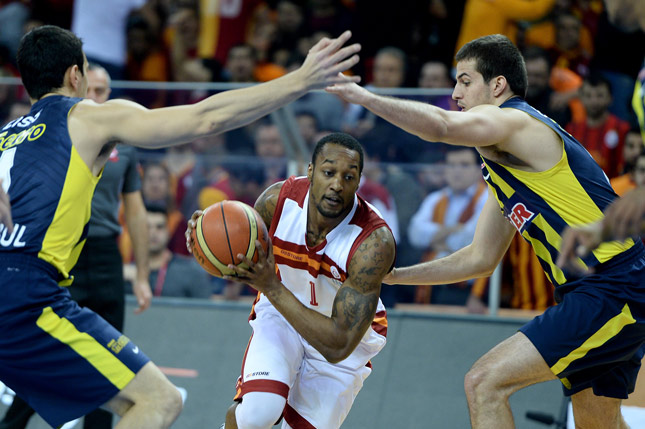 by Daily Sabah Mar 11, 2015 12:00 am
Despite having just six available players, Galatasaray Liv Hospital defeated their archrivals and league leaders Fenerbahçe Ülker 92-88 thanks to Zoran Ercek and Sinan Öztürk's magnificient performance at the Abdi İpekçi Sport Arena on Monday.

Although Galatasaray took to the court with just six players, due to injuries and financial problems, they managed to inflict league leaders Fenerbahçe Ülker's fifth defeat of the season. At the same time, it also ended Fenerbahçe Ülker's six-game winning streak. The hosts took control in the opening minutes and were ahead going into the half, 41-39, with the game balancing on a knife edge. Galatasaray extended their lead to five points in the third quarter before holding off Fenerbahce Ülker, who won the fourth quarter 25-24, to secure a valuable and morale-boosting win. Galatasaray were given something of a helping hand from the visitors who were perpetually in foul trouble, giving them the chance to make 18-of-22 free throws (81.8 percent) during the game. The 26 personal fouls committed by Fenerbahçe Ülker helped their opponents get some easy free throw opportunities. Serbian Zoran Erceg stepped up when his team needed him most and put up the impressive statline of 26 points and five rebounds for Galatasaray while Turkish international Sinan Guler contributed with 25 points for the winners. American guard Andrew Goudelock answered with 19 points and four assists and Serbian Nemanja Bjelica added 14 points and five assists in the effort for Fenerbahçe Ülker. Five Fenerbahce Ülker players scored in double figures. Fenerbahçe Ülker's coach tried various player combinations and subbed in a total of 11 players in the game, all to no avail. Galatasaray moved up to fifth place, which they share with Banvit BK. Defending champions Fenerbahce Ülker still retain top position with five games lost so far. They were joined in the leadership position by Anadolu Efes, who have the same record. Fenerbahçe Ülker will play against Istanbul BSB in the next round trying to make it back to the top of the standings on their own. Fener won't be the only team locked in an Istanbul derby as Galatasaray will try to continue the momentum from their recent victory when they play seventh-ranked Beşiktaş in Istanbul.