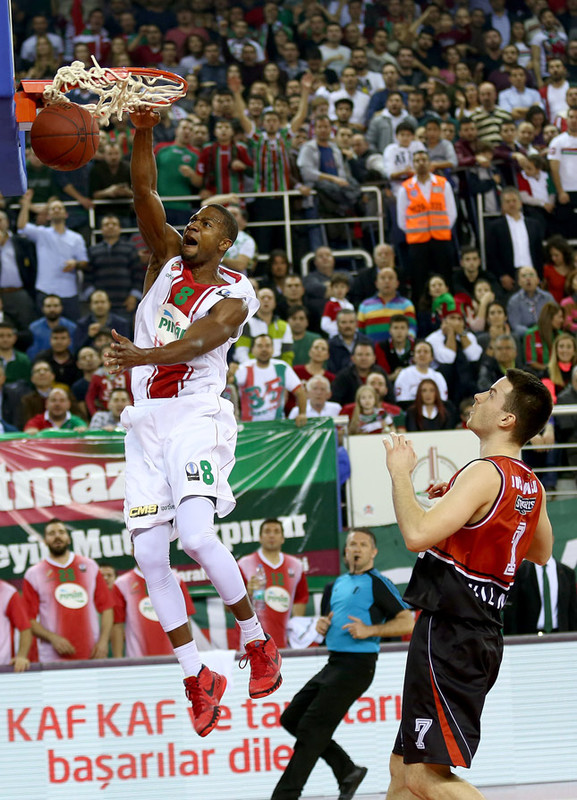 While Pınar Karşıyaka advanced to the Eurocup Quarterfinals for the first time in club history by downing Lietuvos Rytas 97-81, the team’s fans achieved the loudest crowd roar at an indoor sports event

Turkish basketball fans not only were delighted by Pınar Karşıyaka's advancement to the Eurocup Quarterfinals, but also celebrated by creating the loudest cheering in terms of decibels (dBA). The loudest crowd roar at an indoor sporting event was 126 dBA achieved by fans at a Sacramento Kings game against the Detroit Pistons at Sleep Train Arena, Sacramento, California, on Nov. 15, 2013, according to the Guinness World Records Book. The crowd at the Sleep Train Arena surpassed the previous record of 106.6 dBA during a timeout in the first quarter with a measurement of 119.7 dBA, and an attempt at halftime of 122.6 before a final attempt during a fourth quarter timeout.

However, Pınar Karşıyaka fans surpassed the record of Sacramento Kings' fans, although it is not yet registered officially. Pınar fans who filled the Karşıyaka Arena Sport Facility to capacity surpassed the previous record of 106.6 dBA, rising it to 126.5 dBA.

Pınar Karşıyaka advanced to the Eurocup Quarterfinals for the first time in club history by downing Lietuvos Rytas 97-81 at home on Wednesday.

The series was tied after Game 1, turning the showdown into a make-or-break battle in which Karşıyaka prevailed. Jon Diebler led the winners with 26 points. Bobby Dixon added 14, D.J. Strawberry had 13, 5 assists and 5 steals while Erkan Veyseloğlu had 10 points for Karşıyaka. Gediminas Orelik led Rytas with 22 points. Martynas Gecevicius added 17 while Zygimantas Janavicius had 11 for the guests.

A 9-0 run that Kenny Gabriel capped with a three-pointer gave Karşıyaka an 18-11 lead. Karşıyaka boosted its margin to 38-24 midway through the second quarter and found a go-to guy in Diebler, who had 15 points in four minutes to give the hosts a 53-34 lead at halftime. Nothing changed after the break as Karşıyaka boosted its margin to 65-42 and then again to 89-64 early in the fourth quarter, enough to seal the outcome and make it to the next round.

Dixon got Karşıyaka going with a three-pointer, Janavicius made free throws and a triple by Orelik gave Rytas its first lead, 3-5. Barış Hersek followed a layup with a fast break slam but a three-point play by Orelik restored a slight Rytas edge. Hersek dunked again, Janavicius struck from downtown but 6 unanswered points including 2 dunks by Strawberry ignited the crowd. Gabriel capped a 9-0 run with a three-pointer, as free throws by Adas Juskevicius kept Rytas within five. Veyseloğlu hit a six-meter jumper to fix the score at 20-13 after 10 minutes. Gecevicius hit a three-pointer early in the second quarter. Veyseloğlu answered from downtown, igniting a 7-0 run highlighted by Gabriel's dunk. Travis Leslie stepped up with a layup that Strawberry bettered with a triple. Orelik, Veyseloglu, Leslie and Hersek also hit shots from beyond the arc and another dunk by Strawberry made it a 14-point difference at 38-24. Diebler sank foul shots and soon added a jumper, a dunk and three bombs from downtown to break the series open at 53-34 at halftime.

Antanas Kavaliauskas dunked immediately after the break and a three-pointer by Gecevicius gave Rytas hope at 56-39. Diebler answered from downtown and a dunk by Strawberry made it a 22-point game at 61-39. Gecevicius hit from beyond the arc, Diebler made free throws and a layup by Juan Palacios made the guests call timeout with a score of 65-42. Mindaugas Lukauskis and Janavicius joined the three-point shootout but Cemal Nalga and Palacios kept the hosts way ahead at 71-50. Gecevicius hit another triple and Lukauskis added an acrobatic layup but Karşıyaka started to get to the foul line more often and a layup by Soner Şentürk gave the hosts a 78-57 edge. Another basket by Veyseloğlu made it 80-59 after 30 minutes. Rytas struggled to score early in the fourth quarter while a dunk by Gabriel and back-to-back triples by Dixon sealed the outcome, 89-64. Rytas kept trying in the final five minutes, but Karşıyaka had plenty of time to celebrate that their team will keep fighting for Eurocup glory.