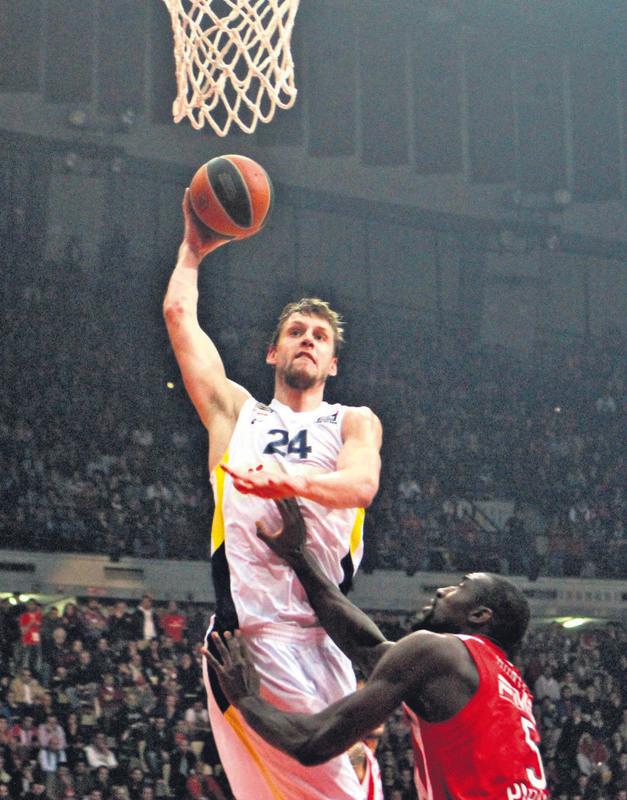 Fenerbahçe sent a strong message to the EuroLeague as they beat Group F leader Olympiacos 73-64. Yellow Canaries coach Obradovic admits his side is in a ‘trap' when they play at home

Fenerbahçe Coach Zeljko Obradovic admitted that his side prefers to play games away from home after his troops defeated Olympiacos last Friday in a crucial Top 16 clash in Greece.

Fenerbahçe sent a strong message to the EuroLeague on Friday as they beat Group F leader Olympiacos 73-64. Group F now has a three-way leadership with CSKA Moscow leading the way on point differential after they beat Anadolu Efes on Friday with Fenerbahçe and Olympiacos making up the other top three slots. All three are level on eight wins and two losses with four more games left to go in the EuroLeague. The win on Friday gives Fenerbahçe the all-important tiebreaker should Olympiacos and Fener finish the Top 16 with the same number of wins.

For Fenerbahçe the winning continues. The Istanbul side has won seven games straight in the EuroLeague while they extended their away winning streak to nine, having last lost away from home back on Oct. 30, 2014.

As usual, former Los Angeles Lakers guard Andrew Goudelock was the catalyst for the win, scoring 24 points while hitting a sensational six out of seven 3-pointers. His acrobatics at the end of the game to grab a rebound and lay the ball back up also helped seal the win for Fenerbahçe. Nemanja Bjelica also had 16 points and nine rebounds for the Yellow Canaries.

After the game, Obradovic praised his team's pressure on the ball and told them that the real work is yet to be done, before admitting that his side is more comfortable away from the Ülker Arena.

"We expected to have a very tough and difficult game here," said the Serb. "Up to now Olympiacos has the best defense in the Euroleague and it's all about the pressure on the ball. Tonight we played a very good defense, moved the ball well in offense, grabbed offensive boards and didn't allow them to play their transition game. I am very proud of my players because they played an excellent game. There are four more games to play and nothing is decided yet. We are a team that plays much better on the road than at home. I see the home games as a trap. The most important thing is to make the quarterfinals and then try to win three games and advance to the Final Four. This is exactly what I said to my players in practice, in order to make them more relaxed and finally it worked out."

Nikos Zisis, who played 19 minutes in the win, said it was important for the team to bounce back after their disappointing domestic league defeat to the shorthanded Galatasaray. Fener certainly appeared to feel no ill effects after the defeat, leading for the entire game, but falling behind at the end of each quarter.

"It is a very important win in a difficult game, which we managed very well," Zisos said. "We were preparing especially for this game and it cost us the loss to Galatasaray in the Turkish League. Tonight we played great defense on Vassals Spanoulis and we had balance at both ends of the court. It is a big win, but nothing is decided yet. Now we have to win the three games at home in order to give value to the road victories in Moscow and Piraeus. There is a mysterious gap in our performance between home and road games. When we play at home we are affected by the enthusiasm, but outside we keep our concentration and remain dedicated to the coach's plan."

Elsewhere, CSKA Moscow became the first team in Group F to be guaranteed a playoff spot after they defeated Anadolu Efes 88-83 in Russia. After a good start to the Top 16, Efes are now 4-6 looking at the very real possibility that they could miss out on a playoff place that seemed all but assured earlier in the tournament.

Despite taking an early lead, Efes fell behind and never recover against the Russians, who showed once again their ability to execute in tight, difficult games.
Last Update: Mar 15, 2015 10:13 pm
RELATED TOPICS