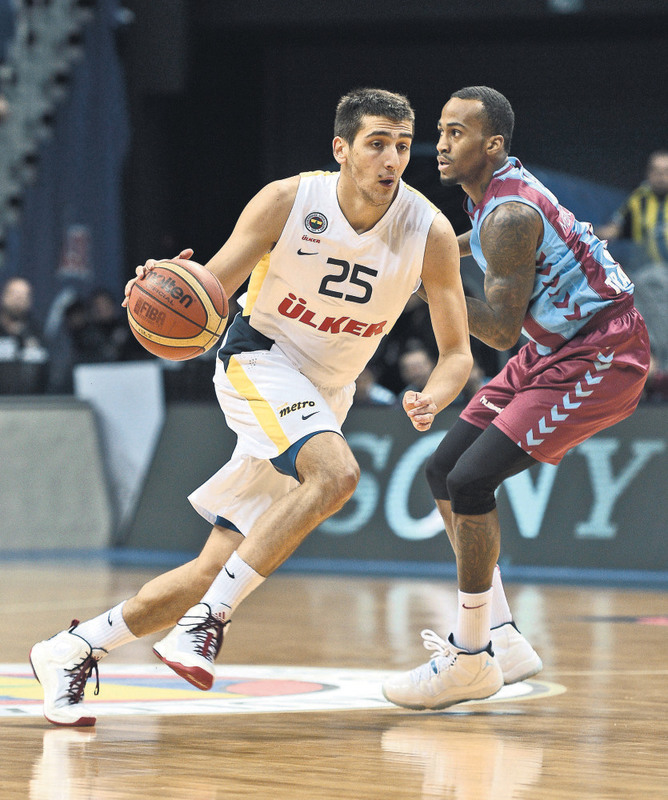 Despite their deadly form away from home, Fenerbahçe youngster Kenan Sipahi thinks his side should set their sights on home advantage for the next round

Fenerbahçe youngster Kenan Sipahi says his team's priority is now gaining the home court advantage in the next round of the EuroLeague despite Fener's unstoppable nine-game away winning streak.

The Istanbul side have been on a tear of late, winning their last eight EuroLeague games propelling them to the top of a tough Group F, ahead of Olympiacos and CSKA Moscow. With a place in the next round already assured, Fenerbahçe now have to create a new goal before the knockout stage begins.

Sipahi, who led Turkey to the 2013 U18 European Championship while becoming tournament MVP, has been watching most of Fenerbahçe's great run from the sidelines after collecting an injury a few weeks ago, but the youngster thinks that a home court advantage is the goal for Fener, despite being better away from home than at home at the moment.

"We already qualified to the playoffs and are going for the home court advantage," Sipahi told the EuroLeague website. "That's the next goal for us - we have some of the best fans in Europe, if not the best, so it is very important to get the home court advantage. We want to finish our job in the Top 16 and try to be first if possible.

Sipahi, one of Turkey's best prospects since his breakthrough as a 15-year-old with Tofas Bursa, admits that he has no idea why the club have been so deadly away from home and why it took so long for their home fans to catch up, even admitting that he has spoken to teammates about the phenomena.

"Our last EuroLeague road loss came in October; I think it was against Panathinaikos in Athens. I don't really know what is making us play so well on the road," said the youngster. "We talk to each other a lot, and I have been discussing it with Nikos Zisis lately. Maybe we have more pressure at home, but I don't really think it is that because our fans give us great help. We are doing a great job in our road games, playing more like a team, supporting each other now. Maybe we know you need to focus and hustle more to win on the road, especially against teams like CSKA and Olympiacos. We need to support each other and talk more on the court. We are doing that very well on the road, but we have also started to play well at home."

It must not be forgotten that Fener's home form has very much caught up with their away form. After two losses to Olympiacos and CSKA Moscow at home in the first and third weeks of the Top 16, Fenerbahçe have not lost at home, winning their last three home games - the club played at home on Thursday night against Unicaja Malaga in a game after the time of print.

Sipahi credits summer signing Nemanja Bjelica as a big part of the Yellow Canaries' resurgence, calling him the best power forward in Europe.

"A lot of players on our team are doing a great job, but Nemanja Bjelica has been outstanding lately," Sipahi said. "He is playing really well, everyone can see that. He is very cool and calm, in a way that what he does even looks easy - but it isn't! It is also very easy to play with him, especially on offense. When you are under pressure, you give him the ball and he is like a 2.09-meter point guard."

Sipahi added: "He has great ballhandling and helps the team in many aspects of the game. This is becoming more and more important in European basketball, becoming good not just at one thing, but at many - defense, rebounds, 3-point shooting, penetration - and Nemanja does it all. Everyone following Fenerbahçe can see that he has improved a lot this season. He is looking more confident, and right now he is the best power forward in Europe. Like I said, he can do everything on the court. He is helping in everything we need in every game. He is a very important player for us."

For fans of Sipahi, the youngster returned to training this week and after performing sessions by himself, he is now back training with the full squad.

Turkey's Banvit Bandırma and Russia's Khimki Moscow Region have been paired up in the Eurocup semi-finals, after the latter eliminated Valencia Basket 76-61 in the Eurocup on Wednesday. Khimki won its 18th straight home game and advanced to the Eurocup semi-finals for the third time in the club's history, after winning the first round 76-75 in an away game on March 17. Banvit Bandırma defeated Paris Levallois 75-71 in a home game in the quarter-finals Tuesday, earning the first semi-final ticket in the Eurocup, which is also a first in the club's history. Paris Levallois won the first game of the two-game series 67-65 in France last week. Eurocup, also known as the ULEB Eurocup, is the second-tier basketball league in Europe, one level below the Euroleague.
Last Update: Mar 27, 2015 1:39 am
RELATED TOPICS