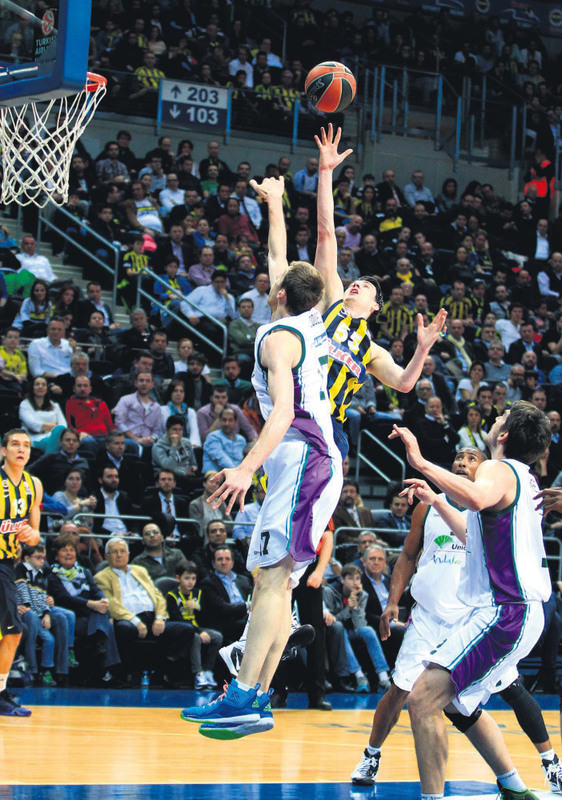 An eighth straight win in the Top 16 sees Fenerbahçe become one of the most feared teams in Europe, while Anadolu Efes still have work to do

Fenerbahçe coach Zeljko Obradovic has urged his players to maintain their form after they collected their eighth straight win in the Top 16, beating Unicaja Malaga 78-63 on Thursday.

Leading Group F with a 10-2 record, Fenerbahçe are arguably the form team in Europe at the moment with two games left of the Top 16, and teams around the competition will be looking at Fener as potential contenders after another convincing win. Despite a slow start, which Obradovic described as "bad," Fenerbahçe recovered from a first quarter deficit to take a 39-33 lead into half time after Bogdan Bogdanovic's half-court heave.

Fenerbahçe tore apart Malaga, who are now out of the competition with a 2-10 record, in the third period before coasting in for the win. After eight straight wins, not even the difficult-to-please Obradovic could find much fault with his side, aside from the first quarter and the injury to Ricky Hickman.

"Before the game, I told my players that we have to play every game with the same intensity and seriousness until the Top 16 is over," Obradovic said. "Despite having lost their chance for the next stage, Unicaja Malaga fought really well. We were bad in the starting five minutes. But we started to change our mood in the game in the second quarter. Then my players did a great job in the third period. There were many things that I liked tonight. My players ran back really well and defended after missing shots. I want to congratulate my players and the fans. The only bad thing on the court was the injury of Ricky Hickman. We will have clear information about his injury tomorrow. We are hoping to have good news, but it seems like it's a serious injury."

Andrew Goudelock was once again a star for the hosts, scoring 22 points while hitting four of his seven 3-point attempts. Nemanja Bjelica, who arguably had the game's best play with an emphatic chase down block after a turnover, had 15 points in another dominant display.

Although Fenerbahçe got just one field goal out of high-flying wing Jan Vesely the Czech star was not concerned about his own numbers, praising the teamwork of his teammates.

"We are playing better day by day," Vesely said. "Tonight was a good example of the team's chemistry. We share everything on the court. Everybody is involved in the game in all aspects - rebounds, assists. I'm happy to be a part of this great team. We hope to keep on winning until the end of the season, and hope to have good news from Ricky Hickman."

Elsewhere, Anadolu Efes left themselves needing two wins from their final two games as they went down 86-75 to Olympiacos in Greece.

Coach Dusan Ivkovic praised his side's performance, but admitted that Olympiacos were just too good for his side in the final quarter. Ivkovic was also given a hearty ovation on his return to the club with whom he won two EuroLeague titles with in spells at the team.

"Congratulations to Olympiacos because they played a very good game and deserved to win," the Serb said. "We tried to play our basketball and did it, but only for 30 minutes. Then, in the last quarter, Olympiacos outscored us, hit six out of eight 3-pointers and destroyed our defense. We didn't have the right reaction, and now we have to find ourselves and try to win the last two games. I want to thank Olympiacos for the award ceremony, the warm reception and the big moment I experienced once again here. I wish them all the best."

Anadolu Efes are now left fighting for their lives with two games left. Although they remain in qualifying position, they have Laboral Kutxa Vitoria breathing down their necks - as both teams have a 5-7 record. Two wins from their next two games, against EA7 Emporio Armani Milan and cross-town rivals Fenerbahçe, will secure a place in the knockout phase.
Last Update: Mar 28, 2015 2:15 am
RELATED TOPICS