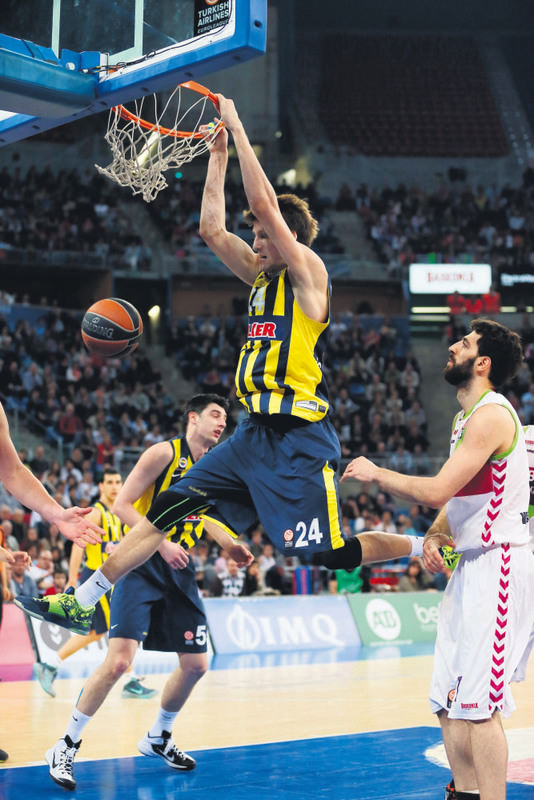 Fenerbahçe Ülker went down by 15 points to Laboral Kutxa Vitoria, ending their winning streak and putting Anadolu Efes in a tight spot

Fenerbahçe's nine-game winning streak came to an end on Thursday night as they went down by a surprising 15-point margin to Spanish side Laboral Kutxa Vitoria.

The defeat means little to Fenerbahçe in terms of positioning for the next round - a win next week will guarantee the top spot in Group F - and is really only significant in terms of their personal pride, but the result does have repercussions for their cross-city rivals Anadolu Efes. Had Fener come out on top, Efes would have only needed a win last night to secure a spot in the next round. As it is, Efes - who played last night after the time of print - need to win against Fenerbahçe next week in the final round of the top 16 to qualify through to the knockout stages.

On Thursday night, an early 10-0 run for the hosts gave them a commanding lead they would ride all the way to victory. Fabien Causeur, who finished with 15 points, hit two back-to-back 3-pointers to spark the 10-0 run that turned a 9-10 deficit into a 19-10 lead. The first quarter ended 21-14.

Fernando San Emeterio would help inspire Laboral further in the second quarter, building on their early lead. When the Spaniard hit a ridiculous off-balance 3-pointer and a free throw, the hosts boasted a 17-point lead at 37-20. Fener would only limit the deficit to 13 by the end of the half.

A good side like Fenerbahçe was always going to have their moment and the Istanbul side made their run in the third quarter with Andrew Goudelock scoring a pair of baskets to make the score 42-37, with Fener hot on Laboral's tail.

Laboral, however, were up to the task, and responded with a 12-0 run that all but crushed the tie.

Fenerbahçe coach Zeljko Obradovic admitted after the game that the hosts had been simply too good for his side. The Serb put the result down to the hosts' ability to generate turnovers and turn them into easy points.

"First of all, I want to congratulate Laboral Kutxa for this win," said the Serb. "They played a good and complete game, from the beginning to the end. They played with a great pace and good defense that allowed them to score a lot of fast-break points, and that's where we lost the game tonight. We turned the ball over 10 times in the first half, and had 16 in the end. This is a game where you can lose balls, but the way we did it tonight is something difficult to understand. Every time we lost the ball, they scored in transition with ease."

Obradovic said after the game that despite his side's nine-game winning streak in the EuroLeague, they had done nothing yet and need to pick up the pace in the future.

"Let's see what happens in the last week because we still have chances to lead the group," Obradovic stressed. "We started preparing for this game on Monday, and I said to my players that what we did so far was useless, that we needed our best to win tonight - and it proved right. We must change some things; we played without energy, slow on offense, without giving help on defense. If my important players play like this in the following games, we will have a tough time."

Elsewhere, Galatasaray lost 81-72 to reigning EuroLeague champions Maccabi Tel Aviv. The Istanbul side had a strong first half, going into the half just a point behind the champs. In the second half, however, the Israelis made their presence felt, eventually pulling away for the win. Gala coach Ergin Ataman credited his side for coming back from, what he called, a slow start to challenge in the first half. "We started the game really poorly," Ataman said. "Even though we stopped Sofo[klis Schortsanitis] almost completely, [Brian] Randle had his own private dunk contest, and that was the worst thing that could have happened to us. Then we crowded the paint, we stopped Maccabi's running game and they shot in poor percentages. We played a long time with our young players, and I'm glad they got significant minutes and gained experience, but it's hard to win here without a full roster. The Turkish League is more important to us right now, and when I said before the game that we could not win, I was right."
Last Update: Apr 04, 2015 1:51 am
RELATED TOPICS