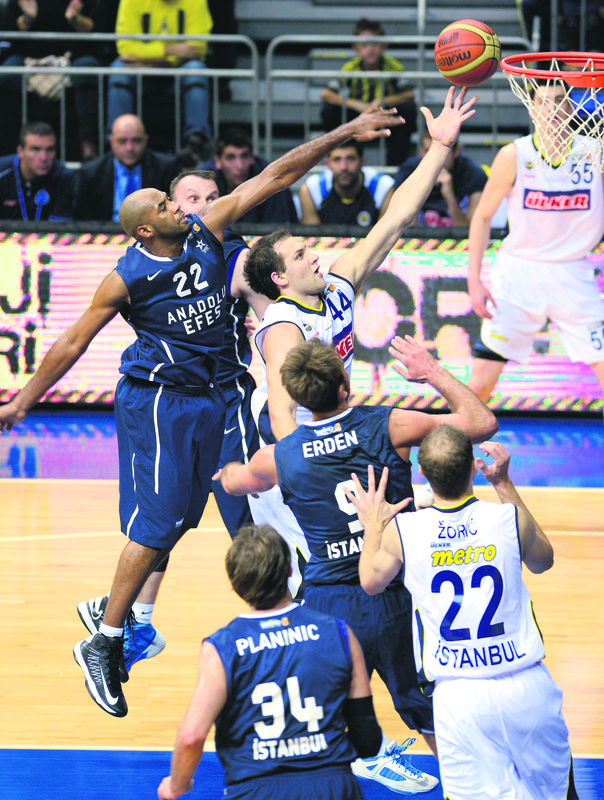 Anadolu Efes look ahead to the biggest challenge of the season so far, today in the Game of the Week against cross-town rival Fenerbahçe Ülker on the latter's Asian side of Istanbul, where a victory would assure Efes a playoff spot

Anadolu Efes Coach Dusan Ivkovic has told his players they need to concentrate for the full 40 minutes if they are to overcome Fenerbahçe tonight and advance to the knockout stages of the EuroLeague.Despite a good start and an impressive squad, Efes have left it until late to gain a place in the quarter-finals for the second time in three years. Standing in their way is not just a cross-town rival in Fenerbahçe but the EuroLeague's form team. Before last week's loss to Laboral Kutxa Vitoria, Fenerbahçe had won nine straight games in the EuroLeague to put themselves in pole position in the grueling Group F.

Fenerbahçe are not without motivation in the game, a win for them and a defeat for CSKA Moscow will book them the top seed going into the knockout phase. But all eyes will be on Efes as they try to stamp their mark on a tournament they are capable of competing for.

Ivkovic knows his side are up against one of Europe's finest away from home and will need every ounce from his players to get the valuable win.

"We have one important game, which will be the last game of the Top 16," said the Serb. "We absolutely must be focused on the game parameters like concentration, control of the game and good communication both offensively and defensively. Fenerbahçe had some big games in the second leg of Top 16 like Olympiacos and CSKA Moscow. We will need extra attention for 40 minutes and we want to win this game to qualify for the playoffs."

Although they will not want to think about it, Efes can still qualify should they lose to Fenerbahçe. They are currently tied with Laboral Kutxa Vitoria in the all-important fourth spot in Group F and hold the tiebreaker over the Spaniards. A defeat for the Spaniards against compatriots Unicaja Malaga would guarantee Efes a spot in the next round.

Efes's young star Furkan Korkmaz is not taking any heart from Fenerbahçe's surprisingly heavy loss last week and expects a difficult game regardless of whether the home side play a weakened team - which may include exciting youngster Doğuş Balbay.

"Fenerbahçe is recently in good shape," Korkmaz said. "They have dangerous weapons, and they play both sides of the game very well. This season, we have met three times so far and won two of them. But this fourth game will be much more important for us because if we win, we will step into the playoffs. So, we are aware of the importance of this game. We must be very well-prepared. We absolutely want to win this game, and we will go to the arena with only one aim: Winning."
Last Update: Apr 08, 2015 10:17 pm
RELATED TOPICS