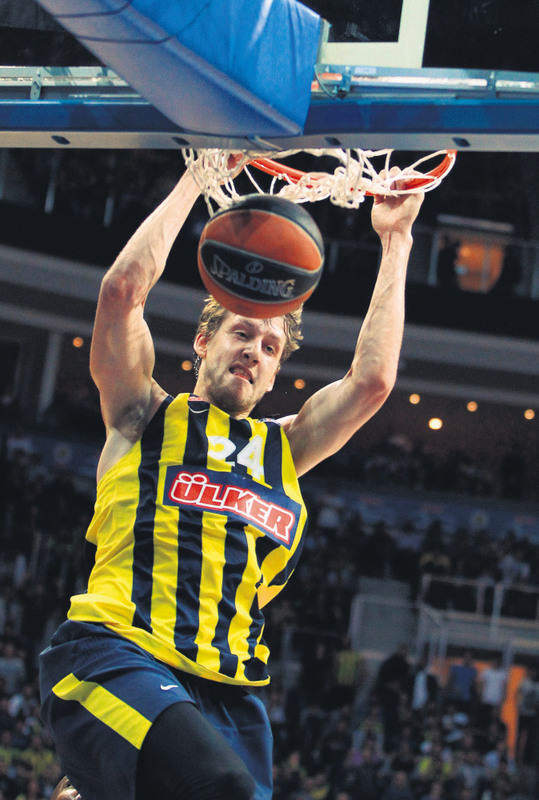 Grabbing their first ever playoff win in club history, Fenerbahçe got off to a winning start in their quarter-final best-of-five series with Maccabi Tel Aviv

The win is Fenerbahçe's first ever in the EuroLeague playoffs, marking a historic night that saw a comeback worthy of a team that have been one of Europe's most impressive so far this season.

Between the third and the fourth quarters, Fenerbahçe sparked a 20-point swing. After Alex Tyus put Maccabi up 46-56 with four minutes to go in the third quarter, Luka Zoric replied with six straight points to trigger an 11-0 run. Andrew Goudelock would give Fenerbahçe its first lead at 59-58 late in the quarter.

In the final minutes of the game, Vesely stepped up with eight points in the final four minutes with his trademark highlight-reel dunks and put-backs.

The win showed exactly why Coach Zeljko Obradovic had warned his players before the game about the difficulty of the playoffs. "The game developed the way I expected. It was a tough game," said Obradovic, a six-time winner of the EuroLeague. "Jeremy Pargo played like a leader [for Maccabi] and he was a big problem for us. We played much better in the second half. We had more patience on offense. I'm happy that we won, but it's only 1-0 and we must be very focused in the second game because Maccabi played excellent. I want to thank our fans who gave us a lot of energy, and I hope they will do that again on Thursday. "

Vesely was the man taking the plaudits with his team-high 23 points, two less than Pargo managed for Maccabi. The Czech star thanked his teammates for setting him, allowing him to go 11-for-14 from the field.

"It was a tough game in the playoffs," Vesely said. "No second is easy; you have to play hard every single second. We didn't do that in the beginning, but after that, we jumped on it and we got the game. I try to play hard every game and to play good defense. But today I was getting all the baskets from my teammates."

Maccabi coach Guy Goodes lambasted his team after the game for switching off three-quarters of the way through the game, claiming his players failed to step up at the right times.

"The game is 40 minutes, not 25," Goodes said. "In the critical moments, we fell apart. And that happened against their second unit with Zoric and Emir Preldzic who did some nice things. We committed a couple of critical turnovers and they took the lead after that. Fenerbahçe also used a short rotation. I put in Nate Linhart and MarQuez Haynes for a few minutes, but when Pargo and Yogev Ohayon are good, you don't need to pull them. There's no doubt that this is a long series, and we'll need to use everyone in the coming games."

Game 2 comes tonight for Fenerbahçe. Before the series, Obradovic spoke about the importance of winning the first two games, knowing that the Israeli team would have a tough task winning three of the next three games to advance. Fenerbahçe play again tonight at home before traveling to Tel Aviv for Game 3.
Last Update: Apr 15, 2015 10:47 pm
RELATED TOPICS