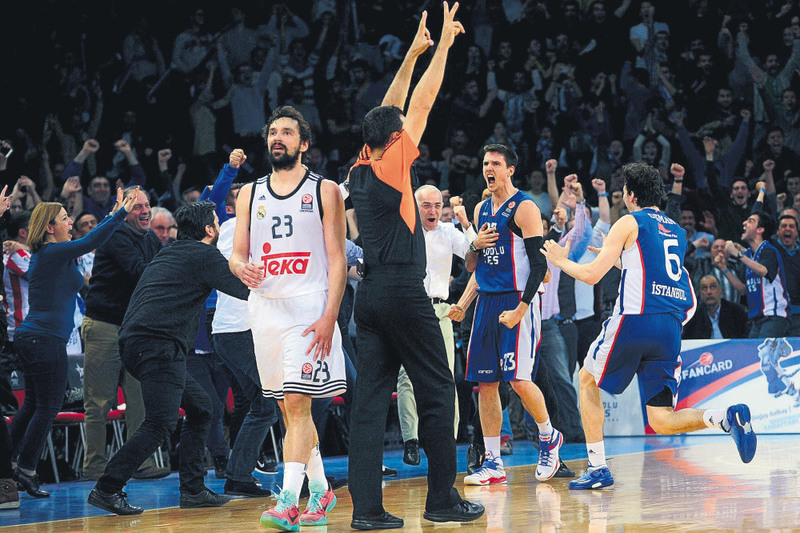 Efes pulled a game back in their thrilling quarter-final playoff with Real Madrid, with Janning hitting another buzzer-beater to make the series 2-1

Lightning struck twice for Anadolu Efes on Tuesday night with Matt Janning once again the buzzer-beating hero as Efes defeated Real Madrid to stay alive in the EuroLeague quarter-finals.

After knocking off Real Madrid with a tip-in on the buzzer back during the regular season, Janning repeated the trick with a last-second buzzer-beating 3-point shot to down Real Madrid 75-72 at the Abdi İpekçi Arena in Istanbul.

Efes are now 2-1 down in the best-of-five series with another game in Istanbul today and, if possible, a Game 5 in Madrid. The Istanbul side have been threatening to topple Real Madrid all series, having lost major leads in the two away legs. But on Tuesday they made no mistake as they beat Real in a jaw-dropping finale.

With seven seconds left on the clock, Jaycee Carroll looked to have sent the game to overtime when he nailed a 3-pointer from above the break to make the score 72-72. The inbounds pass made its way to Dontaye Draper via Cedi Osman who drove to the basket before picking out Janning near the left-hand corner. The American was wide open and sunk the 3-pointer to win the game, before being mobbed by his teammates and club officials. The shot capped a career performance for Janning, who had a career-high 21 points on five-of-seven shooting from behind the arc."It feels great. Obviously we're still alive," said Janning after the exhilarating game. "All we had to do was come here and win a game, and we did that. Now, we just got to focus on getting another one on Thursday. I think if we play like we did tonight, we can compete with them for two more games; so, that's what our goal is."

The hard work is still hard of them for Efes who can't afford to drop a single game if they want to get back to the Final Four for the first time in over 10 years.

In typical Efes fashion, they ran it close despite holding a commanding third-quarter lead. After a neck-and-neck start, Real Madrid were able to pull out to an early 19-11 lead with Gustavo Ayon pulling the strings for the Spaniards. Osman and Nenad Krstic were able to get key baskets before the end of the quarter to end the first period five points behind at 20-15. Krstic and Dario Saric made the big plays in the second quarter, with Saric sinking a 3-pointer that put them ahead half way through the period. A highlight-reel chase down block from Osman on Sergio Rodriguez got the crowd on its feet before Saric finished off the resulting fast break with an easy layup. The hosts went into the break 32-30 ahead, carrying the momentum.

In the third quarter, after a slow first half, Janning came alive, scoring 13 points in the period to put Efes well and truly in the driving seat, giving the hosts a 10-point cushion going into the final quarter at 56-46.

Reigning EuroLeague MVP Sergio Rodriguez led Madrid back with 8 straight points and Jaycee Carroll completed the comeback with a three to tie it at 72-72 with 7.5 seconds remaining before Janning had his moment of heroism.

Efes coach Dusan Ivkovic decided to thank "the gods" rather than Janning's smooth 3-point motion for the final play, but said that his team is maturing by the day.

"My team is growing up game by game," Ivkovic said. "On his three, we were supposed to make the foul, but Carroll scored. But the gods are looking down, and they know we are working well and great; and they helped us score the last three."
Last Update: Apr 22, 2015 11:47 pm
RELATED TOPICS