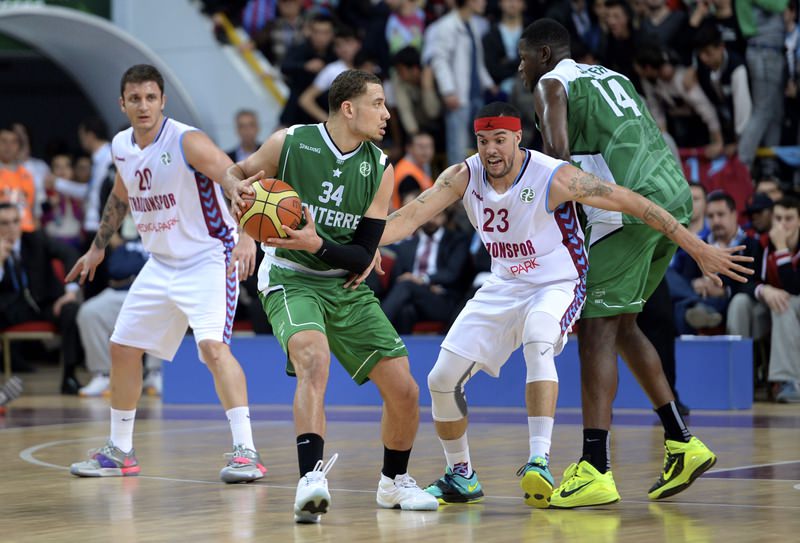 by Anadolu Agency Apr 26, 2015 12:00 am
The French team JSF Nanterre has won the FIBA Euro Challenge 2015 Championship after a buzzer-beating layup, giving them a 64-63 lead and the trophy.

Nanterre led the first quarter 19-17 and they were also up by nine points after the first half, 37-28.

In the third quarter, however, Trabzonspor fought themselves back in the game and cut Nanterre's lead to just six points at the end of the period, with a score of 47-53.

In the final quarter, Nanterre increased their lead to eight points, 57-49, but a 10-2 run by Trabzonspor equalized the score at 59 each with 2 minutes to go.

Nanterre were trailing 63-62 with 11 seconds left in the game, when Terrance Campbell missed a layup and Joseph Gomis kept the ball alive and passed to Campbell, who landed the last-second layup in the hoop to win the match and the tournament.

Trabzonspor, who participated in the tournament for the first time ever, had to settle for the silver medal after not being able to prevent the final basket by the French team.

Novica Velickovic had 13 points and 7 rebounds, and Dwight Hardy chipped in with 16 points and 6 assists for Trabzonspor, but those were not enough.

Jamal Schuler, Nanterre's shooting-guard who scored 10 points in the match, was selected as the Most Valuable Player of the tournament.
Last Update: Apr 27, 2015 11:04 am
RELATED TOPICS