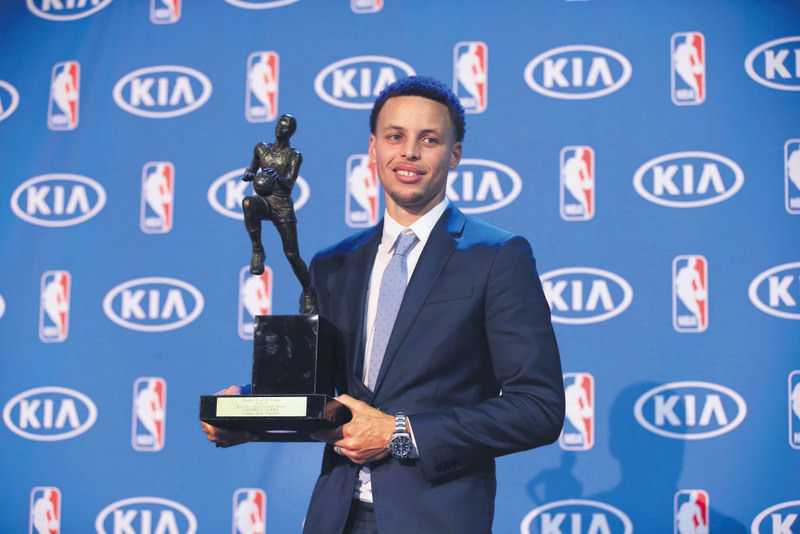 by Associated Press May 05, 2015 12:00 am
His voice cracked first. Then, his eyes got red. Finally, Stephen Curry cried. He had felt this way in the past when he barely received any university scholarship offers out of high school, when some questioned whether his game could translate to the NBA, when he sat in a doctor's office searching for answers on how to fix his troublesome right ankle. Curry could let it all out and laugh now. This was a time for celebration.

The Golden State Warriors point guard won the NBA's Most Valuable Player award Monday, the biggest moment yet of a young career already full of overcoming obstacles. Curry received the Maurice Podoloff Trophy in a packed hotel ballroom below Golden State's practice facility. He shook his head in disbelief as he was announced as the winner of the league's top individual honor.

"There were obviously good times and bad times. Times I wanted to shut it down. Times where you realize that all the hard work you put into it was worth it," Curry said. "It just made me realize how blessed and thankful I really am to be in this position."

Curry received 100 of 130 first-place votes for a total of 1,198 points from a panel of 129 writers and broadcasters, along with the fan vote on the NBA's website. Houston's James Harden had 25 first-place votes and 936 points. Cleveland's LeBron James, a four-time MVP, got five first-place votes and 552 points. Oklahoma City's Russell Westbrook (352 points) finished fourth and New Orleans Pelicans center Anthony Davis (203 points) was fifth. Across the country, James called Curry the "catalyst" for Golden State's rise from perennial loser to championship contender. Curry, now 27, was born in Akron but grew up in Charlotte, North Carolina, where he started in the shadows of his father. Despite his famous name, most major universities didn't offer Curry a scholarship because they thought he was too small. The 6-foot-3 (1.90-meter) Curry proved them all wrong, developing into a polished professional who can shoot, dribble and pass with the best of them.

Curry carried the top-seeded Warriors to a club-record 67 wins, surpassed his own NBA record for most 3-pointers in a season and added to his growing reputation as one of the most entertaining spectacles in sports. He's the team's first MVP since Wilt Chamberlain in 1960, when the Warriors played in Philadelphia. Curry signed a $44 million, four-year contract extension with the Warriors before the 2012-13 season. Back then, the deal looked like a major risk.
Last Update: May 05, 2015 8:52 pm
RELATED TOPICS