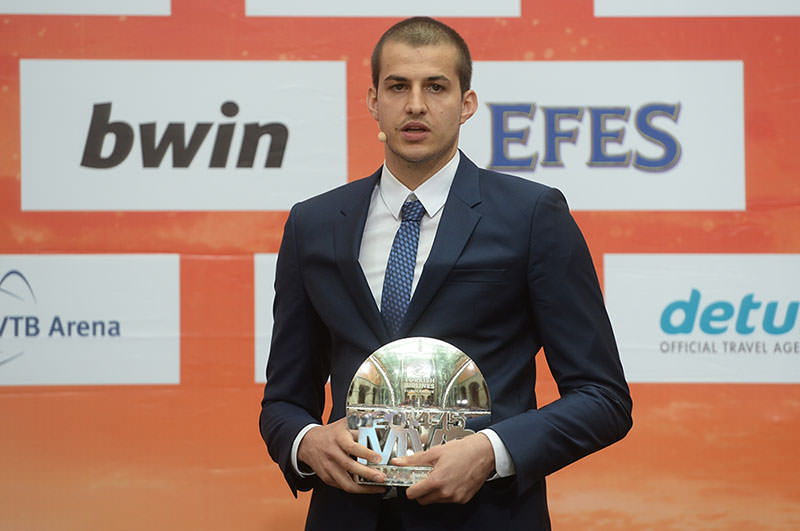 | AA Photo
by Daily Sabah May 14, 2015 12:00 am
The Serbian basketball player Nemanja Bjelica who plays for Fenerbahçe Ülker of the Turkish Basketball League, has been deemed as the "Most Valuable Player" of the 2014-15 season by the Euroleague. With this title, Bjelica also became the first ever Euroleague Basketball MVP playing for a Turkish club.

The versatile player reportedly received more votes –casted by journalists and fans– than any top player during the selection process.

The Euroleague Awards Ceremony took place in Madrid on Thursday, during which Bjelica was presented his trophy. 2014-15 was Bjelica's best season, having helped Fenerbahçe Ülker reach its first ever Final Four.

"I want to thank everybody who chose me for this and to my family for supporting me all these years," the 27 year old said after receiving the trophy. "This is a historic moment for my club and team, Fenerbahçe Ülker. I also want to thank my teammates and coaches and everybody at Fenerbahçe Ülker who made this happen. It really is a big honor and means a lot to me."

The Serbian player, who is in his second season with Fenerbahçe, also represents the Serbian national basketball team internationally. He is a 2.09 m (6 ft 10¼ in) tall power forward and he can also play as a small forward and point forward.