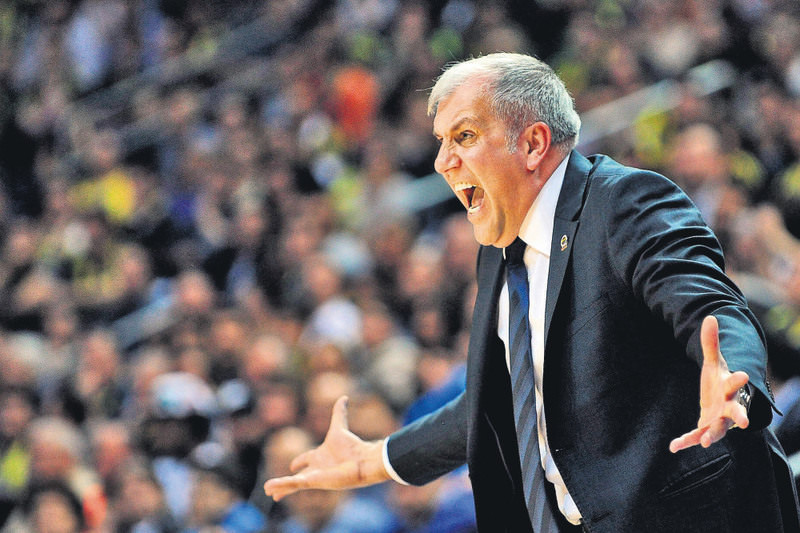 Fenerbahçe Ülker travel to Madrid to play in their first-ever Final Four, hoping to utilize their strong record away from home

One of Fenerbahçe Ülker's only two players with Final Four experience, Jan Vesely, has warned his teammates that one mistake can cost them their dream of moving into the EuroLeague final.

Fenerbahçe Ülker take on Real Madrid tonight in Game 1 of their semi-final in Madrid, the venue for all the tournament's Final Four games. Though the Istanbul giants will be playing away from home against one of Europe's traditional powerhouses on their home floor, Fenerbahçe Ülker can go into the game with confidence after going eight months without an away defeat in the EuroLeague. The Kadıköy side have also won 13 of their last 14 games.

Working against Fenerbahçe Ülker however, is the fact that so few of their players have Final Four experience, while Real Madrid boast a wealth of experience.

Only Nikos Zisis and Vesely can claim to have acquainted themselves with the cauldron atmosphere of Final Four basketball. Ricky Hickman would be on that list, but an injury has ended his season.

Vesely played back in 2010 when Partizan Belgrade made a surprise trip to the semi-finals. Back then, Vesely was one of Europe's most talked about young players, nicknamed the Flying Ninja, and was a year away from being drafted by the Washington Wizards - at No. 5. As a senior member of the squad, Vesely has warned his teammates about the pressures of Final Four basketball.

"It is always better to have the experience and to know a little bit [about] what is going on in the Final Four," said the Czech star. "We have to be focused all 40 minutes. One mistake can cost you a game. We know that; we have been there, so we will try to make sure everyone understands that. One basket or one mistake can cost you a loss; that happened to us when I was with Partizan in 2010. The Final Four is the kind of tournament [where] you need to be completely focused [during] all games, 40 minutes. One turnover or one mistake and it could be over. Being focused is the main thing. [We need to j]ust play hard, be strong under the boards and stuff like that. We just have to play hard and be ourselves, that's it. Of course, we will have to make some adjustments and we will prepare a couple of things for the game."

Despite the scintillating form Fenerbahçe Ülker have been enjoying of late, neither Vesely nor anyone else in the squad are getting too excited. "We are not thinking that way," said Vesely. "We are just trying to focus on the next game, from one game to another. We try to put things behind us, try to see the goal in front of us and what we have to do to achieve it. The next goal is the next game, and this is what we are focused on. I think these results make us feel more confident. Of course, it is not the typical road game; this is a Final Four game. We were able to win on the road in the regular season, Top 16 and playoffs. I think the pressure is on Madrid, and we can use that to our advantage."

While Fenerbahçe Ülker lack experience on the court, off the court that have perhaps the most experienced coach in Europe. Zeljko Obradovic has won eight EuroLeague titles dating back to 1992, back when Vesely was just 2 years old. Now in his second season in Istanbul, Obradovic has begun to make his mark on the team, fashioning a cohesive unit that have developed the mental strength to become seemingly impregnable away from home, as well as coasting through the quarter-finals - sweeping reigning champions Maccabi Tel Aviv.

For Vesely, Obradovic could be a key factor. "He coached Panathinaikos for many, many years, and this is just his second season [at] Fenerbahçe," said the Czech. "He is still building the team and trying to get the players he likes. Most of the team already worked with him last season, and we added a couple of players this season. We have been practicing together since the beginning of the season, and now we have the right chemistry and know good things can come. Zeljko is doing his job the way he did it in all these years in Panathinaikos and motivating the players the right way. We understood that in the middle of the season, stayed together and played together."
Last Update: May 14, 2015 10:15 pm
RELATED TOPICS