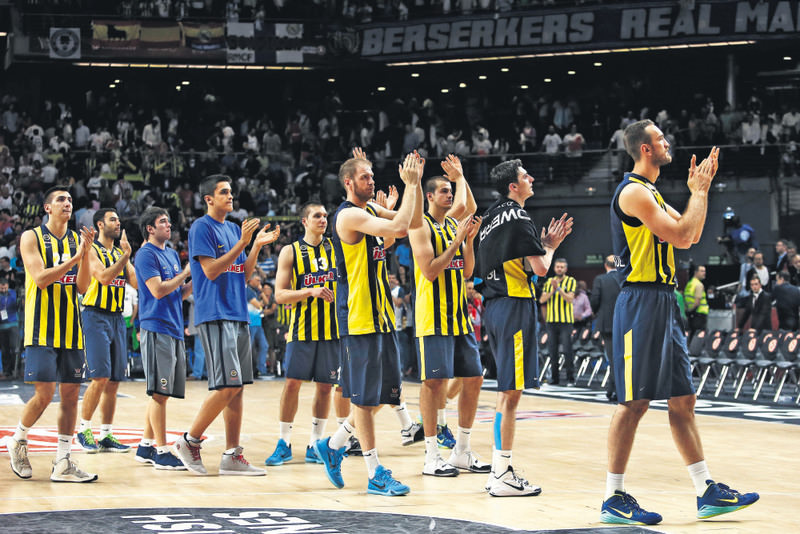 Despite being the better side for three quarters, Fenerbahçe Ülker crashed out of the Final Four of the EuroLeague on Friday night following a disastrous second quarter against Real Madrid, with the hosts winning 96-87.

In the club's first-ever Final Four appearance, the Istanbul giants gave a good account of themselves, both with their higher score in three of the four quarters but also for the way they dug back despite being behind by 20 points in the second quarter.

Well into the fourth quarter, Fenerbahçe coach Zeljko Obradovic implored his players that the game was still within reach, and at times the visitors looked as if they could get within touching distance. Unfortunately, Real Madrid's 35-14 second-quarter performance created too big a mountain for Fenerbahçe Ülker to climb.

Obradovic, a veteran of eight EuroLeague crowns over 20 years, praised his side's guts and expressed his confidence that the humbling experience will only help his players further down the line.

"I believe they played an excellent game tonight," said the Serb. "I am really proud of my team to make it to the Final Four for the first time in the history of the club. It's obvious we lost the game in the second quarter. We didn't have an answer. Any kind of defense, they punished us.

I was proud of the reaction, but it was too hard to recover from the second quarter.

This will help us in the future. And I hope Fenerbahçe Ülker comes to the Final Four again in the future. Real Madrid is a really aggressive team and we tried to prepare for that. They played the game how they played the whole season. They play together for the fourth year, it's a big advantage. They know how to play with each other. I [said] all these days that we really need to play well to have a chance to beat Real Madrid."

Experience is the watchword coming out of the Final Four. While Real Madrid are one of the most long-in-the-tooth sides in Europe, Fenerbahçe Ülker are green. Not only was it the club's first Final Four, it was also a first for all but two players: Jan Vesely and Nikos Zisis. Ricky Hickman would have been a third if not for an injury.

Like all up-and-coming teams, a heartbreaking loss in a semi-final is something of a rite of passage. As Vesely warned before the game, a team cannot afford to slack off at any point. Fenerbahçe learned this lesson in the cruelest possible way. The Istanbul giants outscored Real Madrid in every single quarter, but for the second. The margin in the second period was simply so large that they were unable to recover. Future experience should teach them to not allow a team to fly away in a single quarter. The season also has to be seen as a success for Fenerbahçe Ülker with Bogdan Bogdanovic and Nemanja Bjelica winning the EuroLeague Rising Star Award and MVP awards, respectively.

On the day, however, Real Madrid were simply too hot. The Spaniards, playing on their home floor, netted 14 3-pointers in the game, a EuroLeague record.

Fenerbahçe Ülker looked good after the first quarter with a 21-20 lead after Emir Preldzic's buzzer beater before Real Madrid reeled off a 14-2 run to take control of the game. A rain of 3-pointers gave Real Madrid a 55-35 lead at half time. Fenerbahçe Ülker would gamely chip away at the lead but never catch the hosts.

"They ran a break, they hit some threes," said Fener guard Andrew Goudelock. "Madrid shot 28 to 30 threes a game, and in the second quarter it seemed like they were making every three; everything. They were playing harder than us. In the second quarter, they gave us a knockout punch. It was tough to come back when you are down by 20 to a team at home. I take pride in the way we played at the end. We could have easily given up, just let the game get in our head. But we did a good job of fighting back, played a little more dirty like them, not giving up. That was a good sign."

Fenerbahçe Ülker played their third-place playoff dead rubber against CSKA Moscow after the time of print yesterday, while Real Madrid took on Olympiacos in the final, in a repeat of the 2013 EuroLeague final.
Last Update: May 17, 2015 9:21 pm
RELATED TOPICS