Fener and Gala square off from goal to hoop 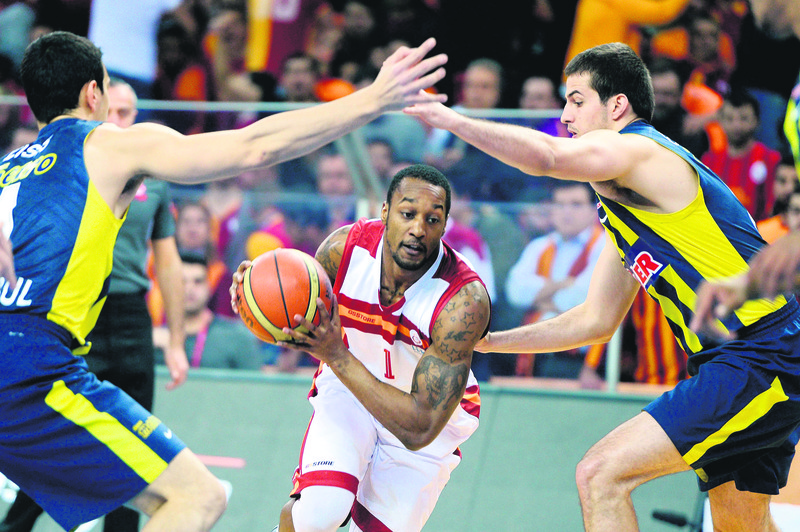 Justin Carter of Galatasaray advances among two Fener players in a March game between the two teams.
by Daily Sabah May 20, 2015 12:00 am

Galatasaray and Fenerbahçe, two archrivals in Turkish sports, will compete in the Turkish Basketball League (TBL) playoffs tonight. The two teams are already competing to win the title in the Spor Toto Süper Lig, with Galatasaray leading a few points ahead of Fenerbahçe.

Regular season champion Fenerbahçe Ülker, which made it to the Euroleague Final Four for the first time in their history last month, will face Galatasaray Liv Hospital, which placed eighth in the rankings and made it to the playoffs. The TBL quarter-finals follow a best-of-three format with the winner advancing to the semi-finals.

The second game is on May 24 at the Abdi İpekçi Arena and a final game in case of a draw will be played on May 27. The winning team will battle Pınar Karşıyaka or Banvit in the semi-finals. İzmir-based Pınar Karşıyaka took on Banvit yesterday as the news went to print.

The home teams came out as the winner in the regular season with Fenerbahçe Ülker beating Galatasaray Liv Hospital at the Ülker Sports Arena 85-74 while Gala won 92-88 against Fener at home. The two teams were also expected to square off in playoff final last season but the championship was awarded to Fenerbahçe when Galatasaray boycotted the game on the grounds of uncontrolled fan violence.

"This year marked the most competitive TBL regular season in history," TBL President Harun Erdenay said. "The fight for the playoffs came down to the season's final day, and I expect an entirely different level of fun and excitement in this year's playoffs."

"Our goal is for the TBL to be the undisputed best league in Europe," TBL Director Samer Şenbayrak said. "Some of the world's top basketball players will be taking the court in these playoffs, and I invite all of our fans to follow the elite competition about to unfold."

The current 2014-2015 season has been a banner year for Turkish clubs. Fenerbahçe Ülker went to Madrid for the Euroleague Final Four, Banvit reached the semi-finals of Eurocup and Trabzonspor reached the finals of the EuroChallenge. Turkey became the third country after Russia and Spain to send representatives to all three competitions' final fours in the same year.
Last Update: May 20, 2015 10:47 pm
RELATED TOPICS