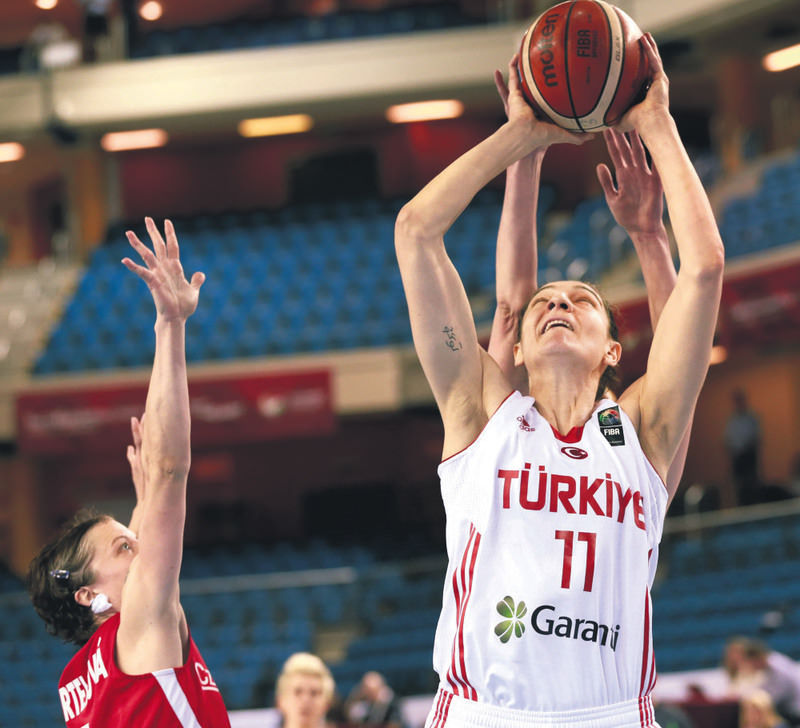 With Turkey's women's national basketball team winning three consecutive games, they advanced to the quarter-finals as the leader of Group E

The Turkish women's basketball team defeated Czech Republic 59-48 in their third game of Group E in the second round of the European Women Basketball Championship in Hungary.

With this result, the "Fairies of the Basket" advanced to the quarter-finals as the leader of Group E. Their first match will be on June 24. Sunday's victory came on the heels of a strong performance against Montenegro, which Turkey beat 61-41 last Wednesday.

Ten years ago, Turkey hosted the event as they made a Final Round debut as host nation. They have since gone on to take a silver medal in 2011 and then a bronze medal two years ago in France. That last accomplishment was sandwiched in between a maiden Olympic experience at London 2012 and last year's inaugural appearance at the FIBA World Championship for Women as hosts, when they delivered a semi-final performance.

A Turkish legend and one of the great European players, it was a day of celebration when veteran star Nevriye Yılmaz deferred her decision to retire and agreed to continue a little longer. She is actually playing some of the best basketball of her glittering career right now and heads to the Final Round in great form after working with new head coach Ekrem Memnun to help Galatasaray Odeabank retain their TKBL Championship crown. She is the anchor, the leader and inspiration for others on her team - especially the younger players.

There is a good selection of potential rising stars who could emerge at this tournament, including center Tilbe Şenyurek and forward Cansu Köksal, who both debuted last year in Ankara and Istanbul. There is also a chance for Pelin Bilgiç, Ayşe Cora and Olcay Çakır to make the final cut this time around. All three have enjoyed highly productive youth careers.

While she still has some work to do to grab a place on the final roster, some very good things are being said about Pınar Demirok of late after her efforts with AGÜ Spor Kulübü in the TKBL. If she gets the opportunity to go to Romania next month, the flexible forward might be a player who contributes some valuable cameos and sneaks under the radar of other teams.

Memnun said they have still not played their best game. Memnun said, "We have been improving our game style day by day. We play cleverly. We will play the next match for a place at the Olympics. Everybody in team is aware of that. We will be ready and no matter who the rival is. I'm trying to tell my players how attacking is important."
RELATED TOPICS