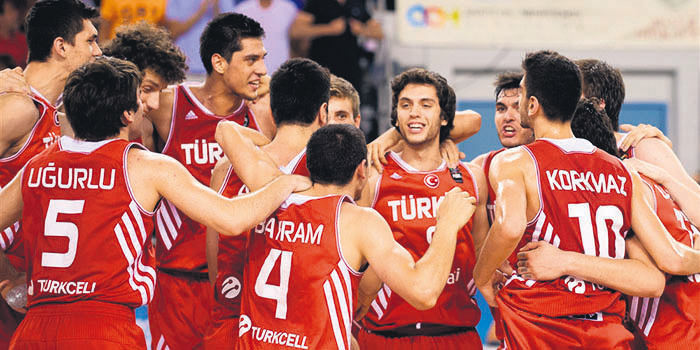 by Daily Sabah Jul 06, 2015 12:00 am
While the United States beat Croatia 79-71 in overtime, to become the first team to win the U19 division back-to-back since 1983, Turkey defeated Greece 80-71 to win the bronze medal at the FIBA U19 World Championship, held in Crete, Greece. The trip to the podium marks Turkey's best ever result in the tournament. "I congratulate head coach Ömer Uğurata, his staff, and all the national team players on this historic accomplishment," Turkish Basketball Federation President Harun Erdenay said. "This is a fantastic day for Turkish basketball, and these young athletes have made their country proud yet again." "Whatever we wanted, the kids executed exactly that on the court," Uğurata said. "We won, and we're really happy." "We're one of the three best teams in the world, this was a very special tournament for me," point guard Berk Uğurlu said after the game.Turkey entered the bronze medal-game on the heels of a loss to Croatia in the semi-finals and finished the tournament with a 6-1 record. Korkmaz finished the tournament as the team's leading scorer, averaging 13.7 points. He was named to the All-Tournament Team in recognition of his impressive performance, becoming the first Turk selected for such an honor at a FIBA U19 World Championship. Güven averaged 10.3 points and 5.6 rebounds in Crete.

Turkey's best prior finish at the FIBA U19 World Championship came in 2007 when the team finished in seventh place. The U19 national team entered the tournament after winning back-to-back U18 European Championships in 2013 and 2014.
Last Update: Jul 06, 2015 8:30 pm
RELATED TOPICS