Cedi Osman: The leader of the next generation 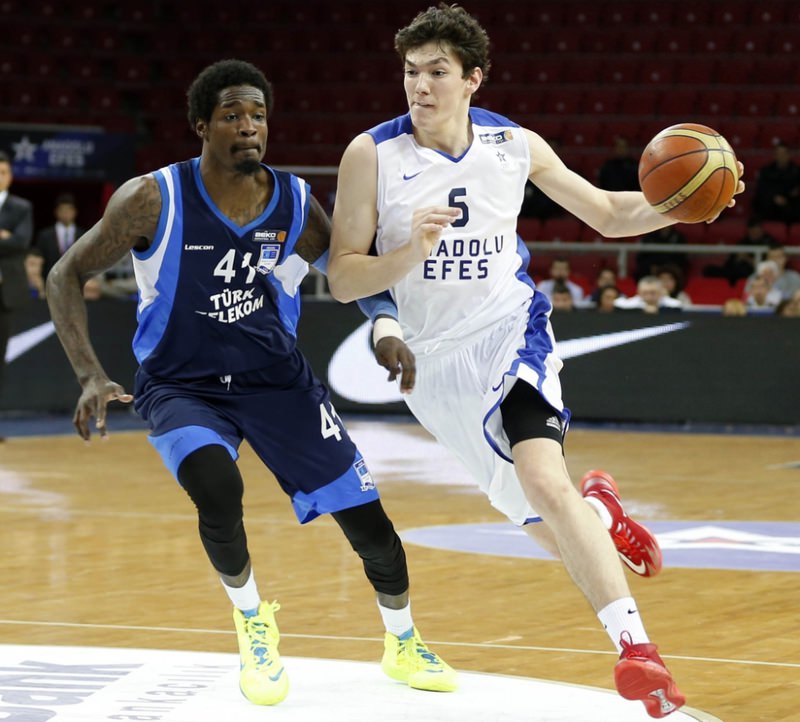 With plans to go to the NBA in two years and his eyes on European glory with Efes, Osman is getting ambitious as he prepares for EuroBasket 2015

Last summer, Cedi Osman was a wide-eyed teenager playing at international basketball's biggest tournament, the World Cup, just hoping to get on the court and impress the stars that surrounded him.

A year on, the Anadolu Efes forward is now a confident young veteran destined for the National Basketball Association (NBA) who is going to EuroBasket 2015 as an almost senior member of the team and the leader of a burgeoning group of young players.Turkey coach Ergin Ataman has already earmarked Osman as a standard bearer for the next generation and the youngster is already putting pressure on himself to perform on the big stage. Ataman also told Daily Sabah that Osman will be a starter at EuroBasket, a huge honor for Osman as well as a huge responsibility.

But EuroBasket and success therein is just one of the many goals on Osman's to-do list. A key player for Efes, a Cleveland Cavaliers draftee, national team starter and recognized face, Osman is a player on the rise.

"Last year at the World Cup was really a big experience for me," Osman told Daily Sabah. "Even though I played just five, six, seven minutes in each game, it was still a very big thing for me because I didn't expect to go. Coach Ataman took me to the World Cup, he believed in me and I think I gave my best for the team. It was a big experience for me and I hope that this year I will be able to help the team more. The first two years of my career I have been at Efes, so I want to be successful with Efes, I want to win the EuroLeague championship and then I want to go to the NBA. I have two more years on my contract and I think after these two years I will go to the NBA."

Before Osman can worry about going after European glory with Efes or running fast breaks with LeBron James in the NBA, there is the small matter of EuroBasket 2015 to worry about. Osman and his teammates have recently been in İzmir on a team-building exercise, getting to know each other, before they moved on to Italy where Ataman has been putting the players through their paces and working on new schemes.

Osman is the leader of an exciting new Turkish generation that will get its first run in senior action in September. The U18 team has won two of the most recent European Championships while Turkey has also collected medals at the U19 World Championships and U20 Euros, where Osman last won MVP honors. Turkey's preliminary squad for EuroBasket 2015 includes Osman, Furkan Korkmaz, Kenan Sipahi, Emircan Kosut, Kartal Özmizrak and Akif Egemen Güven, all of which are currently 20 or younger. Ataman has also said that at least three of those names if not more will make the final squad. Like Osman, Sipahi and Korkmaz have won international MVP honors and make up a nucleus of a strong Turkey side in the future. With Osman already on an upward trajectory, heading for the NBA, he feels a certain responsibility to his fellow youth.

"I feel some responsibilities and I want to take on these responsibilities. And I think it will be good this year," Osman said. "We have been in İzmir, just getting to know each other better, just to feel the ball, the court, the rims, and I think in these five days we had a lot of fun; I think it was good preparation for us."

How much time each youngster gets on the court, however, remains to be seen. Turkey are placed in a viciously tough group that includes perennial contenders Spain and Serbia as well as hosts Germany - who also have NBA legend Dirk Nowitzki in the squad for the first time in four years - and up-and-coming side Italy. After the World Cup last year, Osman knows how important it is to enjoy every minute of these occasions but thinks that Turkey has the squad to compete.

"We are in a tough group," Osman said. "Spain, Italy and Serbia are really tough teams and really good, but I think we are also a good team. We have good players. Furkan Aldemir [and] Ersan Ilyasova play in the NBA; I think they can help us. Also, if we play like we play all the time, we can do well."

Seeing Osman in person and on the court presents a certain amount of contradiction. He has a strikingly young face, hardly surprising for a 20-year-old, with innocent eyes and an easy smile. His head, however, perches on vast shoulders that the youngster has been working on as he makes the journey from slim and svelte teenager to NBA player. Unlike a lot of basketball players, Osman is proportional and walks with none of the rocking hobble that many his size do. Behind his schoolboy eyes, though, lies a fast and perceptive brain that harbors one of the most competitive spirits in Turkish basketball.

When Osman was drafted at No. 31 this year by the Cleveland Cavaliers - who were in the NBA Finals just a few months ago with LeBron James at the helm - while some eyebrows were raised, the league's most experienced scouts praised the Cavs for grabbing a player that will almost certainly contribute at the highest level. The scouting report gave two details consistently: Poor shooting, but high motor.

Hitting just 30 percent of his 3-pointers in EuroLeague action last year, Osman's biggest weakness is clear, although fortunately it is not a problem that need define his career. His action is not broken and his work ethic should be enough to overcome it. What's more, he knows his weaknesses. "I like to improve my shot, my spot up shots," Osman told Daily Sabah, before emphasizing the work he continues to put in on his body.

Osman's heart and spirit on the court have captivated many a scout and coach. In many ways he is the perfect kind of quality starting player: Humble, hardworking, aggressive, skillful and aware of his limitations. His general demeanor is of a confident man but everything is underscored by a need to do better. There is no trace of ego and he refuses to read anything about himself in the newspapers or online. "I prefer to stay inside myself," Osman said. "I think that I just need to concentrate on basketball, the national team and then the club. I don't like to read about myself even if it's good. I prefer to stand to the side and to just not read any of it."
RELATED TOPICS