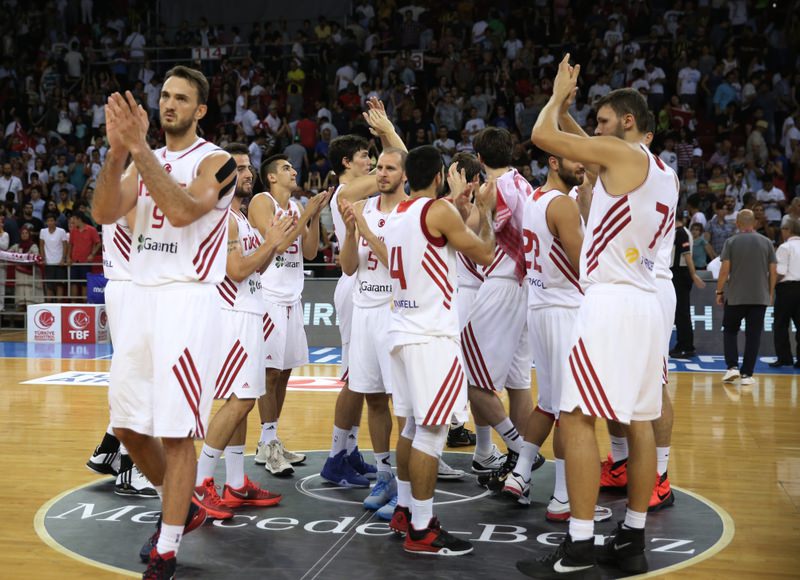 by Daily Sabah Aug 17, 2015 12:00 am
The 12 Giant Men gave themselves hope ahead of EuroBasket 2015 following three consecutive wins in their preparation friendlies played in Istanbul. On Saturday, in Istanbul the Turkey finished off a 3-0 home stand with a 73-64 win over Greece. A triple from Bobby Dixon with roughly 4:30 to go in the game stretched the lead to 64-57. A Nikos Zisis three cut the gap to 65-62, but that was as close as the visitors would get. Dixon finished with 12 points. Semih Erden delivered another strong game in the paint, registering 15 points and 11 boards. Cedi Osman and Melih Mahmutoğlu also chipped in on offense, registering 11 points each. Giannia Bourousis had a game-high 17 points on 6-9 shooting from the field for Greece.

"This was a very serious win," Turkey Head Coach Ergin Ataman said after the game. "This is a team [Greece] that, like us, has a high chance at a medal at the European Championship." The 12 Giant Men departed Istanbul yesterday for Lithuania, heading for the Huawei Cup, where they will be joined by the host country, Croatia, and the Former Yugoslav Republic of Macedonia. Following the game Ataman announced that centers Emircan Koşut and Egemen Güven had been cut from the roster, but had high praise for the youngsters.

"They are players that will shape the future of Turkish basketball," Ataman said. Previously, the 12 Giant Men defeated Tunisia 76-50 and Bosnia and Herzegovina 66-58 , as their preparation for EuroBasket 2015 continues. Prior to Saturday night's game Turkish basketball legends Hidayet Türkoğlu and Kerem Tunçeri were honored for their service to the national team in a ceremony at half-court. President Harun Erdenay and TBF Board Member Dinçer Çetintaş presented each player with framed national team jerseys.

"Hidayet Türkoğlu and Kerem Tunçeri's contribution to Turkish Basketball over the years has earned them a place in our country's sporting history," said TBF President Harun Erdenay, who as a player won a silver medal at EuroBasket 2001 with the honorees. "In addition to the silver medals won at EuroBasket 2001 and the 2010 FIBA World Championship, with their character on and off the court they have come to represent the best of Turkish Basketball."

Türkoğlu retired from the national team following EuroBasket 2013. Over his career he represented Turkey in international competition 309 times and scored a total of 3,475 points.

Tunçeri competed for the national team at last summer's FIBA Basketball World Cup, in which he helped the 12 Giant Men reach the quarterfinals. He represented Turkey in international competition 311 times and registered 1,991 points.
RELATED TOPICS