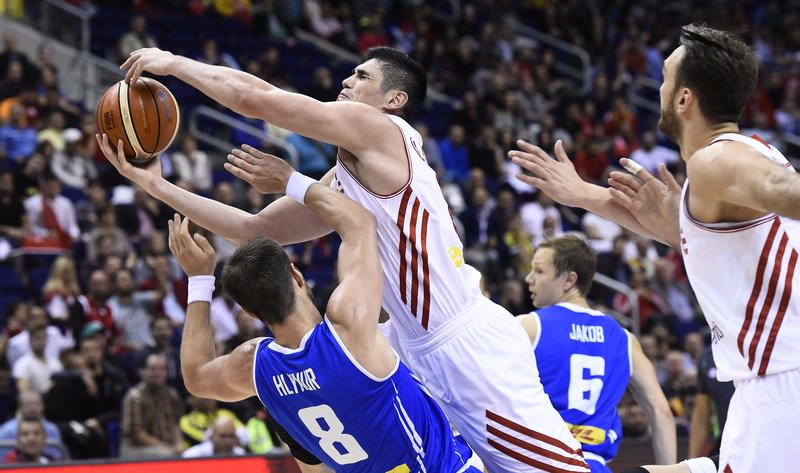 Turkey managed to conclude its Group B games in Eurobasket 2015 with a victory against Iceland and is now preparing to face France, the defending champions

Turkey defeated Iceland 111-102 in overtime in their fifth EuroBasket 2015 group game on Thursday evening in Berlin, wrapping up its matches in Group B with a 3-2 mark in fourth place.

The team will take on France, leader of Group A and a favorite for championship finals who will have the advantage of playing at home when they host Turkey's "12 Giant Men" in Lille on Saturday.

Iceland proved challenging in the second quarter with 10 points in the first minutes and the quarter ended at 47-47 with Ali Muhammed once again helping Turkey to boost their point total in the last minutes.

Though Cedi Osman and Ali Muhammed led the scoring in the early quarters, Semih Erden made an impression in the third quarter by reaching his 12 points for the game.

The fourth quarter opened with Turkey being hurt by Iceland's consecutive 3-pointers putting the Turkish team in danger with only a one-point advantage in the first four minutes. Osman once again rushed to help the team to get ahead but Iceland, benefiting from Ali Muhammed tripping in the last seconds, nailed a 3-pointer, leading to overtime. Overtime proved fruitful for Turkey, who wrapped up the game with a score of 111-102. Ali Muhammed and Cedi Osman was as usual the highlight performers of the game with 28 and 22 points respectively, followed by Semih Erden who scored 18 points. Ersan İlyasova, who shined in Turkey's earlier games, contributed greatly in overtime.

Speaking to the media after the game, Turkey's coach Ergin Ataman said it was a tough game but a smart offense saved them. Ataman praised Iceland, a newcomer to the Eurobasket tournament who proved challenging for its rivals throughout the event. "Iceland has a good defense and we had a hard time in matching up our players due to a big size difference. In the end, we won with good offensive play and by taking advantage of the replacements in the Icelandic team," he said. Answering a question about the underuse of young players Kartal Özmızrak and Furkan Korkmaz, Ataman said the two players were not ready enough.

Ataman said they had a realistic target of securing three wins and they achieved this although they failed to reach to their ultimate goal in getting in the top three in the group. "Results were surprising. Italy's win over Spain affected our calculations," Ataman said. He was hopeful for the France match. "It is not an unbeatable team. After all, we defeated Germany in their home," he said.