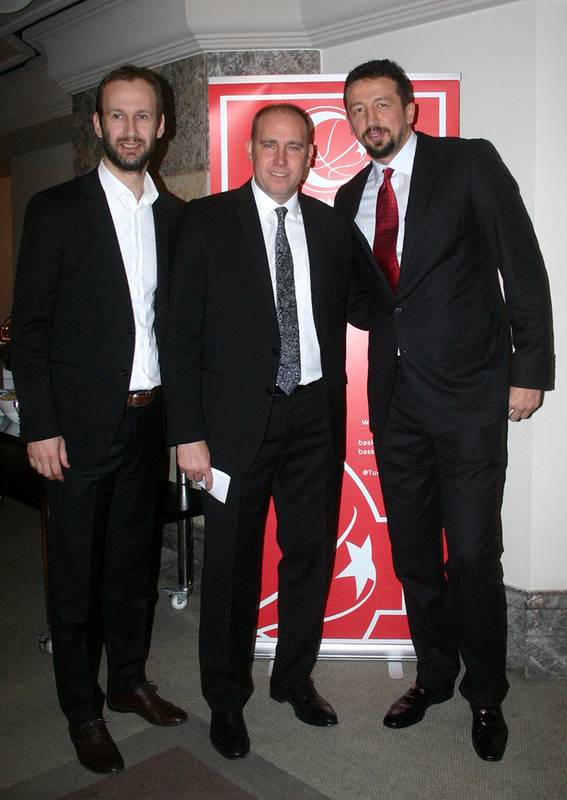 by Daily Sabah Nov 16, 2015 12:00 am
The Turkish basketball legend Hidayet "Hedo" Türkoğlu was announced as the new CEO of Turkish Basketball Federation (TBF) by TBF President Harun Erdenay at a press conference in Istanbul yesterday.

Türkoğlu joined the TBF after a playing career that included 15 seasons in the NBA with the Sacramento Kings, San Antonio Spurs, Orlando Magic, Toronto Raptors, Phoenix Suns and Los Angeles Clippers. A long-time leader of the Turkish national team, he won silver medals at EuroBasket 2001 and the 2010 FIBA World Championship, both of which took place in Turkey.

"In addition to his fantastic NBA career, nearly every summer Hidayet represented Turkey on the national team and inspired millions across our country," Erdenay said. "As CEO, Hidayet will continue to serve Turkish basketball, and our federation will benefit from his experience and leadership."

Answering a question about whether Türkoğlu will run as a candidate for the upcoming TBF presidential elections, Erdenay said that with his great services to Turkey, Türkoğlu would be a very suitable candidate in the future. "I previously announced my candidacy. Now Hidayet is with us. He received very good offers in executive positions from NBA clubs, primarily the Orlando Magic, but he chose the TBF despite all these offers. I would like to thank him," Erdenay said.

Türkoğlu announced his retirement last Friday. Drafted by the Sacramento Kings 16th overall in 2000, he was named the NBA's Most Improved Player for the 2007-2008 season after averaging 19.5 points, 5.7 rebounds and 5.0 assists with Orlando. In 2008-2009 he helped lead the Magic to the NBA Finals.

In 309 games representing Turkey in international competition he scored a total of 3,475 points. At EuroBasket 2001 he averaged 15.5 points per game on the way to the podium. At the 2010 FIBA World Championship he captivated Turkey as team captain, leading the 12 Giant Men with 12.3 points, 4.2 rebounds and 3.4 assists. In recognition of his performances he was named to the FIBA World Championship All Star Five.

"Here [at the TBF] I'm going to do everything I can for our people and youth," Türkoğlu said. "I'm someone who gives a lot of importance to Turkish sport. My wish is for there to be Turkish basketball players around the world and that they represent us in the best way possible. We have to put forward a vision for our young people."

The appointment marks a reunion for Erdenay and Türkoğlu, who were long-time team-mates on the national team. Erdenay was captain of the 12 Giant Men in 2001. He also served as general manager of the team in 2010 when Turkey achieved the best result in its basketball history by winning the silver medal at the 2010 World Championships.
Last Update: Nov 16, 2015 4:48 pm
RELATED TOPICS