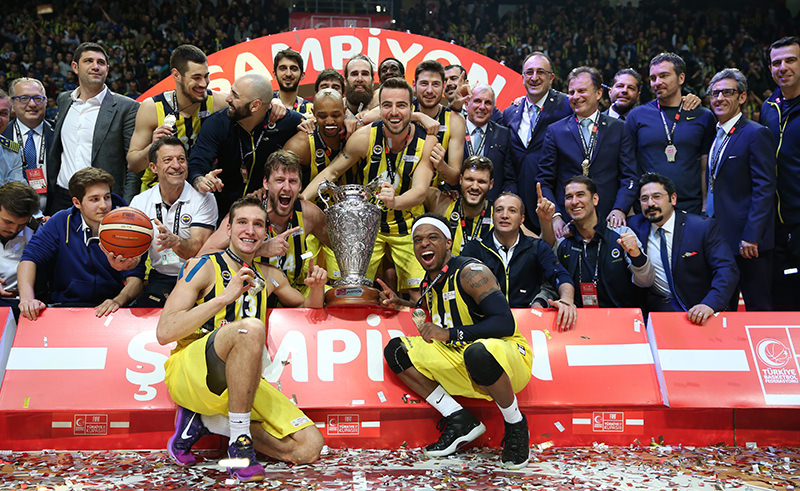 Fenerbahu00e7e won the FIAT Turkish Cup with Bogdanovicu2019s last-second triple Feb. 21, 2016. (AA Photo)
by Daily Sabah Feb 21, 2016 12:00 am
It's not over until the fat lady sings, says the idiom and this was definitely Fenerbahçe's motto on Sunday night's Spor Toto Basketbal League final.

With one point behind Darüşşafaka Doğuş with a 65-64 score, Fenerbahçe guard Bogdan Bogdanoviç took a leap of faith exactly 2.4 seconds left to game-end.

His three-pointer at the last-second delivered his team a 67-65 win over Darüşşafaka Doğuş, giving Fenerbahçe its fifth Turkish Cup in club history.

Bogdanovic's standout performance and 21 point score also got him a well-deserved MVP title in the match.

The thrillling game saw many twists and turns.

With 9:41 to go on the clock, Fenerbahçe was leading the game 57-51. However, Darüşşafaka Doğuş's Manuchar Markoishvili's critical three-pointer followed by teammate Scottie Wilbekin's 5 in-a-row points gave Fenerbahçe a brief shock.

As the clock showed 4:31 to go, Fenerbahçe's Datome tied the game at 59-59. With Bogdanovic's triple soon after, Fenerbahçe reclaimed the lead 62-59.

Darüşşafaka Doğuş made a final leap with Wilbekin; his successful shot gave his club a 65-64 advantage, which then set the stage for Bogdanovic and his three point game-winner.

After beating Demir İnşaat Büyükçemece 89-69 in the quarters and Pınar Karşıyaka 82-72 in the semifinals, Fenerbahçe got a ticket to the finals; and with Darüşşafaka's 83-52 win against Trabzonspor Medical Park in the quarters and 76-74 defeat of Banvit in the final four the two teams were ready to clash to win the much-coveted FIAT Cup.

The Turkish Cup was first organized during the 1966-67 season, with Fenerbahçe coming out on top. The tournament has been played continuously since the 1991-92 season. Anadolu Efes have hoisted the cup a record 10 times, including last year in Gaziantep.