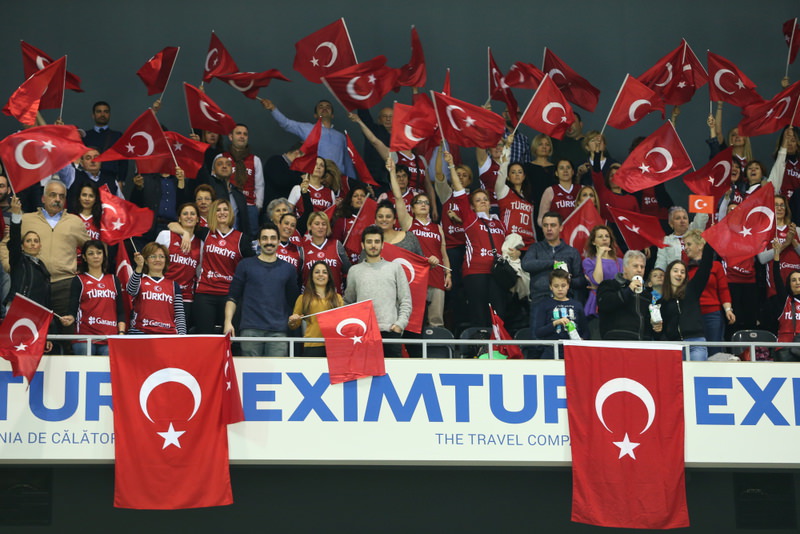 Turkey first faced Romania in women's basketball at the Balkan Championship in 1966. The Romanians came out on top 55-50 in a game that former team-mates Emine Paksoy and Dirayet Yıldırım remember well.

On Saturday night in Cluj-Napoca Turkey's women took to the hardwood, not concrete, against Romania in a EuroBasket Women 2017 qualifying game, returning home with a 56-45 win. The victory brought the team's record to 3-0, good for first place in Group H.

Fifty years after the Balkan Championship Paksoy and Yıldırım were present again, this time as two of 40 former women's national team players and staff brought to Romania by the Turkish Basketball Federation (TBF) to cheer on the victors.

"Turkish basketball has a very rich history, and these women are a critical part of that history," TBF President Harun Erdenay said. "This year we are aiming to qualify for the 2016 Olympics, and this was the perfect opportunity to honor the individuals who laid the foundation and helped make these Olympic dreams possible."

Turkish women's basketball has been one of the country's biggest athletic success stories in recent years. With athletes such as Nevriye Yılmaz, Birsel Vardarlı Demirmen, Şaziye İvegin Üner, and Işıl Alben leading the way, the team medaled at the 2011 and 2013 FIBA EuroBasket Women. In 2012 the team qualified for its first Olympic Games and finished fifth in London. In 2014 the team reached the semi-finals of the 2014 FIBA World Championship for Women, held in Turkey. This summer the team has a chance to return to the Olympic Games when it heads to Nantes, France in June for the FIBA Olympic Qualifying Tournament for Women.

It's a level of success that is a source of pride for the players and coaches who helped give women's basketball its start in Turkey.

"We'll always be there to support them, they've really made us proud," said Çiğdem Ertem, who won a silver medal at the 1987 Mediterranean Games as part of the national team that helped revive the women's national team after a two-decade hiatus. "I think it's something that distinguishes Turkey from other countries, the success of our national teams in women's sports both in basketball and volleyball."

The success on the court has inspired more girls to play basketball. One year after Turkey hosted the 2014 FIBA World Championship for Women the number of licensed women's basketball players in Turkey increased by 18.7 percent.

According to Ertem, the benefits extend far beyond the win column.

"The biggest characteristic people are looking for in business is to be able to work within a team when it's necessary and be a star when it's necessary," said Ertem, who is the Middle East, Turkey and Africa Regional Director for Intel Corporation. "Basketball was hugely beneficial to me reaching [this level] in my career. First, I always see myself as a team player and second, it gave me mental toughness."

In addition to taking in Turkey's win, the former players had time to swap stories about the game that binds them together.

Alev Gökçe was part of the first women's national team in 1964 and had been holding on to her number 10 jersey for the last half century before presenting it to Erdenay at a dinner on Saturday night. "I can't explain the happiness I felt when they handed out [the national team jerseys]," Gökçe said. "It was the most valuable thing in my house, but now it's where it belongs."

In return Gökçe received a new jersey autographed by the current national team players. She also had the opportunity to meet and pose for a picture with the Turkish player who currently wears number 10, star guard Işıl Alben.

"These are the people who paved the way for us," said Alben, who helped Turkey to victory against Romania with 12 points, 7 rebounds, and 5 assists. "To have the chance to chat with them one-on-one, to hear what they experienced, I'm just really happy. It was a very special feeling. In the games we play after this they will be an extra source of inspiration."

The win over Romania only added to the celebratory atmosphere.

Turkey's Senior Women's National Team returns to action Wednesday night when it faces Israel in Tel Aviv at 7:00 p.m. The game will be broadcast live on TRT Spor and the team is encouraging fans to show their support by wearing red and sharing selfies on social media with the hashtag #KırmızıGiydim, which means "I wore red."
RELATED TOPICS