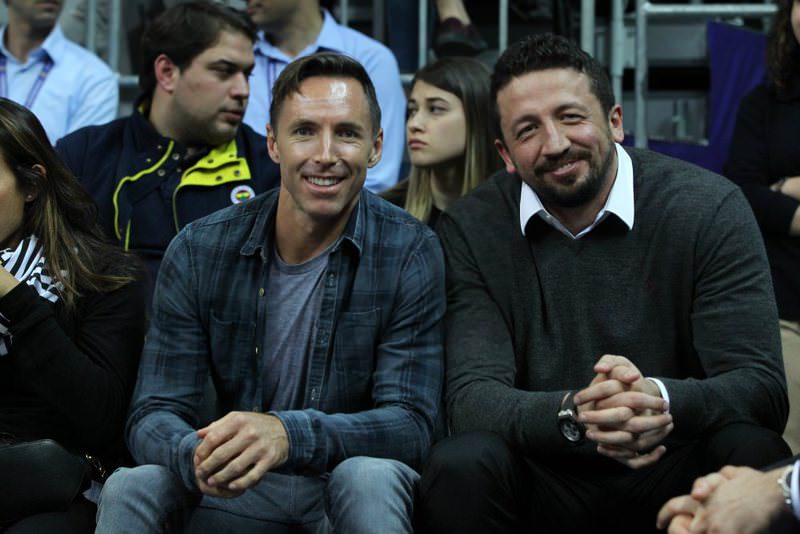 by Daily Sabah Mar 04, 2016 12:00 am
Five years removed from playing together in Phoenix, two former NBA stars are making their mark on the international game. For 25 games in 2010, Hidayet Türkoğlu and Steve Nash were teammates on the Phoenix Suns, both bringing an international flare to the NBA. The two legends were side-by-side again on Saturday night at Ülker Sports Arena in Istanbul, but this time as executives watching Fenerbahçe (15-4) battle Galatasaray Odeabank (13-6) in a Spor Toto Basketball League rivalry game. Both players had highlight-filled NBA careers. Nash was a two-time league most valuable player (MVP) and an eight-time all-star. Türkoğlu was voted most improved player in 2008, and helped lead the Orlando Magic to the NBA Finals in 2009. Alongside their NBA exploits over a combined 33 seasons, both boast impressive international resumes. Both retired from basketball in 2015 and are continuing to make their mark in international hoops. Nash has served as the general manager of Canada's Senior Men's National Team since 2012, while Türkoğlu joined the Turkish Basketball Federation as CEO last fall.

"For obvious reasons, we recognize that basketball is truly a global game, and we both want to leverage our experience to the benefit of basketball in our own countries and beyond," Türkoğlu said. Türkoğlu is not Nash's only Istanbul connection. Fenerbahçe General Manager Maurizio Gherardini serves with Nash on Canada Basketball's Council of Excellence. As for the game, Fenerbahçe got the best of its crosstown rival Galatasaray Odeabank, 80-63.

"It's a very high level of basketball, the atmosphere was incredible," Nash said. "The game was very cool with high level, skilled and smart players, and exciting coaches."
RELATED TOPICS