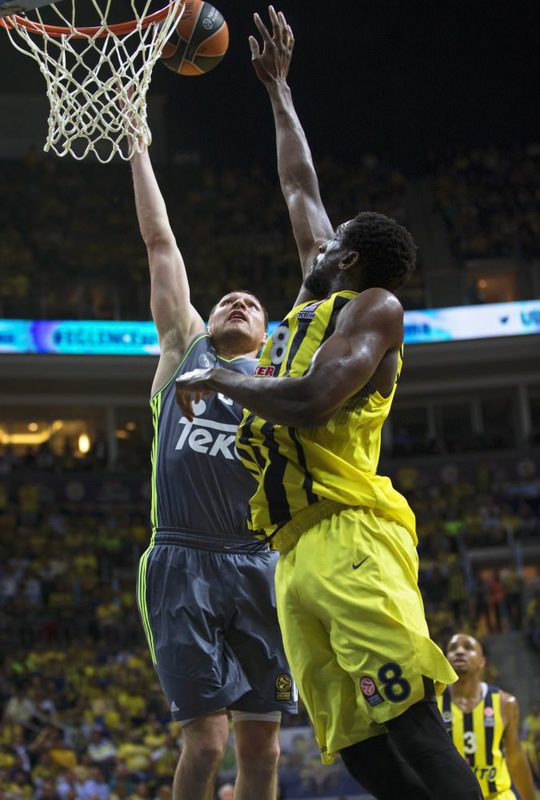 by Hakan Baş Apr 19, 2016 12:00 am
Fenerbahçe will play against defending champions Real Madrid in their third playoff match in the Turkish Airlines Euroleague Playoffs on Tuesday.

If Fenerbahçe beat the Spanish giant for the third consecutive match, they can advance to the Final Four. Real Madrid will host Fenerbahçe in the Barclays Center, Madrid, Spain Tuesday night. Fenerbahçe put on a show for their fans at the Ülker Sports Arena on Thursday by dominating Real Madrid 100-78 to take a 2-0 lead in their best-of-five Turkish Airlines Euroleague Playoffs series. If Real Madrid win the match, the fourth playoff match will be played in Madrid on April 21. If Fenerbahçe are beaten again after that, the fifth and final match of the playoff series will be played in Istanbul on April 26.

Six-time Euroleague winners CSKA Moscow and the nouveau riche Fenerbahçe are closing in on the competition's Final Four after taking commanding 2-0 leads against their rivals in the best-of-five quarter-final series on Thursday. Real, the royalty of European club basketball seeking a record-extending 10th title, face the daunting task of repelling potent and fired-up challengers. Fenerbahçe, who lost to Real in last year's semi-finals, look a different prospect this season and one capable of becoming the first Turkish side to win Europe's premier club competition.

Fenerbahçe coach Zeljko Obradovic has used 11 different starters and 15 players overall in Euroleague games so far this season. No player has started every game. Zeljko Obradovic coached Real Madrid head coach Pablo Laso at Madrid for two seasons during the mid-1990s. They won the 1997 Saporta Cup together. Fenerbahçe's Ekpe Udoh leads the league in blocked shots with 2.1 per game; Udoh has blocked at least one shot in 12 straight Euroleague games. Udoh was a team-mate of Real Madrid's Gustavo Ayon during the 2012-13 NBA season with the Milwaukee Bucks.
RELATED TOPICS