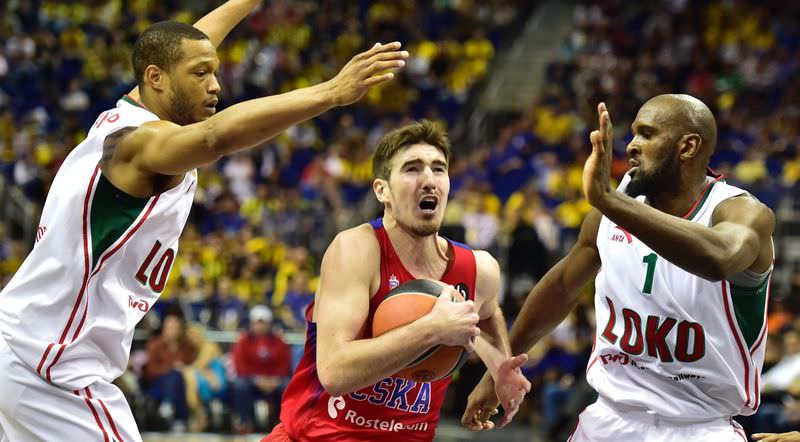 by May 13, 2016 12:00 am
Six-time Euroleague winners CSKA Moscow beat fellow Russians Lokomotiv Kuban Krasnodar 88-81 to reach the competition's final after an outstanding performance by their French guard Nando De Colo on Friday.

De Colo, who was named the season's most valuable player and also finished as its top scorer, netted 10 of his game-high 30 points in the first quarter and 14 in the third as CSKA pulled away in the opening stages.

With Lokomotiv seemingly suffering stage fright in their maiden Final Four appearance, CSKA romped to a 9-0 lead which soared to 35-21 midway through the second quarter.

Lokomotiv hauled themselves back into the game thanks to a flurry of offensive rebounds in the Mercedes-Benz Arena, where rival Russian fans created a cracking atmosphere.

Lethal three-point shooting allowed CSKA to stay in the driving seat when their rivals pressed hard and reduced the deficit to 52-45 in the third quarter.

Malcolm Delaney, who shone for Lokomotiv with 26 points, hit an audacious shot from the halfway line on the buzzer in the third quarter, slashing CSKA's advantage to 68-59.

But the season's surprise packages, who reached the Final Four in only their second Euroleague season, could not force a twist in the final period as CSKA kept their nerve after Lokomotiv had reduced the gap to 84-79 with 30 seconds left.

"My performance was the result of a fitting team effort and the most important thing in the final will be to play as aggressively as we did today," De Colo told reporters.

Vorontsevich said: "It was a tough game, a local fight between two Russian teams but overall it's a great achievement for our country."

Teodosic, looking for his first Euroleague trophy in his seventh Final Four, added: "It will be a cracking game whoever we face. I hope my time has come but it's going to be tough."

The final and the third-place playoff is on Sunday.