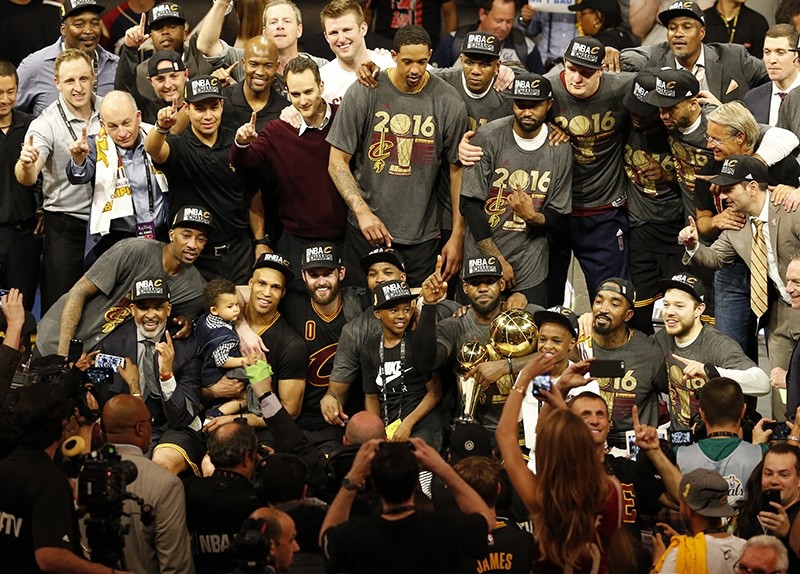 Cleveland Cavaliers pose for a team photo with the NBA Finals Championship Trophy after defeating the Golden State Warriors in NBA Finals game seven (EPA)
by Jun 20, 2016 12:00 am

The Golden State Warriors closed out a record-smashing season with an even more epic playoff collapse on Sunday, falling 93-89 to the Cleveland Cavaliers in Game Seven of the NBA Finals.

After storming through the regular season with a record 73 wins from 82 games, the Warriors penned another unwanted mark in the NBA record books on Sunday when they became the first team to squander a 3-1 Finals lead.

Until the Cavaliers no team in 32 tries had ever come all the way back from 1-3 down to win the NBA Finals.

To make it sting just a little bit more, the Cavs capped the greatest comeback ever in the NBA postseason at Oracle Arena, a virtual fortress where the Warriors had lost just four times all season.

Sharp-shooting Stephen Curry, the NBA's first unanimous most valuable player, struggled all series and in Game Seven again failed to deliver the type of scoring that had become his trademark, when a "Curry flurry" would put so many games out of reach.

"At home in the fourth quarter, I felt like we could go for that dagger punch and didn't really put any pressure on the defense," Curry said after the game. "That's something that is tough to kind of swallow with the opportunity we had in front of us."

Possibly still hobbled by lingering injuries he picked up during the lengthy playoffs, Curry never looked comfortable against the Cavalier defense, which sent multiple defenders at him and chased him off the three point line.

Cleveland also frequently set screens to switch him onto the Cavaliers LeBron James, ensuring Curry would get no rest on the defensive end of the court.

"We're stunned," Warriors coach Steve Kerr said after the game. "We thought we were going to win. I was extremely confident coming into tonight."

So too did a confident Warriors fan base who had not seen their team drop three consecutive games all season long.

The stage appeared too big for the untested big man, who failed to score and was ultimately limited to just over 10 minutes of playing time.

Kerr turned to backup center Anderson Varejao, but like Ezeli he was unable to score against the Cavaliers big men. Varejao and Ezeli combined for just one point and one rebound.

The Warriors were nearly saved by the aggressive play of All-Star forward Draymond Green, who made six three pointers, electrifying the crowd and helping push the Warriors to a seven point lead at the half. Green finished with 32 points.

But no one else was to able to match that kind of offensive production, including Curry, who scored 17 points, as Golden State were unable to claim the back-to-back championships that had seemed all but certain after seizing early control of the best-of-seven series.

"So win or lose, you appreciate the stage we were on and just that back and forth that we live for," said Curry. "So, yeah, it stung. It sucked to watch them celebrate, and we wish that would have been us.

"But at the end of the day, you congratulate them for accomplishing what they set out to do, and it will be a good image for us over the summer and all next season to remember so that we can come back stronger.