Sixers select Furkan Korkmaz with No. 26 pick in 2016 NBA draft 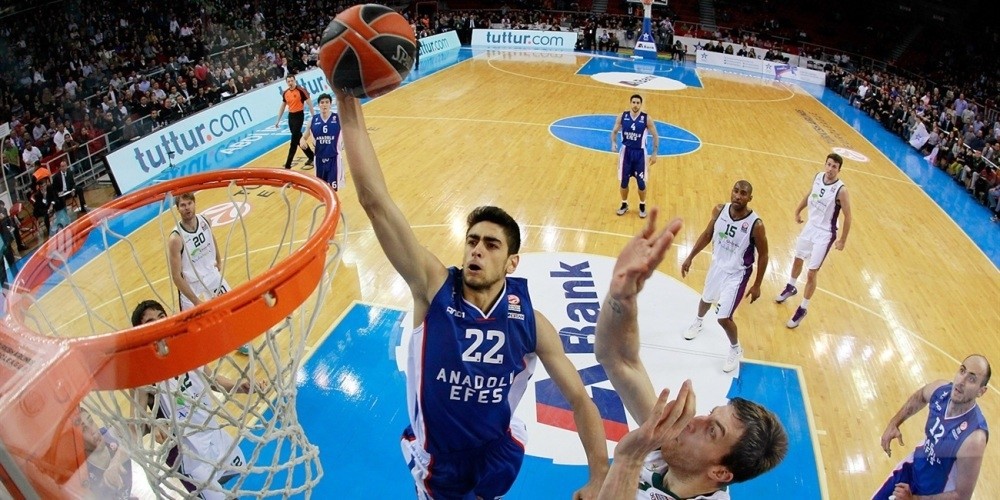 by German Press Agency - DPA Jun 25, 2016 12:00 am
Philadelphia 76ers selected Turkish guard Furkan Korkmaz with the No. 26 pick in the 2016 NBA draft. Korkmaz, 18, plays for Anadolu Efes in Istabul. Over the last couple years, Korkmaz has shown a ton of potential and has built a name for himself. He even won the Turkish League dunk contest dressed as Darth Vader. Korkmaz wants to come to the NBA sooner rather than later, which could convince a team to take a chance on him.He is a wiry wing scorer with strong athletic traits and lots of room to grow (he'll turn 19 in July). Although he's not dunking on people in games regularly, he's a big-time leaper. Korkmaz has a solid stroke from the outside in addition to some playmaking ability and touch in the lane. The NBA officially announced the other trades. NBA Commissioner Adam Silver announced the Philadelphia 76ers had selected Australian Ben Simmons with the top overall pick in the 2016 draft.

Simmons' skill set has been likened to NBA superstar LeBron James. The versatile forward averaged 19.2 points on 56 percent field goal shooting and grabbed 11.8 rebounds in his freshman season at Louisiana State. Simmons, 19, is expected to make an immediate impact for the lowly Sixers, who finished 10-72 last season, and a dismal 47-199 record over the last three campaigns. Coming off a franchise-worst 17-65 record, the Los Angeles Lakers selected Duke shooting star Brandon Ingram with the No 2 pick.

The slender 6-foot-9, 190-pound forward averaged 17 points per game and is projected to perform at all-star level in his first five years. At No 3, the Boston Celtics surprised many by tabbing small forward Jaylen Brown, who averaged nearly 15 points in his only season at California. In other trades, none of which were officially announced by the NBA,:The Indiana Pacers traded guard George Hill to the Utah Jazz in a three-way trade with the Atlanta Hawks. Atlanta sent guard Jeff Teague to Indiana and acquired Utah's 2016 first-round, which was forward Taurean Prince of Baylor, the 12th pick in the first round.

The Brooklyn Nets traded forward Thaddeus Young to Indiana for the rights to guard Caris LeVert of Michigan, the 20th pick, and a future second-round draft pick.

The Charlotte Hornets traded the rights to freshman guard Malachi Richardson of Syracuse, the 22nd pick, to Sacramento for guard Marco Belinelli.

The Boston Celtics traded the rights to freshman forward Deyonta Davis of Michigan State, the 31st pick, and forward Rade Zagorac of Serbia, the 35th pick, to the Memphis Grizzlies for a 2019 first-round draft pick.
RELATED TOPICS