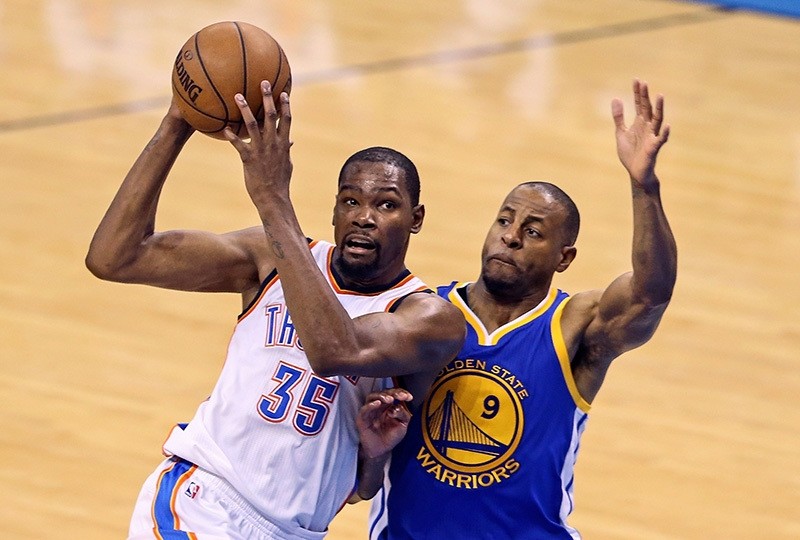 Former OKC Thunder forward Kevin Durant drives to the basket as Warriors forward Andre Iguodala (9) defends during Game 4 of the Western conference finals of the NBA Playoffs at Chesapeake Energy Arena, May 24, 2016; Oklahoma City (Reuters Photo)
by Compiled from Wire Services Jul 04, 2016 12:00 am

Former NBA Most Valuable Player Kevin Durant, the biggest prize on the free agent market, announced on Monday that he will join the Golden State Warriors.

A four-times league scoring champion and seven-times All-Star who spent the first nine years of his career with the Oklahoma City Thunder franchise, the 27-year-old forward said in a piece posted on the Players' Tribune website that it has been the most challenging time of his professional life.

"The primary mandate I had for myself in making this decision was to have it based on the potential for my growth as a player -- as that has always steered me in the right direction," Durant wrote.

"But I am also at a point in my life where it is of equal importance to find an opportunity that encourages my evolution as a man: moving out of my comfort zone to a new city and community which offers the greatest potential for my contribution and personal growth."

"With this in mind, I have decided that I am going to join the Golden State Warriors."

He joins a Warriors team that includes reigning league MVP Stephen Curry, won the NBA title in 2015 and finished runner-up in 2016 after a remarkable campaign in which they had a record 73 wins during the 82-game regular season.

Terms of the deal were not disclosed but Durant is reportedly expected to sign a two-year, $54.3 million contract with the Warriors.

The Warriors are still licking their wounds after slumping to a 4-3 NBA finals defeat to LeBron James and the Cleveland Cavaliers last month.

The 6ft 9in (2.06-meter) Durant took the Thunder to the brink of victory against Golden State in the Western Conference finals earlier last season, inspiring his team to a 3-1 series lead before the Warriors fought back to win 4-3.