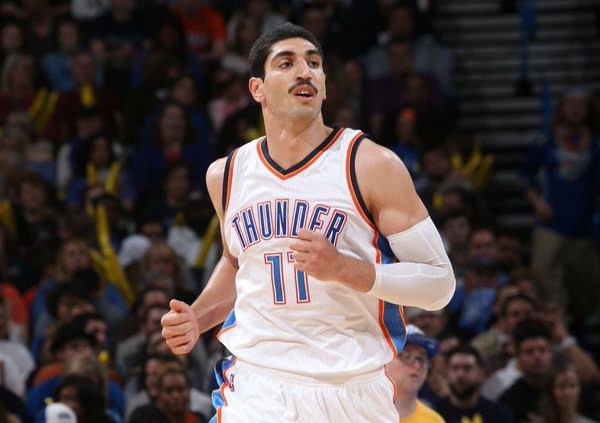 Prominent NBA player Enes Kanter, who is known for his staunch support of the Gülen Movement and its leader Fethullah Gülen, has been disowned by his family.

Kanter's father Mehmet Kanter disowned his son for his ties with the Gülen Movement. Saying that Enes was hypnotized by the Gülenist Terror Organization [FETÖ], his father wrote: "I apologize to the Turkish people and the president for having such a son."

Following the release of the letter, Daily Sabah reached out to Mehmet Kanter, who told Daily Sabah that he has been quite disturbed by his son's behavior and insulting tweets directed at President Recep Tayyip Erdoğan.

Stressing that he has been educating students for almost 30 years, Kanter said: "His statements and behavior trouble our family. I told Enes that we would disown him should he not change his course. He did not care."

The elder Kanter said he has not been able to communicate with Enes since 2015. "I would not have taken Enes to the U.S. for the basketball camp where his talent was discovered had I known that it would come to this point," he said.

Also speaking to Daily Sabah, Mehmet Kanter's cousin Bilal Kanter said the Kanter family does not want Enes to bear the Kanter name. "We had warned him previously about his ties with the FETÖ. We have not been able to reach out to Enes for a long time," he said, adding that the Gülenists controlled Enes for his wealth and reputation.

The 24-year-old Oklahoma City Thunder player has been very active on his official Twitter account, tweeting about political events in Turkey and siding with U.S.-based, fugitive imam Gülen. Kanter has been criticized for his insults and slurs directed at Erdoğan.

Kanter also tweets Gülen's weekly conversations. He recently tweeted that he would sacrifice his mother, father and whole family for Gülen's sake.

On July 15, a group of rogue soldiers linked to the FETÖ attempted to topple the democratically elected government in Turkey and impose martial law.

Does Enes Kanter, who says he'll die for Gülen terror-cult & was disowned by his family for this, harm NBA's image?


Kanter made his debut on the Turkish national basketball team at the 2008 FIBA Europe Under-16 Championship in Italy. He declined to play for the senior national team at the 2010 FIBA World Championship, which was held in Turkey. The team went on to win the silver medal.

He played with the Turkish national team for the first time at the 2011 EuroBasket. He appeared in eight games and averaged 9.6 points and 3.9 rebounds per game. On February 19, Kanter signed with the Oklahoma City Thunder in a three-team deal that also involved the Detroit Pistons.

Military troops loyal to the government, along with police units and millions of Turkish citizens, succeeded in quelling a coup attempt, launched by a small military junta linked to the FETÖ/PDY starting from mid-afternoon on July 15.

Residing in Pennsylvania since 1999, FETÖ's ringleader, Fetullah Gülen, is known as the man who controls about 150 charter schools in the U.S. and he gets $500 million annual income for these from the U.S. government, according to some U.S. media reports.

The schools in the U.S., some of which have changed names over time, were opened in the late 1990's and early 2000's. Around 60,000 students attend the schools annually.

Having huge resources already from the charter schools, FETÖ's economic volume is even bigger when its other functioning structures - such as companies, firms - in the U.S. are considered.

Regarding Gülen's political influence in the U.S., Gülen takes a percentage of the salaries of Turkish teachers at his schools and distributes it to American politicians, systematically buying influence.

Gülen makes political contributions seeking influence and gives awards to influential people – such as Hillary Clinton, the mayor of Toronto, the wife of Jacob Zuma – seeking to co-opt them to play "like a grand master chess player, which makes one wonder how a foreign imam could know the U.S. system so well," Robert Amsterdam, a founding partner of the law firm Amsterdam & Partners LLP, had said early July.