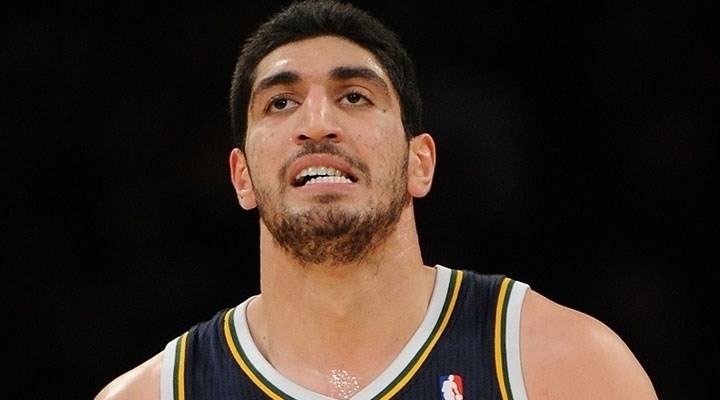 One of the most famous supporters of the Gülenist terror-cult, the members of which embedded in the Turkish army carried out a bloody coup attempt on July 15, released a letter in his Twitter account late Monday.

In the letter, the famous Oklahoma City Thunder player used racist slur against the opponents of the leader of the cult, Fetullah Gülen and showed how devoted he is to the fugitive preacher living in the foothills of the Pocono Mountains in rural Pennsylvania.

"O' universe, hear my voice. I have lost my mother, father, brothers and sisters, my whole family and relatives today, whom I have respected for 24 years. My own father wanted me to change my surname. The mother who gave birth to me disowned me. My brothers whom I grew up with disregard me. My relatives do not want to see me anymore," he said.

Showing his devotion to the terrorist cult, "Not just one, but a thousand Enes' be sacrificed for this Hizmet ('service' in Turkish) which has been brought up with the tears of faithful, self-sacrificing people.

I would sacrifice myself a thousand times for this cause," he added.

"God take every second left of my life and give it to my dear hodja (Fetullah Gülen)."

Does Enes Kanter, who says he'll die for Gülen terror-cult & was disowned by his family for this, harm NBA's image?

In the letter, he called the opponents of the terrorist group "Bagratuni apostates," a reference to the Bagratuni dynasty, a royal family of Armenia that ruled many regional polities of the medieval Kingdom of Armenia. The Bagratuni people were, according to some historians and authors including Armenian writer Levon Panos Dabağyan, a Jewish-origin group who had to hide their real identity to protect themselves from antisemitic oppression.

"I would sacrifice going to heaven for this Hizmet, I would laugh at hellfire.

The love for my dear hodja is greater than every kind of love, be it the love for a mother, father or brother. We did not find this Hizmet so easily to just leave it because of several Bagratuni apostates," he went on, not failing to show his racist side.

"I will sacrifice my father, my mother for the Hizmet, for this cause.

Let no one have any doubts! God will embrace the members serving this cause and let them prevail."

Encouraging Gülenist terror-cult members and symphatizers, he said: "Resist, my brothers, resist, my sisters. Be patient. Let's not fail this test. Let's not be the losers in the journey to win."

In the open letter he also confirmed that he was disowned by his family and was now seeking to serve only the Hizmet, his new family.

"From now on, my father, mother, brothers and sisters are the self-sacrificing members of Hizmet who keep the Turkish flag flying in more than 171 countries in the world. From now on, my whole family is my teary-eyed hodja," he said.

"These oppressors will fail soon, in a short time. Be patient, God is on our side. My God will make everything good. We will not give up this fight. With God there is no grief," he concluded.

He signed the letter as Enes (Kanter) Gülen, changing his surname after his family said that they were disowning him for having ties to the terror organization.

Kanter had recently tweeted that he would sacrifice his mother, father and whole family for Gülen's sake.

The 24-year-old Oklahoma City Thunder player has always been active on his official Twitter account, tweeting about political events in Turkey and siding with U.S.-based, fugitive preacher Gülen.

Kanter was disowned by his family earlier Monday.

His father Mehmet Kanter announced that he had disowned his son for his ties to the Gülen Movement on Monday. Saying that Enes was hypnotized by the Gülenist terror-cult, his father wrote: "I apologize to the Turkish people and the president for having such a son."

Mehmet Kanter, said he was quite disturbed by his son's behavior and insulting tweets directed at President Recep Tayyip Erdoğan.

Stressing that he has been educating students for almost 30 years, Kanter said: "His statements and behavior trouble our family. I told Enes that we would disown him should he not change his course. He did not care."

The elder Kanter said he has not been able to communicate with Enes since 2015. "I would not have taken Enes to the U.S. for the basketball camp where his talent was discovered had I known that it would come to this point," he said.

Mehmet Kanter's cousin Bilal Kanter said the Kanter family does not want Enes to bear the Kanter name, adding that the Gülenists controlled Enes for his wealth and reputation.

Military troops loyal to the government, along with police units and millions of Turkish citizens, succeeded in quelling a coup attempt, launched by a small military junta linked to the Gülenist terror-cult, starting from mid-afternoon on July 15.

Turkey's government has repeatedly said the deadly coup attempt, which killed more than 230 people and injured nearly 2,200 others, was organized by U.S.-based figure Fetullah Gülen's followers and the Gülenist terror-cult.