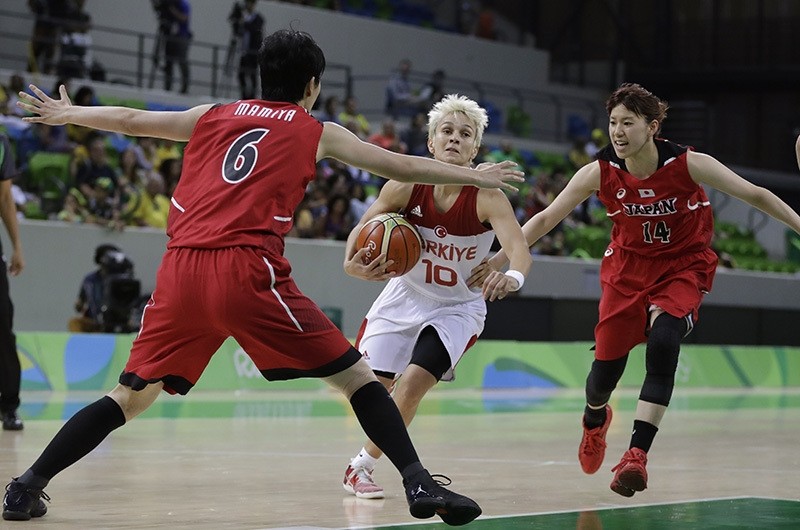 Former North Carolina star Laura Sanders scored 36 points to help Turkey knock off previously undefeated Japan 76-62 in women's basketball Tuesday. Sanders turned in her best scoring performance yet in group play. Japan's loss leaves only Australia undefeated at 3-0 in Group A, while the United States and Canada are 2-0 in Group B. Sanders, known as LaToya Pringle when she played in college, scored 10 of Turkey's first 20 points in taking control. Turkey led 38-13 on a layup by Sanders with 3:04 left in the second quarter before Japan started whittling away and trailed 38-23 at halftime. Japan (2-1) got within eight on a Yuka Mamiya's layup with 4:20 left. Sanders answered with back-to-back jumpers. Nevriye Yılmaz added 15, and Işıl Alben had 14 for Turkey. Ramu Tokashiki, who plays for the WNBA's Seattle Storm, led Japan with 13.

In other good news for Turkey, Daniyar Ismayilov, competing in men's 69kg weightlifting, won Turkey's first medal in Rio after lifting a total of 351kg and bagging the silver. Shi Zhiyong of China took the gold with 352 kg.

Elsewhere, American women's gymnasts won the team's second consecutive gold medal. The score of 184.897 by the gold medal favorites was more than eight points better than the Russian silver medalists.

Top-seeded Serena Williams was beaten by 6-4, 6-3 by Elina Svitolina of Ukraine in the third round of the tennis tournament. Williams committed 37 unforced errors and eight double faults in the loss. The poor performance was not unexpected after she and her sister Venus lost their first doubles match as partners, leaving the tournament prematurely. The duo has won three gold medals as a pair.

In a stunning upset in men's rugby sevens, Japan beat 12-time world series champion New Zealand 14-12. The All Blacks remain a favorite to win gold after recovering from the loss to beat Kenya 28-5, but they have their work cut out for them with star player Sonny Bill Williams out due to a ruptured Achilles tendon.

Gymnast Yuri van Gelder was kicked off the Netherlands team for violating team rules after he admitted to drinking alcohol.

In 2010, he was also removed from the team after he admitted to using cocaine. Celebration turned to tragedy for Sinphet Kruithong who won a medal in the 56-kilogram weight class for Thailand.

His grandmother, Subin Khongthap, 82, who was gathered among family and friends and villagers in Thailand to watch the event, collapsed just as her grandson lifted the weight. She died just moments before he secured the bronze. A mourning ritual was held at his home Tuesday.

In other news, Pele said Tuesday he hopes to be well enough to make it to the closing ceremony.

"I am continuing my physiotherapy and focused on joining you for the closing festivities on August 21. I love you! #olympics," he tweeted. The 75-year-old football legend cited his health in his decision not to light the cauldron last Friday at the opening ceremony.

North Korea's Hong Un-jong and Lee Eun-ju of the South posed for a selfie on Tuesday, reminding fans of the Olympic spirit and eliciting a massive reaction on social media.

A tweet by U.S. political scientist Ian Bremmer, who said "This is why we do the Olympics," was retweeted 22,000 times.

Opposite the Olympics in all its glory, a bus carrying 12 journalists from Deodoro to the Olympic Park was attacked by a rock or gunfire, according to organizing spokesman Mario Andrada. He said three journalist suffered minor injuries.

A lack of food is forcing organizers to allow fans to leave venues to get refreshments. Many have complained about scarce food, water and long lines at counters inside venues. Olympic organizers have blamed suppliers for failing to deliver goods.

Organizers have banned volleyballs being thrown into the stands at the famed Copacabana beach. What has become a ritual at the games, winning teams have signed a ball and kicked or thrown it into the stands where fans scramble for the souvenir.

Following a collision Tuesday, officials banned the practice. Organizers will now select one child from the stands to receive a ball from the winning team.

Meanwhile, a judge in Brazil ruled in favor of protesters who are allowed to demonstrate inside venues.

Some spectators have attended events carrying signs against interim President Michel Temer who took over in May from Dilma Rousseff as she prepares for a trial in the Senate. Many consider Temer's appointment a political coup.

Spectators who demonstrate have been forcibly removed from venues as the International Olympic Committee prohibits political demonstrations at the games. The judge's ruling threatens fines of up to $3,200 for removing peaceful protesters.