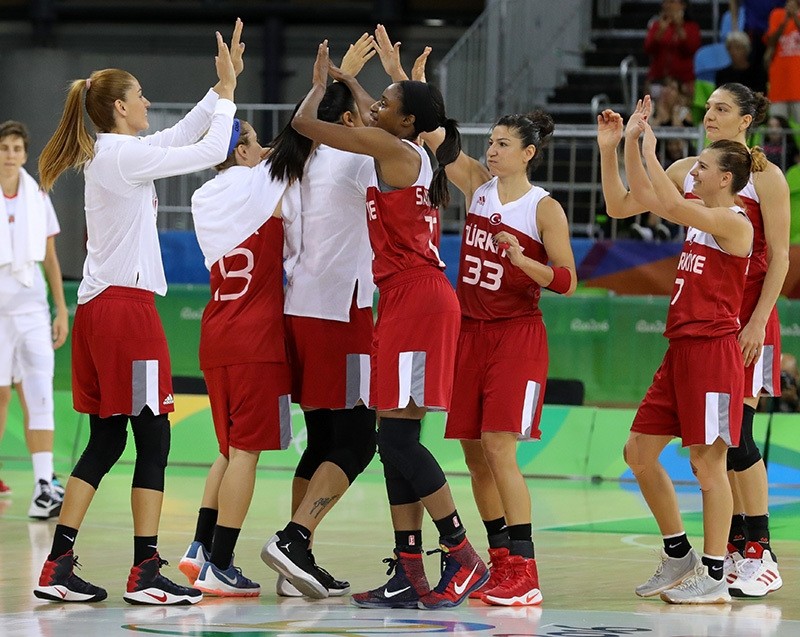 Players of Turkey celebrate their win at the end of the women's preliminary round Group A match between Belarus and Turkey for the Rio 2016 Olympic Games at the Youth Arena in Deodoro, Rio de Janeiro, Brazil, Aug 11, 2016. (EPA Photo)
by Daily Sabah with Wires Aug 12, 2016 12:00 am

After two shocking defeats at the Rio Olympics, Turkey turned the tide in women’s basketball. Captain Nevriye Yılmaz scored 26 points to lead Turkey to a 74-71 win over Belarus

Işıl Alben hit two free throws with 13.1 seconds left as Turkey held off Belarus 74-71 Thursday in group play to take another step closer to advancing in group play. Belarus (1-3) had several chances at the end. Tatyana Troina missed two jumpers before her final driving layup bounced off the glass, leaving her clasping her hands over her face in anguish. Lindsey Harding's final desperation heave from outside the arc was also off the mark. Harding finished with 17 points. Nevriye Yılmaz scored 26 points for Turkey (2-2), now the fourth team in Group A with at least two wins. Lara Sanders added 22 points and 11 rebounds.

Neither team led by more than eight points. Belarus last led at 49-48 off a free throw by Harding. Turkey took the lead for good with a 14-6 run, then held on as fans chanted 'Belarus' while blowing a horn most of the game. Turkish boxer Mehmet Nadir Ünal lost against Cuban rival Julio Cesar La Cruz 3-0.

Here are the other highlights at the Rio Olympics:

*Simone Manuel leaned her head into her hands and cried when she recognized her historic achievement. With her victory in the 100-meter freestyle, she became the first African-American woman to win an Olympic gold medal in swimming. The 20-year-old Manuel upset world-record holder Cate Campbell of Australia and tied with Penny Oleksiak of Canada at the Rio Games on Thursday night. "I hope that I can be an inspiration to others, so this medal is for the people who come behind me and get into the sport and hopefully find love and drive to get to this point," Manuel said.

*Michael Phelps of the United States won the Olympic 200 meter individual medley (IM) to capture the 22nd gold medal of his career and become the first swimmer to win the same event at four consecutive Olympic Games. Japan's 400 IM champion Kosuke Hagino won silver and Wang Shun of China took bronze, both moving dramatically through the field on the final length, after turning in fifth and seventh place. It was yet another extraordinary swim for Phelps, 31, who has now won two individual and two relay golds at his fifth Olympics, two years after coming out of retirement. His medal haul has now risen to 26, including two silvers and two bronzes, with the 100 butterfly final still to come on Friday. Thirteen of his golds came in individual races, the rest in relays.

*Putting the gulf between herself and the rest of the gymnast world on full display, 19-year-old Simeone Biles became the fourth straight American woman to win the Olympic all-around title and fifth overall, while cementing her reputation as the best of her generation and perhaps ever. Biles has spent the last three years dominating her sport, winning 15 world championships.

*Adilson da Silva of Brazil hit the first Olympic golf shot since 1904 with the opening tee shot. Justin Rose made what is believed to be the first hole-in-one.

*The Pacific Island nation of Fiji erupted into celebration after its rugby sevens team defeated Britain 43-7 to capture the country's first Olympic medal.

*Marcus Fraser of Australia had the first that mattered the most on the Olympic Golf Course – the first-round lead. Fraser shot an 8-under 63 that stood for a three-shot advantage over Henrik Stenson of Sweden and Graham DeLaet of Canada.
Last Update: Aug 12, 2016 4:50 pm
RELATED TOPICS