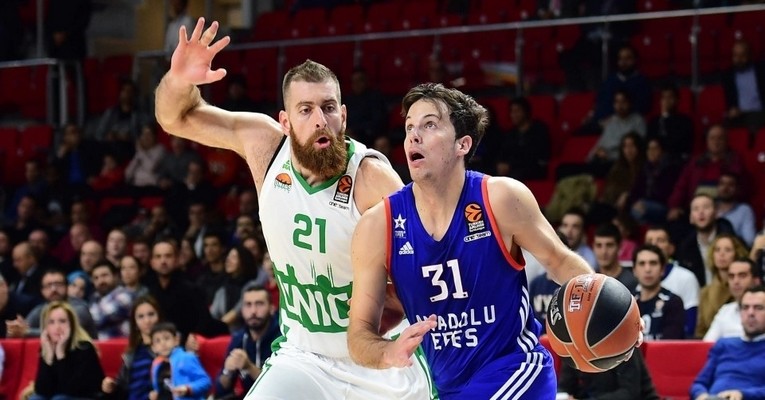 Thomas Heurtel starred with 24 points and 8 assists as Efes smashed its club record for assists with 34, seven more than their previous best and just two short of the EuroLeague mark held by Real Madrid

Anadolu Efes came from behind and then held off a late Unics Kazan charge to register a 104-99 victory in their Turkish Airlines EuroLeauge basketball match at Istanbul's Abdi İpekçi Arena on Tuesday. The win boosted Efes's record to 3-4, while dropping Unics's to 2-5. Thomas Heurtel starred with 24 points and 8 assists as Efes smashed its club record for assists with 34, seven more than their previous best and just two short of the EuroLeague mark held by Real Madrid. Jayson Granger also dished eight assists while Derrick Brown served up another six helping the club surpass its own record.

Efes also scored from 23 of 24 their free throws (95.8 percent), which marked the best free throw shooting night in the club's history, in games where it attempted at least 10 foul shots.

DeShaun Thomas scored 13 of his 20 points in the first half to keep Efes in the game early, as did Cedi Osman, who scored 13 in the first quarter and finished the game with 16 points on 4-of-5 three-point shooting. Bryant Dunston added 13 points and nine rebounds while Tyler Honeycutt contributed 12 points, six rebounds and five assists for the winners.

Elsewhere, like a phoenix rising from its ashes, Maccabi Tel Aviv put behind a series of bad results in both EuroLeague and the Israeli league to beat Fenerbahçe 87-77.The score, however, does not really portray the huge difference in the two team's performances in the fourth quarter.

Sonny Weems and Yogev Ohayon cut the Fenerbahçe defense into small pieces, thanks to their creativity and scoring abilities. The American forward had a super all-around game with 22 points, four assists and five rebounds while the Maccabi veteran guard dropped 16 points and adding four assists, making the serious absence of Andrew Goudelock look almost irrelevant.

It was of little surprise that near the end of the match, Zeljko Obradovic, Fenerbahçe's Serbian coach was sitting at the bench, having accepted the fate of his team.

"I want to congratulate Maccabi Tel Aviv. They played a very good game," said Zeljko Obradovic in the post-game press conference. "They were very aggressive. It's their style. They tried to run and score many points in transition and we weren't able to stop their game. Even if we talked about this before the match. Most of their points came by bad turnovers my players made."

The Final Four goes to Belgrade in 2018

The 2018 Turkish Airlines EuroLeague Final Four will take place at the Kombank Arena in Belgrade, Serbia. The decision marks the first time that Belgrade will host a Final Four to crown Europe's club champion in what will be the 30-year-history of the event. Kombank Arena, which opened in 2004, seats 18,400 fans for basketball, making it one of the largest Final Four venues ever, too. Kombank previously hosted the 2005 EuroBasket championship for men's national teams, among other major basketball events.