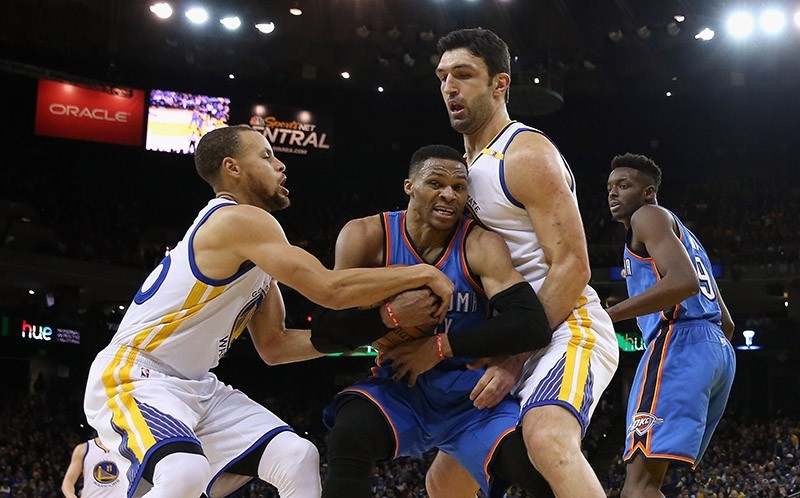 Russell Westbrook #0 of the Oklahoma City Thunder is guarded by Stephen Curry #30 and Zaza Pachulia #27 of the Golden State Warriors at ORACLE Arena on January 18, 2017 in Oakland, California. (AFP Photo)
by Compiled from Wire Services
Jan 20, 2017 12:00 am

The 10 starting players for the 2017 NBA All-Star game were revealed late Thursday by the league and the last two year's All-Star Most Valuable Player (MVP) Russell Westbrook was left out due to a new selection format.

In previous years, only votes from the fans were taken into account. In the new system, fan votes count for 50 percent while votes from players and the media account for 25 percent each.

Westbrook, who boasts an incredible 21 triple-doubles this season so far, fell short to secure a starting guard position among the Western All-Stars. Curry and Houston's James Harden beat out Russell Westbrook for the two Western Conference backcourt spots.

Only two guards are selected to start from each conference -- western and eastern. Golden State Warriors' guard Stephen Curry grabbed the most votes from fans for a guard in the Western conference. The Houston Rockets' James Harden was also selected to start as a guard. They will join frontcourt choices Kevin Durant of Golden State, Anthony Davis of New Orleans and Kawhi Leonard of San Antonio.

Westbrook started the 2015 All-Star game from the bench to score 41 points -- one point shy from an All-Star game record set by Wilt Chamberlain in 1962. His 27 points in 11 minutes constituted an All-Star record for most points in a half.

The following year, he earned his second All-Star MVP award by scoring a team-high 31 points to claim the win.

Defending NBA champions Cleveland Cavaliers' star LeBron James received the most votes from fans, with 1.8 million. He is the leading scorer in All-Star Game history and is set to become just the fifth player to start at least 13 games. He said it meant something extra being the leading vote-getter among fans.

The rest of the East lineup for the Feb. 19 game in New Orleans is Giannis Antetokounmpo of Milwaukee and Jimmy Butler of Chicago in the frontcourt and DeMar DeRozan of Toronto in the backcourt. He beat out Boston's Isaiah Thomas in another tiebreaker.

He and Durant had the highest possible scores across all three voting groups, but the new process eliminated Chicago's Dwyane Wade, Philadelphia's Joel Embiid and Golden State's Zaza Pachulia, who would have been elected by fans under the old format.

But they didn't rank high enough to hold onto spots when player and media votes were counted, though Curry did.

Fan voting served as the tiebreaker, and the two-time MVP's 1.8 million votes trailed only James. So even though he ranked third behind MVP candidates Harden and Westbrook in the other categories and ended up with the same weighted score as them, he got one spot and Harden the other after earning nearly 200,000 more fan votes than his former teammate.

DeRozan edged Thomas by about 41,000 votes among fans, which gave him the tiebreaker to join Irving, the MVP of the 2014 All-Star Game in his other start, which was also in New Orleans.

Perennial East starters such as Wade and Carmelo Anthony missed out, leaving James surrounded by Irving and three players voted as starters for the first time. Antetokounmpo became Milwaukee's first All-Star since Michael Redd in 2003-04.

The NBA's midseason spectacle will be a big night for the little guys, with most of the starters coming from outside the league's biggest markets. More than 38 million votes were cast by fans, a 146 percent increase from last season.

Starting lineups for both conference teams are as follows with the number of career All-Star appearances for each player:

The league's coaches will vote to select the remaining seven bench players. This will be announced on Jan. 26.