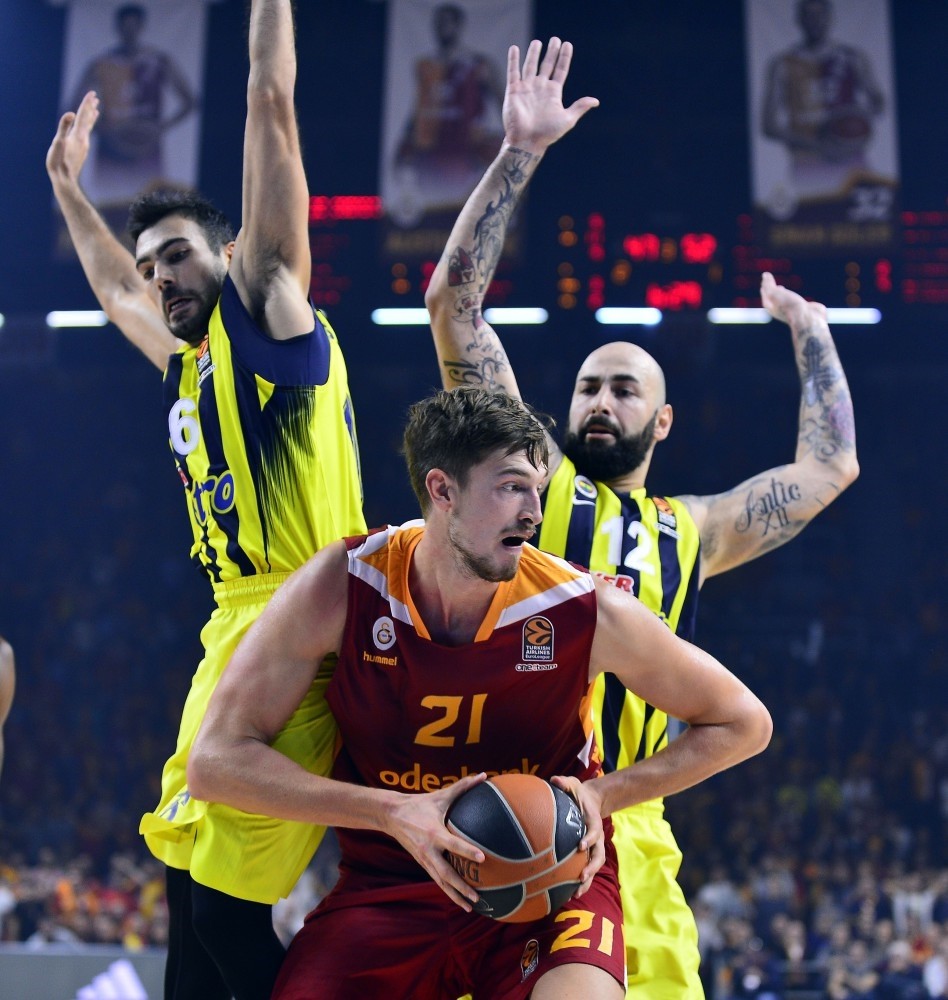 Fenerbahçe and Galatasaray's eternal rivalry will continue in the EuroLeague today. The Yellow Canaries will look to keep their winning ways while the Lions want to bag their first away win

Euroleague basketball prepares to host one of its most fiercely fought derbies, as Turkish powerhouses Fenerbahçe and Galatasaray get ready for a faceoff at the Ülker Sports Arena in the tournament's 20th week fixture at 8:45 p.m. local time. Fenerbahçe have won 12 matches and lost seven in the previous 19 weeks, while Galatasaray have won only six and lost 13.

The match will also be the 11th clash between Fenerbahçe coach Zeljko Obradovic and Galatasaray's coach Ergin Ataman, with Obradovic bagging seven out of the 11 matches against his Turkish colleague. Galatasaray this season have had poor away performances, failing to win a single match out of some eight matches on the road.

Meanwhile, Fenerbahçe have won three of their last four matches and want to continue their winning streak and near perfect home run having lost only two of their nine matches at home this season.

This is the first season where the two greatest Turkish rivals are facing off outside domestic competitions. In their first historic EuroLeague clash in Round 4, Fenerbahçe, on the road, defeated Galatasaray 87-103, before ousting them 92-74 in a Turkish League clash in the same month.

Ever since the arrival of Obradovic in the summer of 2013, Fenerbahçe has ended each of the last three seasons by routing Galatasaray in the Turkish League playoffs.

However, despite their season-ending losses, Galatasaray have also had a good amount of success over the past three seasons, having won eight of their 20 head-to-head games prior to this season. Even though Ataman's men sit at the bottom of the standings with a 5-12 record, we can expect them to put up a great fight against a familiar foe when the two sides square off tonight.

Earlier on Tuesday, Fenerbahçe held off Unics Kazan for an 81-86 win at the Basket Hall. With the win, Fenerbahçe improved their away record to 5-5 and 12-7 overall, while dropping Unics Kazan to 7-12. The Yellow Canaries seemed to have a few cards up their sleeves for its trip to Kazan. On defense, it was obvious, stop Keith Langford and on offense, their primary target was to feed Euroleague big man Jan Vesely. On the other end, Fenerbahçe used the absence of Ekpe Udoh through injury to keep Unics at bay. Bogdan Bogdanovic and Kostas Sloukas played much of the game together before teaming up for some 28 points and 13 assists. The attention the twin playmakers attracted helped Fenerbahçe get good looks for Luigi Datome (18 points with just 1 missed shot) as well as James Nunnally and Pero Antic, who each nailed a pair of threes.

In fact, five different players made multiple threes and that balance often had Unics on their heels. When the game was on the line late, the visitors continued to use all their players on offense, while Unics relied heavily on Langford, who Fenerbahçe prepared for extensively. On the other hand, Galatasaray Odeabank ended its historical five-game losing streak against Maccabi Tel Aviv in emphatic fashion with a 102-63 victory at home at the Abdi İpekçi Arena. Galatasaray posted its highest point total without overtime (102), its highest winning margin (39) and its highest assists total (29) in the Turkish Airlines Euroleague match. For Maccabi, it was the team's worst Euroleague-level defeat since the 1970s.
RELATED TOPICS