NBA breaks record for most triple-doubles in a season, and it's only March 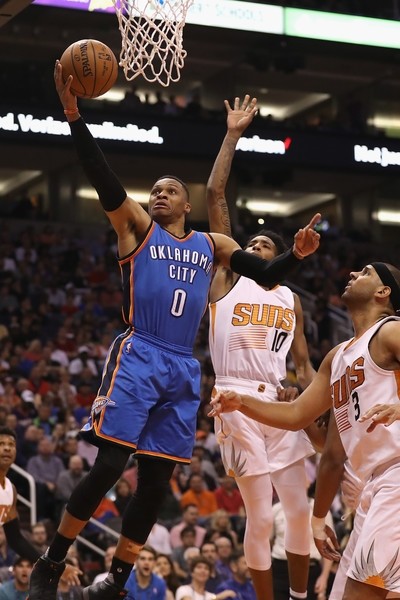 Russell Westbrook of the Oklahoma City Thunder lays up a shot past Derrick Jones Jr. of the Phoenix Suns during the first half of the NBA game at Talking Stick Resort Arena in Phoenix.
by French Press Agency - AFP Mar 06, 2017 12:00 am

The NBA has evolved this season in a way few anticipated, with breakout performances from stars nearly every night. Russell Westbrook is chasing Oscar Robertson in a historic triple-double race, but Westbrook is not the only one racking up triple-doubles this year. From James Harden to LeBron James, they are popping up all over the league more than ever. Thanks to Ricky Rubio on Saturday, the NBA has now set a new record for triple-doubles with 79 this season, breaking the record of 78 that was set in 1988-1989. When you consider it is the beginning of March, the NBA is obviously poised to blow by the old record in the final month and a half of the season. Rubio had a quiet triple-double with 11 points, 13 rebounds and 10 assists, but it still counts. It is his first triple-double of the season. Westbrook has done the heavy lifting this season with 30 triple-doubles. It is not a one-man job, though. Trailing Westbrook in the triple-double column is James Harden, whose 15 stat-stuffs is nothing to laugh at. Next up is LeBron James (7), then Nikola Jokic and Draymond Green, who have each posted four on the season. Fifteen other players have recorded at least one triple-double this season, with DeMarcus Cousins, Julius Randle and Giannis Antetokounmpo each recording two. Westbrook now stands third on the all-time list of players with the most triple-doubles in a single season, one adrift of Wilt Chamberlain who finished with 31 in the 1973-74 season.

The record remains Oscar Robertson's 41 in 1961-62, a benchmark Westbrook could well threaten with the Thunder having 22 games left in the regular season. On Tuesday the dynamic point guard exploded for 43 points, 11 rebounds and 10 assists in a hard-fought win over Utah at the Chesapeake Energy Arena. It was the eighth time Westbrook has scored 40-points while securing a triple double and the second time he has achieved the feat in the last two games. "I try to put myself in a position to where I don't panic, I've been there before," said Westbrook, a pivotal figure in the closing stages for the Thunder. "As a leader, it's my job to make sure my team is calm as well. That's what I tried to do, make sure everybody is level headed as well and concentrate on executing down the stretch.

"For many years, that was our problem, being able to execute and get the shot we wanted to. But I think that's a part of my job to make sure we execute down the stretch." "They are making my job a lot easier," Westbrook said of his teammates. "They put teams in a tough spot because they have to help when we have great shooters around the perimeter. It's tough for teams."

Utah coach Quin Snyder could not disguise his admiration for the Thunder's main man. "He played great," Snyder said of Westbrook. "That's who he is. ... He made some plays down the stretch. He does that." The win helped the Thunder improve to 35-25, putting them within two games of the Jazz in the Northwest Division. Gordon Hayward topped the Jazz scoring with 19 points while Rodney Hood weighed in with 18 points. George Hill added 13 as Utah fell to 37-23.
RELATED TOPICS