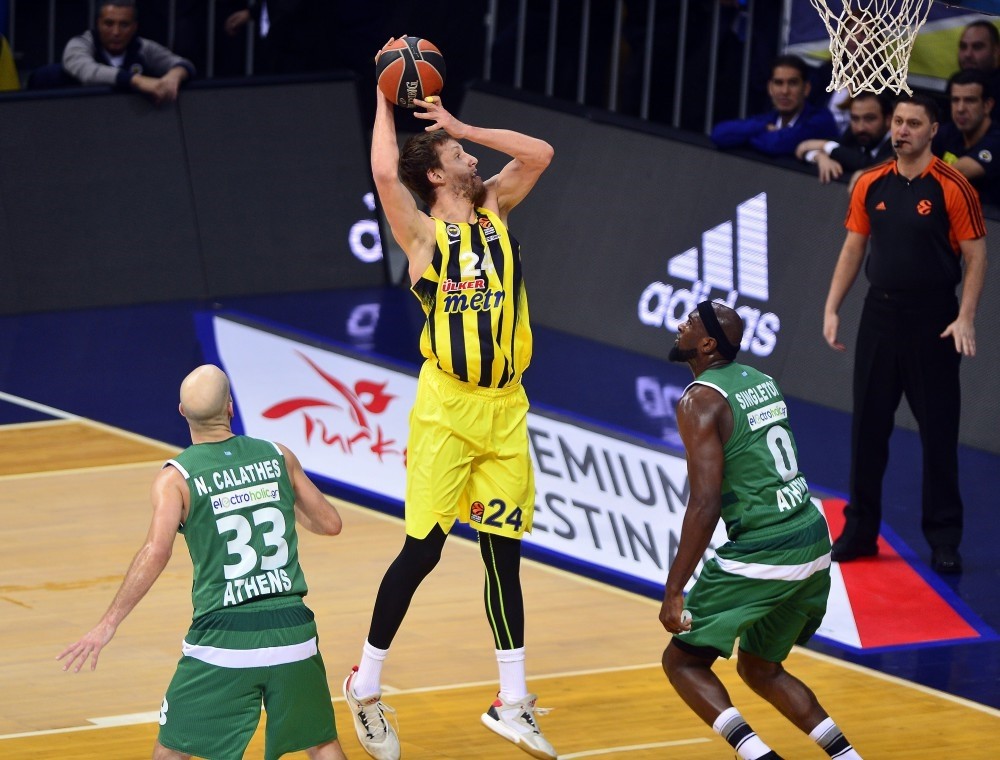 by Daily Sabah Apr 08, 2017 12:00 am
On the next-to-last night of the longest, most intense regular season in the history of European basketball, the first two pairings for the 2016-2017 Turkish Airlines Euroleague playoffs are now clear.

One of those confirmed best-of-five series will be fourth-place Panathinaikos Superfoods (19-11) versus fifth-place Fenerbahçe (18-12).

Of course, that means that Fenerbahçe head coach Zeljko Obradovic will face the club he led to five Euroleague titles, marking his first playoffs matchup ever against Panathinaikos.

Anadolu Efes (17-12) have already secured sixth place and will match up in the playoffs against third-place Olympiacos. Those two clubs have been down the playoff road together before, going to game five back in 2013 before Olympiacos prevailed on the way to its second Euroleague title in a row.

Meanwhile, Euroleague scoring king Juan Carlos Navarro of FC Barcelona Lassa added another feather to his cap when he scored the 4,000th point of his illustrious Euroleague career.

Navarro did so in the third quarter of his team's final game of the Turkish Airlines Euroleague season at the Ülker Sports Arena in Istanbul against Fenerbahçe in Round 30 of the regular season.

The scoring great hit a fade-away jumper with 5:45 remaining in the third quarter to stem a four-minute scoring drought for Barcelona, which eventually lost the game, 68-65, after overtime.

The 36-year-old Navarro long ago cemented his status as a Barcelona legend, the club he has played all 16 seasons of his Euroleague career with.

The 4,000-point milestone is just the latest in a long list of awards and achievements Navarro has captured over his career. Navarro is a two-time Euroleague champion, the 2008-2009 Euroleague MVP and the 2010 Euroleague Final Four MVP.

He has played in seven Euroleague Final Fours and has been named to the All-Euroleague First Team a record five times in addition to a pair of All-Euroleague Second Team nods. He has also helped Barcelona to eight Spanish League crowns, six Spanish Copa del Reys and the 1999 Korac Cup. Navarro was a member of the great Spanish national team that won the 2006 world championship and gold medals at EuroBasket 2009 and 2011. He also has two Olympic silver medals, an Olympic bronze medal, two EuroBasket silvers and one EuroBasket bronze.
RELATED TOPICS