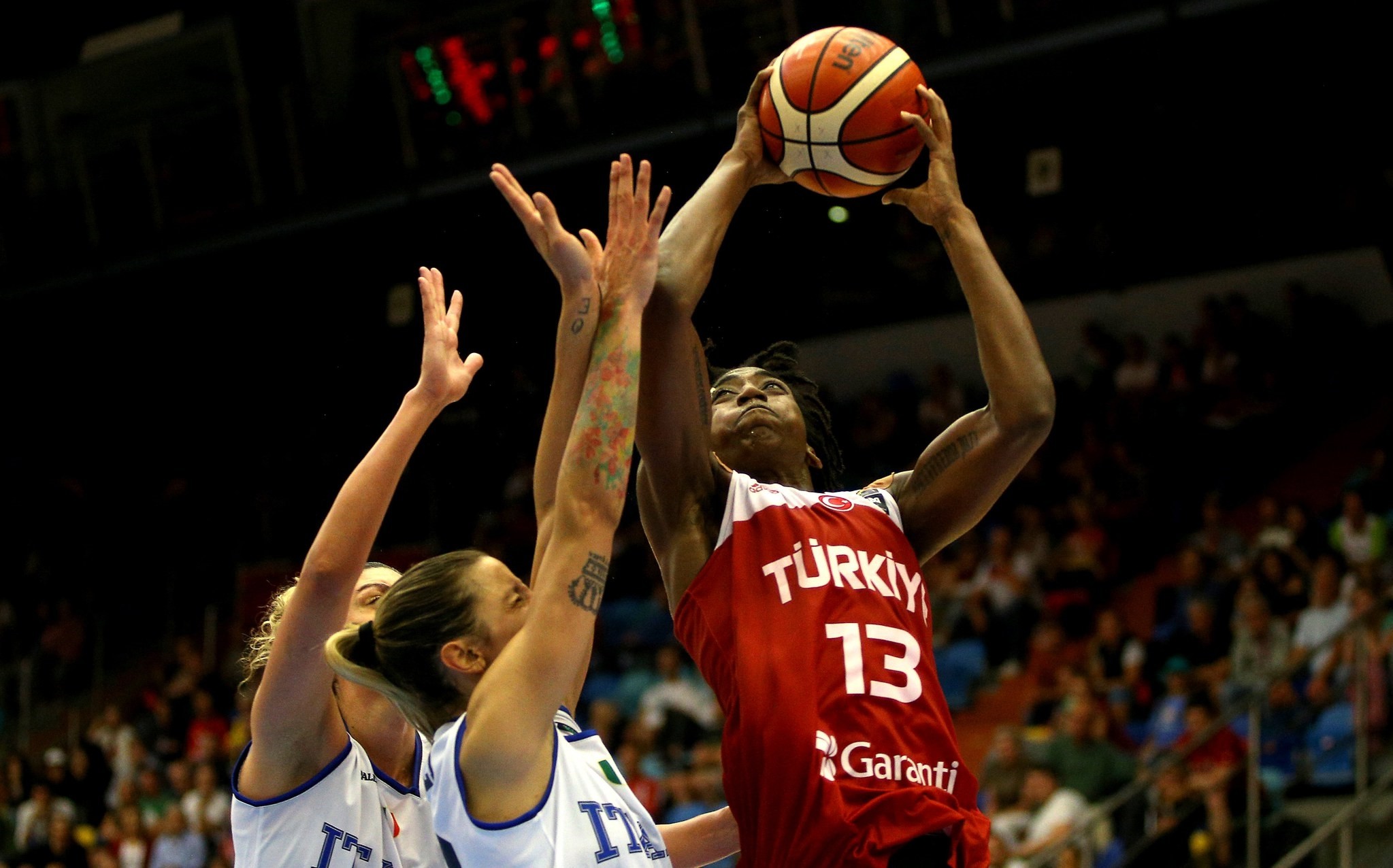 Quanitra Hollingsworth (R) of Turkey in action against Alessandra Formica and Sabrina Cinili of Italy.
by Daily Sabah Jun 19, 2017 12:00 am

The national basketball team who have already secured the quarterfinal, will wrap up their Group B campaign with a match-up against Belarus today in the FIBA EuroBasket Women's tournament being held in the Czech Republic

The group campaign of the FIBA EuroBasket Women's tournament, which is being held in the Czech Republic, will be completed today with the third matches. Turkey, who has secured the quarterfinal before, will wrap up their Group B campaign with a match-up against Belarus today and it will be nothing but a formality because the crescent-moon team beat Slovakia and Italy and now the Turkish team is eyeing the semifinals.A strong double-double performance by Kuanitra Hollingsvorth helped Turkey beat Italy on Saturday and put the team in the quarterfinals of the FIBA EuroBasket Women tournament. The 54-53 win at the Hradec Kralove Arena was Turkey's second win in Group B. Hollingsvorth was the game's top scorer with 29 points and 21 boards.

The Red-Whites beat Slovakia 69-58 Friday in the team's first game of the tournament. The victory over Italy guarantees Turkey finish atop the group. According to status, teams who are ranked in the first two advance directly to the quarterfinals.

"I am proud of our team who advanced to quarterfinals. They secured the quarterfinals stage even before the play the last match. They put a great performance and if things continue to happen like this we will see greater successes," Turkey Basketball Federation CEO Ömer Onan said after the match against Italy.

Meanwhile, veteran player Şaziye İvegün Üner stressed that they gave priority to defense in the first two matches. Quanitra Hollingsworth repaid Turkey coach Ekrem Memnun for his faith in giving her a spot in his final 12, burning Italy with 29 points and 21 rebounds.

Meanwhile, there was a wide spectrum of emotions on the second day of the Final Round as Slovenia bagged a first-ever win and hosts Czech Republic were eliminated. It was the second case of luck for Slovenia as they wrote a historical line by posting a gutsy and compelling 59-56 win against Greece.

In stark contrast, there were tears of sadness rather than elation for hosts Czech Republic as they were eliminated after barely 24 hours. They lost an intense duel 74-70 against Hungary which came after their opening day loss to Ukraine. Even a win against Spain today won't help as their fate is sealed as the fourth-placed team in Group A. It was a brilliant effort by Hungary who had some outstanding contributions and most notably, Zsofia Fegyverneky who had 20 points, 7 rebounds and 6 assists.

The most thrilling game of the day came in the capital as Belgium moved to 2-0 after a gripping and famous 76-75 overtime win against Russia. Ann Wauters did great work in the paint with 20 points and 9 rebounds and weighing in some great defensive plays too. Emma Meesseman offered 23 points and 6 boards as they handed Russia their first loss.

Defending champions Serbia are staring down the barrel of a potential early exit after they went 0-2 with a 73-57 loss to unbeaten France. Spain posted a scintillating second-half as they cruised past Ukraine 76-54 with Sancho Lyttle again playing dominant, adding 16 points and 18 boards. Latvia were floundering against Montenegro in the early stages of their Group D clash but completed a stunning comeback.