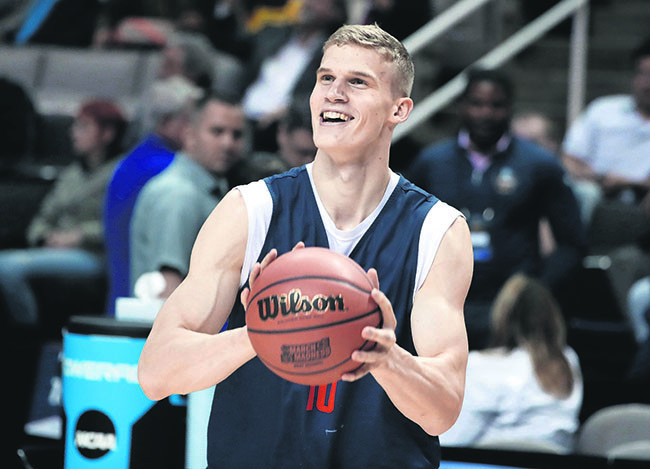 Arizona forward Lauri Markkanen smiles during practice in San Jose, Calif. Markkanen is a lottery pick in NBA draft after one season at Arizona.
by Associated Press Jun 24, 2017 12:00 am

Lauri Markkanen had a special accessory sewn into the lining of his suit jacket at the NBA draft. The Finnish flag. "It's been a little while," Markkanen said. For the sharpshooting Finn, it was worth the wait. Markkanen -officially drafted by Minnesota, but traded to Chicago in the deal that sent Jimmy Butler to the Timberwolves -will become the second Finland-born player in the NBA, after Hanno Mottola. And while international players didn't hear their name called as often in this year's draft as was the case last year, when a record 27 were selected, there was still a distinct foreign flavor. There were a half-dozen players with true international ties taken in the first round. Right after Markkanen went off the board, the New York Knicks took point guard Frank Ntilikina with the No. 8 pick. Still just 18, Ntilikina has been a pro for three years already. UCLA's T.J. Leaf, picked No. 18 by Indiana, was born in Israel. Terrance Ferguson, the No. 21 pick by Oklahoma City, was born in Oklahoma but played this last season in Australia. OG Anunoby, the No. 23 pick by Toronto, was born in London. And Anzejs Pasecniks was taken at No. 25 by Orlando before getting traded to Philadelphia; he's a Latvian who has been playing in Spain. But he's well-versed in the NBA world.

The second round, as usual, featured plenty of players from foreign teams -former UCLA player and Australia-born Jonah Bolden was most recently playing in Serbia; Vlatko Cancar, Ognjen Jaramaz and Alpha Kaba were all teammates in Serbia; Isaiah Hartenstein was born in Oregon, raised in Germany and played in Lithuania; Mathias Lessort has been in France and Aleksandar Vezenkov last played in Spain. They've all been pros already. Now, when or if any actually get to the NBA, their biggest challenge awaits.