Turkey to face Spain in round of 16 in Eurobasket, losing 89-79 to Latvia 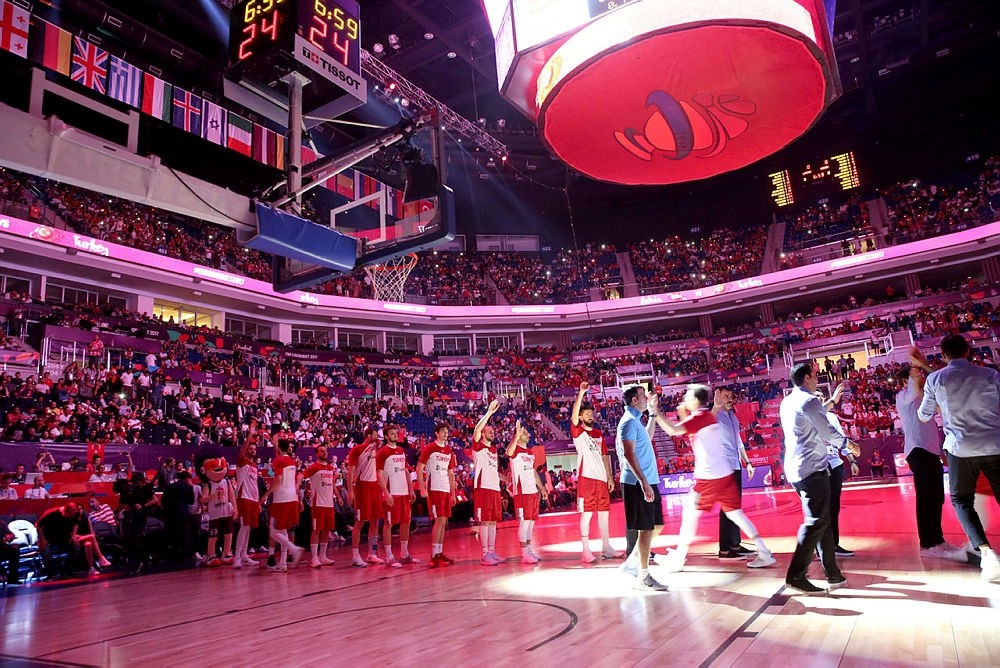 The goal for every team in Group D coming into the event was to avoid powerful Spain in the Round of 16. That unwelcome task ended up going to hosts Turkey, who lost to Latvia 89-79 in the final game of the group to finish fourth

The Turkish national basketball team lost to Latvia 89-79 on Thursday in the EuroBasket 2017 Group D match at the Istanbul Ülker Sports Arena. Having already qualified for the Round of 16, Turkey needed to beat Latvia to finish in third place, to avoid facing undefeated Spain. However, Latvia, under the leadership of the New York Knicks' young star Kristaps Porzingis, who scored 28 points, proved too much for a young Turkish team. Cedi Osman scored 24 points for Turkey, but it wasn't enough to help his team avoid facing Spain in the Round of 16. Turkey will face the Spanish giants on Sunday, 6:45 p.m. at the Sinan Erdem Dome in Istanbul.

After the match Turkey head coach Ufuk Sarıca spoke to the press, saying, "The simple mistakes we made had an impact on the result. We played a game that was similar to two games we lost before in the group. We played well but it was not enough. They were good rivals against us. They are experienced and play basketball fluently. Yet, we could have won. But two turnovers and a foul decision made us lose."

Latvia ended up taking second place in the group and will next play Montenegro. First place in Group D, and a match-up with Hungary, went to Serbia, who steamrolled Belgium 74-54 with Boban Marjanovic scoring 22 points in 22 minutes and Bogdan Bogdanovic collecting 15 points and 9 assists.

"We were really a tough team to beat tonight, really prepared, focused and very organized defensively," Serbia coach Sasha Djordjevic said. "I believe this is our best defensive game in this group."

Meanwhile, Alexey Shved scored 30 points as Russia escaped a fourth quarter scare to beat Britain 82-70. Winless Britain drew within one point, at 68-67, three minutes into the final quarter in Istanbul, but two three-pointers from Shved then helped the Russians hold on. The Russians' Round of 16 showdown will be against Croatia.

Pau Gasol became the all-time leading scorer in FIBA EuroBasket history as he helped Spain remain perfect heading into the knockout stage of the tournament. Gasol made a three-pointer in the second quarter of Spain's 87-64 win over Hungary to overtake France's Tony Parker atop the scoring list in basketball's European championships. Parker managed 1,104 points in his career, while Gasol ended Thursday night's game with 20 points for 1,111 and counting.

"Happy and thankful to be able to do something that is outstanding. Just means that I've been part of great teams and I've had great teammates and great coaches, great coaching staffs," said Gasol, who is a three-time European champion and two-time FIBA EuroBasket Most Valuable Player.

Spain finished Group C with a perfect 5-0 record, ahead of Croatia, Montenegro and Hungary. All four teams qualify for the knockout phase, which starts on Saturday.

The Croatians took second in the group after routing the eliminated Czech Republic 107-69, with their Indiana Pacers shooting guard, Bojan Bogdanovic, leading the way with 25 points.

Group C saw another top individual feat as Romanian Andrei Mandache collected a rare triple-double of 14 points, 11 assists and 10 rebounds in his team's 86-69 loss to Montenegro.