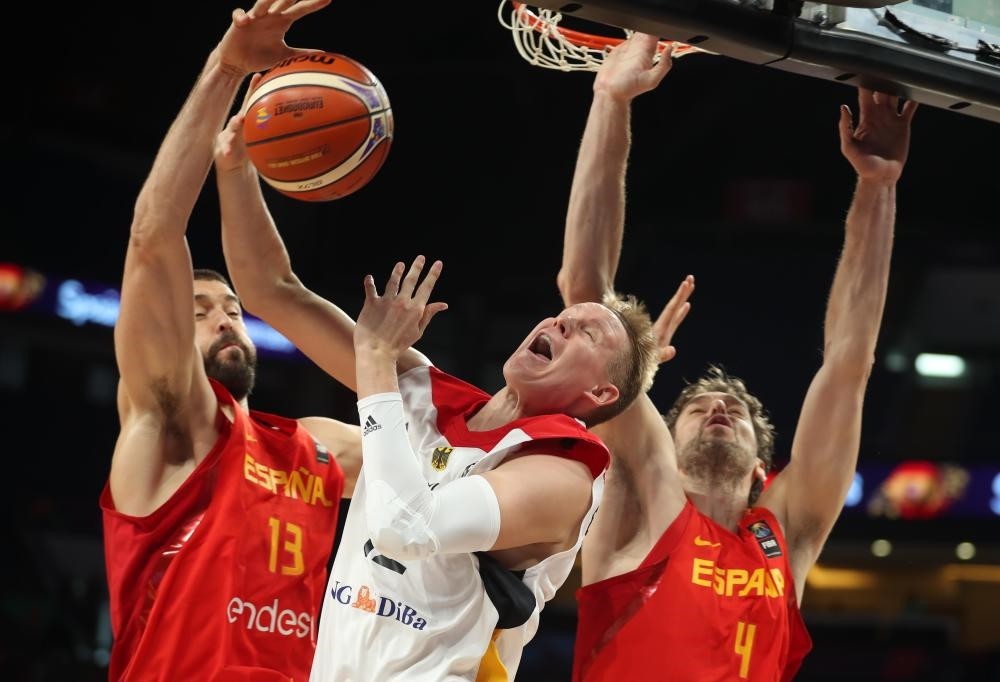 Robin Benzing of Germany and Pau Gasol and Marc Gasol of Spain in action.
by Compiled from Wire Services Sep 14, 2017 12:00 am

Marc and Pau Gasol were too much to handle as Spain's NBA brother duo guided the reigning champions past Germany 84-72 on Tuesday and into the EuroBasket semi-finals.

Marc Gasol nailed a national team career high four three-pointers in scoring 28 points to go with 10 rebounds, while Pau Gasol scored 19 points as Spain reached the European semi-finals for the 10th straight time. Marc Gasol scored 18 of his points in the third quarter, including 12 points in a 15-3 Spanish run to close the period and give them control of the game, which had been tied at 50-50. Sergio Rodriguez chipped in 11 points and seven assists in Spain's 13th consecutive EuroBasket victory.

Dennis Schroeder picked up 27 points and eight assists, but they were not enough for Germany, who were in the top eight for the first time since 2007. Spain are two games from winning their fourth continental title in the last five editions and will next face off against Slovenia who defeated Latvia in a EuroBasket 2017 quarterfinal match Tuesday with a score of 103-97. Fans at Istanbul's Sinan Erdem Dome saw the competition's most scoring teams go head-to-head and weren't disappointed. Slovenia, under NBA-patented point guard Goran Dragic's leadership, led the first quarter 34-23. But fellow NBA star Kristaps Porzingis and his teammates erased the deficit and headed to locker room leading 55-51 after the first half. The third quarter was all about Slovenia as they reopened the margin by starting the quarter with an 11-0 run, eventually leading by 10 after the third quarter at 76-66.

For Latvia, Bertans brothers Davis and Dairis helped Porzingis get back into the game and they managed to narrow the deficit to one point (93-92) with 1:51 to go. But Slovenia never gave up the lead by sinking the clutch free-throws and managed to defeat Latvia to advance to the semifinals. Dragic finished with 26 points and 8 assists and center Anthony Randolph scored 16 points and grabbed 9 rebounds, while Luka Doncic added 27 points and pulled 9 rebounds in the victory. Porzingis' 34 points and the Bertans brothers' combined 35 points were not enough for the losing side.