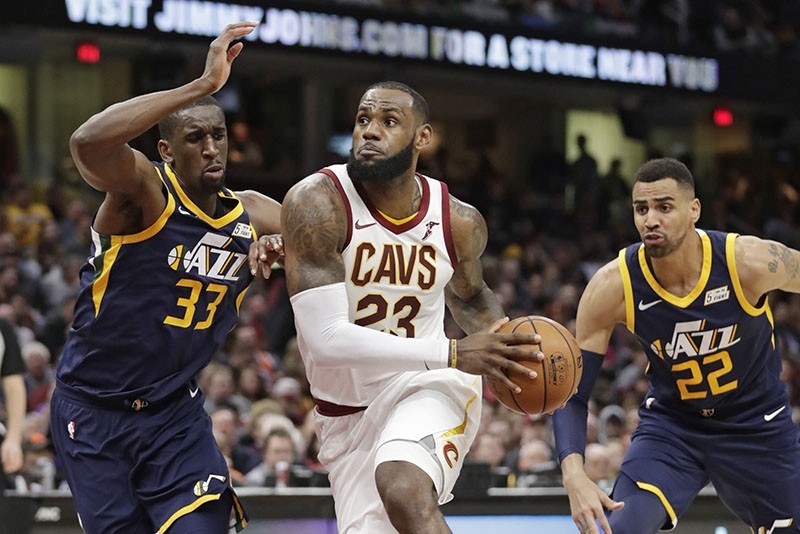 LeBron James' numbers have done more than move the Cavaliers near the top of the Eastern Conference. He also has placed himself squarely in the discussion to win his fifth Most Valuable Player award.

James had 29 points, 11 rebounds and 10 assists for his 60th career triple-double Cleveland beat the short-handed Utah Jazz 109-100 on Saturday night

James had his fifth triple-double of the season and third in his last four games, passing Larry Bird for sixth on the career list. James had 10 points in the fourth quarter, was 9 of 15 from the field and 10 of 10 at the foul line.

James has been playing at an extraordinary level all season, prompting the MVP discussion. With his 33rd birthday approaching, he's showing no signs of age.

"I feel good," James said. "I mean, this is my 15th year, but this is one of the best years I've had as far as how I feel and I want to continue that. I want to kind of try to break the mold just for the next generation, just take the narrative out of, 'You're past your prime when you hit 31,' or 'You're past your prime in your 12th year in the league,' or whatever the case may be."

James was asked if he could envision anyone being as dominant as he's been at his age.

"As dominant as me," he said with a laugh. "We'll see. I know what I'm doing hasn't been done a lot in the history of the game. You look at the minutes I've played, the consecutive Finals I've been a part of, the toll on my body. It hasn't been done."

"The game kind of went like a lot of Cavaliers games; LeBron just making plays at the end of the game," Snyder said.

Cleveland has won 17 of 18 overall and 11 straight at Quicken Loans Arena.

Center Rudy Gobert (sprained ligament and bone bruise in left knee) and forward Derrick Favors (left eye laceration) were out for Utah. Both were injured during Friday night in a win in Boston.

James scored or assisted on each of Cleveland's first 13 points. A left-handed dunk off a lob pass from Jeff Green on a fast break late in the first quarter brought the crowd to its feet.

Rookie Cedi Osman scored a career-high 10 points, including five in the fourth quarter. Both Lue and James praised Osman's improvement in comments after the game.

Gobert had an MRI on Saturday and will be re-evaluated in two weeks. Favors had six stitches after being hit with an elbow against Boston and could return Monday.

Mitchell is Utah's leading scorer and kept his team in the game while playing against his childhood idol.

"I've looked up to him my whole life, so the whole thing is crazy," Mitchell said. "The first time I was matched up with him, I was like, 'Wow.' "

Jazz: Sefolosha was held out Friday against Boston to recover from general soreness, but was forced into action because of the injuries to Gobert and Favors. "Frankly, I was hoping not to play him tonight, but with two guys out, we needed him in there," Snyder said. . G Raul Neto (concussion) and G Dante Exum (left shoulder surgery) also were unavailable.

Cavaliers: Lue recorded his 100th regular-season win and had popcorn dumped on his head in the locker room. .... Cleveland has hit at least 10 3-pointers in 19 straight games. ... F Tristan Thompson returned after sitting out Thursday. He missed 19 games with a strained left calf and played a game last week. Thompson had four points with two rebounds in seven first-half minutes.

Jazz: At Houston on Monday night. The Rockets have already beaten Utah twice this season.

Cavaliers: At Washington on Sunday night. Cleveland has won three straight at the Wizards.