Leaders to clash in EuroLeague Round 17 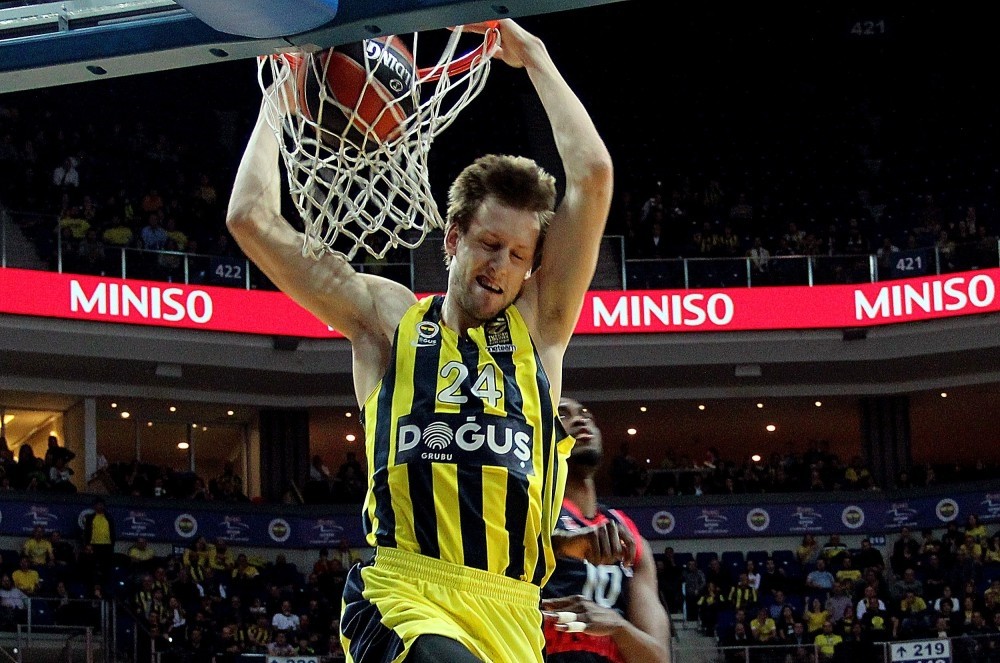 Fenerbahu00e7e's star Jan Vesely was injured last week during the match against Baskonia.
by Daily Sabah Jan 11, 2018 12:00 am

The Turkish Airlines EuroLeague Round 17 will see some of the league leaders in their respective categories clash. In the opener, Panathinaikos Superfoods and the league leader in assists, Nick Calathes, visit FC Barcelona Lassa and the second best assist man, Thomas Heurtel. The top two scorers in the league meet when Khimki Moscow Region and Alexey Shved host Real Madrid and Luka Doncic. In between, Ricky Hickman, who helped Maccabi win the 2014 EuroLeague championship, visits Tel Aviv with Brose Bamberg.

Valencia (5-11) with its newfound confidence, will seek a third straight win with a visit from injury-plagued Fenerbahçe (10-6), which knows every victory is vital in the race to secure home-court advantage. Valencia has shown plenty of character in its last two wins, holding off Panathinaikos before edging out Unicaja by overcoming a 17-point deficit, and will need to be patient against a Fenerbahçe team that has allowed the second-fewest points in the competition (72.1 per game). Valencia has one of the league's best three-point shooting percentages (39.3 percent) but will be tested by a Fenerbahçe defense that has held opponents to just 33.3 percent of long-range conversions.

Rejuvenated Barcelona (6-10) will look to take another step towards the playoffs by making it three straight wins with a tough trip to face third-placed Panathinaikos (11-5) and its former coach Xavi Pascual. The Greens have been boosted by playmaker Nick Calathes' return from injury, and this contest will pit him against Thomas Heurtel in a battle between the league's top two assisters. Panathinaikos has not lost a regular season game at home since November 2016, winning 19 straight since then, and the main task for Barcelona will be overcoming a defense that has allowed the league's third-lowest number of points (75.7 per game).

Two teams needing a reversal in fortunes meet in Tel Aviv, with Maccabi (8-8) in danger of dropping out of the playoff places after a run of four losses in five games, while Brose (6-10) has suffered four straight defeats. Maccabi has developed an unwanted habit of starting games well but finishing badly, squandering sizeable early leads in recent losses to Unicaja and Real Madrid. Brose, on the other hand, desperately needs to spark an offense that has averaged just 69.5 points during its current losing run. Maccabi's Pierre Jackson has averaged 19 points in the last four outings, so stopping him will be another key for Brose.

Co-leader CSKA (12-4) will look to make an immediate return to the winning ways with a trip to face Milan (4-12), which is eager to snap a three-game losing streak and climb away from the foot of the standings. Mindaugas Kuzminskas will make his home debut for a Milan team that needs to find a way of restricting CSKA's offense, which was held to just 72 points, its second-lowest tally of the season, in last week's loss at Barcelona. Milan possesses plenty of firepower of its own, with Andrew Goudelock getting back to full speed following an injury lay-off, scoring at least 15 points in three of his last four games. After a morale-boosting road win last week, Khimki (9-7) will look to solidify its position in the top half of the standings against a Madrid team (10-6) flying high on a five-game winning streak. A home win would also give Khimki a head to head advantage over the Los Blancos after triumphing in Madrid earlier in the season.

Although the matchup between the competition's two leading scorers Alexey Shved (21.8 points per game) and Luka Doncic (18.1 points per game) will attract plenty of attention, the inside battle will also be well worth watching as last week's MVP Malcolm Thomas goes up against Madrid duo Walter Tavares and in-form veteran Felipe Reyes.