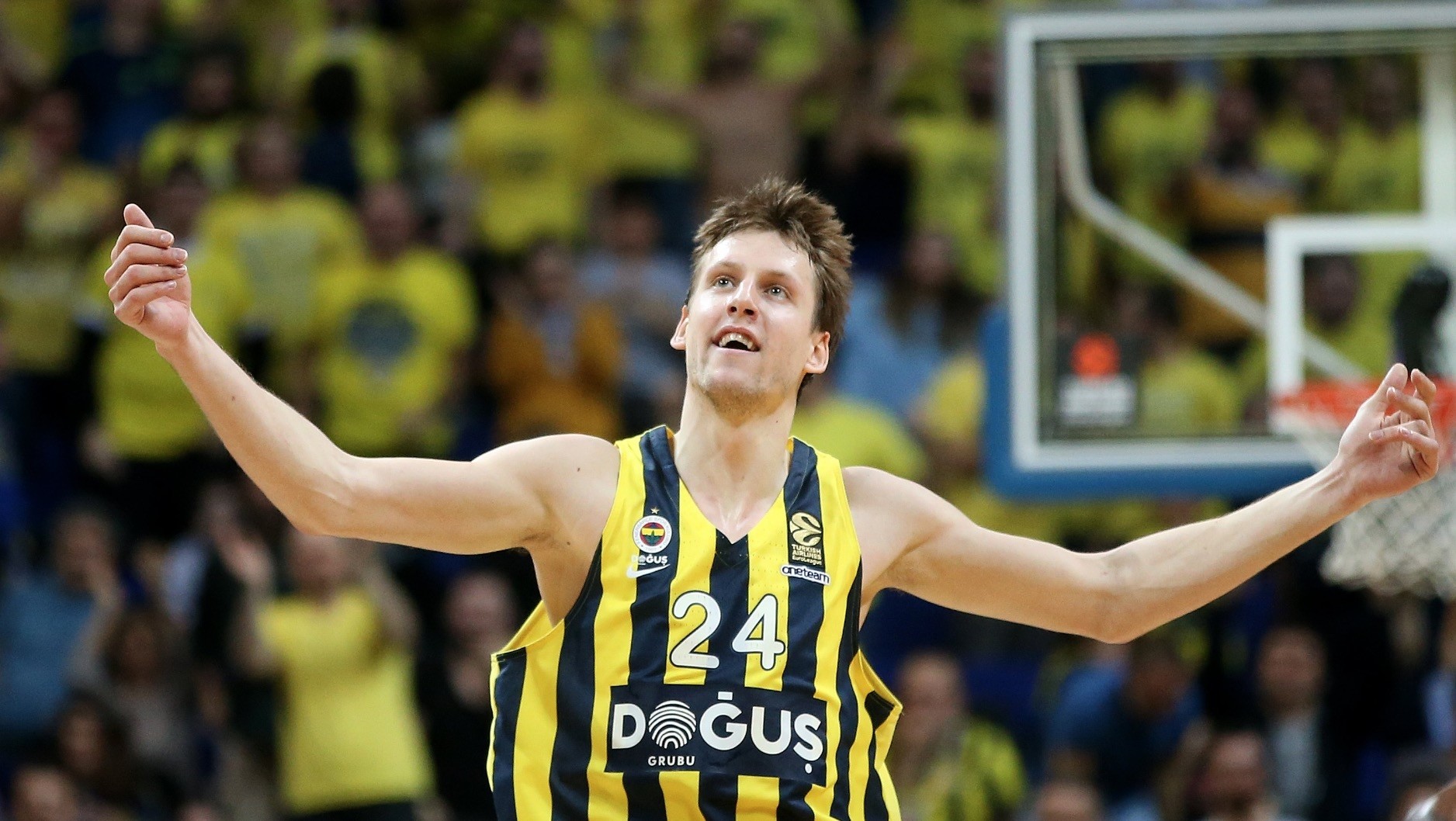 Jan Vesely of Fenerbahu00e7e celebrates after scoring against Brose Bamberg in Istanbul.
by Daily Sabah Feb 12, 2018 12:00 am

Veteran center Jan Vesely had the best performance of his Turkish Airlines EuroLeague career last week to lead reigning champion Fenerbahçe Doğuş to its 15th win and earn himself the MVP honors for Round 22.

The big man posted 26 points, shooting 9-of-12 from 2-point range and making 8-of-10 free throws, as Fenerbahçe beat Brose Bamberg 77-69. He pulled down 11 rebounds and also had 2 steals, 1 assist with 7 fouls drawn, adding up to a career-high performance index rating (PIR) of 36. Vesely's 26 points and 8 offensive boards, which matched the EuroLeague's season high, were his second-best EuroLeague totals ever. Vesely won the third MVP of the Round honor of his seven-season EuroLeague career. Luka Doncic of Real Madrid followed with a PIR of 33, the second highest of this round. Doncic scored 27 points to go with 3 assists, 2 rebounds, 1 steal, 1 block and 13 fouls drawn in a loss against Olympiacos on Friday night. Behind Doncic came CSKA Moscow's Nando De Colo, who had a performance index rating of 31 in a loss against Valencia Basket. De Colo posted 30 points, 3 rebounds, 3 assists, 1 steal with 7 fouls drawn.

Fourth on this list this week is Olympiacos forward Georgios Printezis, who had an index rating of 26, collecting 21 points, 6 rebounds, 1 block and 1 steal in his team's road victory in Madrid. Rounding out the list of this round's top performers are James Augustine of Unicaja Malaga and Will Clyburn of CSKA, each with a PIR of 25. Augustine had 10 points, 12 rebounds, 2 assists and 2 blocks in a home win over Anadolu Efes, while Clyburn had 27 points, 2 rebounds, 2 assists and 8 fouls drawn in CSKA's loss at Valencia. CSKA's De Colo had his personal season-high of 30 points against his former team, Valencia, and led all EuroLeague scorers in Round 22. Alexey Shved of Khimki Moscow Region remains the EuroLeague scoring leader, averaging 22 points. Unicaja's Augustine was this round's top rebounder, pulling down 12 boards against Efes. Efes big man Vladimir Stimac remains overall rebounding leader with 6.7 per game, while Augustine moved up to second place at 6.6. Meanwhile, Nick Calathes of Panathinaikos Superfoods Athens had 11 assists, marking the eighth time this season that he dished 10 or more.