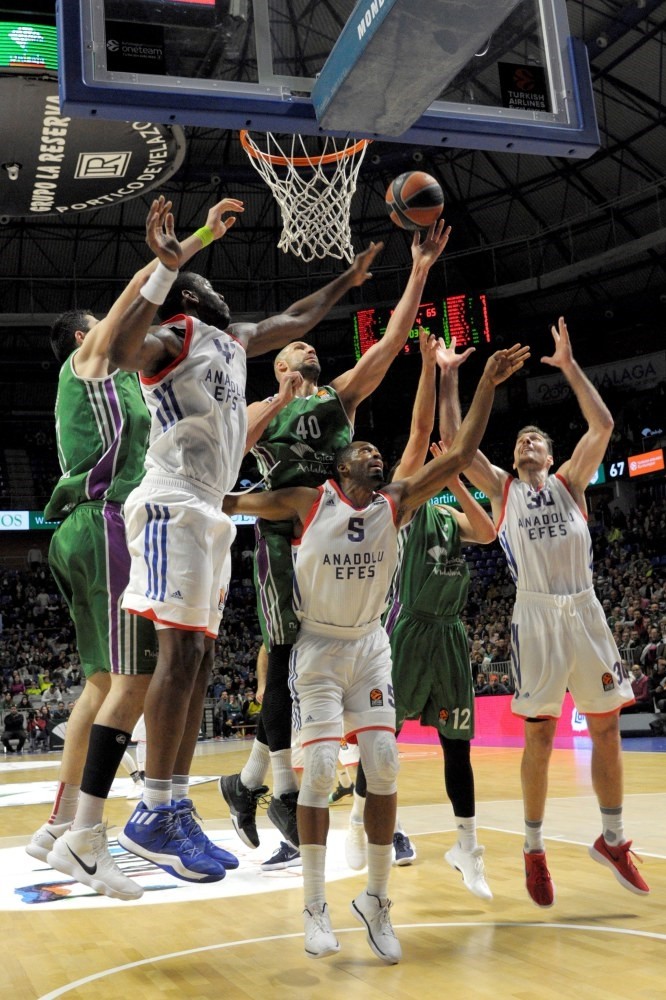 After losing its last three away games, Zalgiris Kaunas (13-9) will look to get back on track against an Anadolu Efes (6-16) team that is placed bottom of the standings but has won three of its last four in Istanbul. Both teams are in good spirits following their domestic cup triumphs last week. Zalgiris has been a far more efficient offensive force, converting 54.8 percent of their 2-point attempts and 41 percent of their 3-pointers compared to the respective totals of 49.4 percent and 34.3 percent for Efes. The home team will have to be particularly wary of the threat posed by visiting guard Kevin Pangos, who ranks third in the league in both 3-pointers made (2.3 per game) and assists (6.2 per game).

Elsewhere there will be a big battle between Khimki Moscow Region and Panathinaikos Superfoods. Both sides have their sights set on securing home-court advantage in the playoffs and the match will feature a fascinating duel between two of this season's outstanding individual performers, Alexey Shved and Nick Calathes. But there's far more to this game than just two players, with Khimki (13-9) claiming four wins in its last five largely thanks to outstanding defense, allowing an average of just 66 points per game in those victories. Panathinaikos (14-8) has stuttered recently, losing three consecutive games on the road, but has welcomed back Mike James to add another spark for the remainder of the campaign.

Meanwhile, Brose Bamberg and Crvena Zvezda could be visiting the last-chance saloon in the race for the playoffs. Brose (8-14) aims to climb a level in the standings with Zvezda (9-13). The German champion has won its last two home games against tough opposition, Panathinaikos and Zalgiris, while Zvezda has suffered three straight road losses. It could well be a shoot-out, with Brose scoring 93 and 95 points in those two wins, while three of Zvezda's last six contests have seen one of the teams reach 100 points. Sharing the ball could be crucial, Zvezda ranks third-last (15.9 per game) while Brose is next-to-last (15.4 per game) in assists.

Finally, Barcelona welcomes Real Madrid under new leadership following the return of coaching veteran Svetislav Pesic to the helm. Madrid (13-9) has enjoyed the better of recent EuroLeague Clasicos, winning three in a row including a crushing 63-102 road victory last season. However, Barca (7-15) edged Madrid in the Spanish Cup final Sunday. Nobody has registered more assists this season than Barcelona (20.6 per game), but Madrid has the second-best team average performance index rating (99.6) on the back of Luka Doncic's 17.9 points, 5.2 rebounds, 4.5 assists and 1.2 steals per game. Barcelona's ability to stop the boy wonder could be decisive to the outcome in this one.