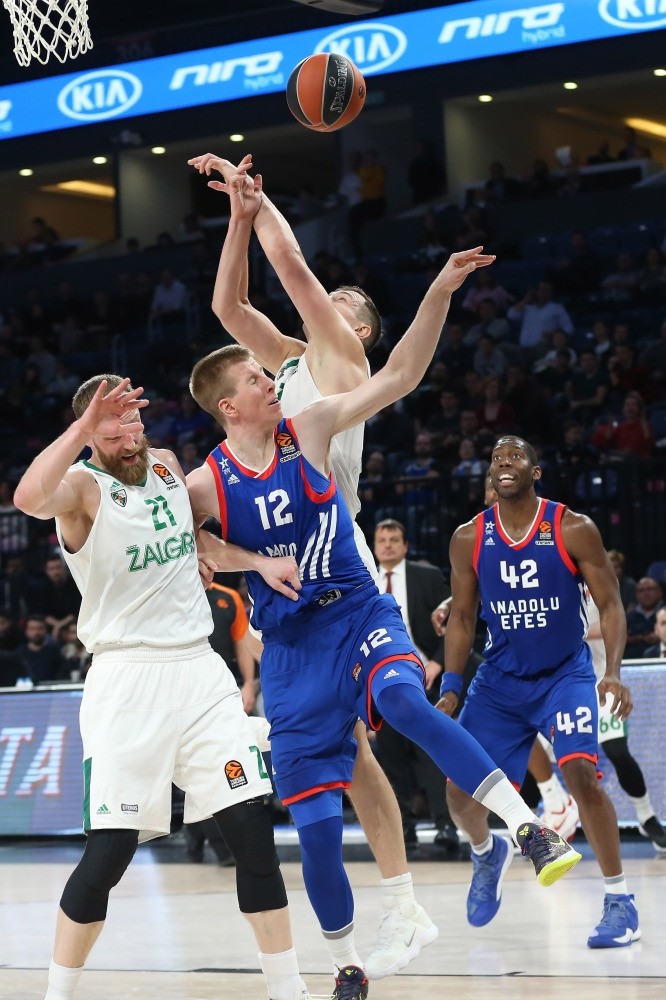 The powerhouses of European basketball will butt heads with a possibility for two more teams snagging playoff tickets in this round. Two of the EuroLeague's winningest sides in the EuroLeague clash today when Maccabi FOX hosts CSKA Moscow. Friday brings with it the always hot derby of Athens between Panathinaikos Superfoods and Olympiacos Piraeus. And in the finale for the round, the owner of the 2016-17 season's best record, Real Madrid, takes on reigning champion Fenerbahçe Doğuş.

Today, Anadolu Efes will seek its most-needed win in an away match against AX Armani Exchange Olimpia Milan. A basement battle for pride gives Milan (7-16) a chance to finish a run of three consecutive away games against last-placed Efes (6-17), which has lost seven in a row on the road.

Milan is the worst rebounding team in the competition with an average of 30.8 boards per game, while Efes ranks third in offensive boards with 12.2 per game.

The Italian team, however, has been far more accurate with its field goal attempts, making 53.1 percent of 2-point attempts and 37.1 percent of 3-pointers, compared with Efes's inferior respective conversion rates of 49.2 percent and 34.8 percent.

Heading into the week as one of four teams currently tied for fourth place, Zalgiris Kaunas, (14-9) will aim to complete the double against FC Barcelona Lassa (7-16), which has lost six of its last seven games and is still bruising from last week's Clasico thrashing.

Zalgiris will lean upon its passionate home crowd and the second-best 3-point shooting record in the Turkish Airlines EuroLeague, having converted 41.5 percent of its long-range strikes.

Expect to see plenty of ball-sharing between the teams who rank first and second in the league in assists: Barcelona with 20.3 assists per game and Zalgiris with 19.6.

Elsewhere, Maccabi Fox Tel Aviv (12-11) will attempt to protect its position in the top half of the standings by gaining its first home win in nearly a decade against CSKA Moscow (18-5), which also needs the victory to maintain a safe distance in first place.

Maccabi has won six of its last seven home games, scoring at least 81 points in each of those victories, and will need to maintain that kind of offensive production against an explosive CSKA offense which has scored 93, 99 and 93 points in its last three outings.

As one of the best offensive rebounding teams in the competition (11.9 offensive boards per game), Maccabi will look to gain an advantage through its physicality.

As for Valencia Basket and Brose Bamberg, two teams with fading ambitions go head to head knowing that victory is essential to maintain post-season ambitions. Valencia (8-15) has been a tough nut to crack at home recently, where it has won four of its last five, including victories over playoff hopefuls Panathinaikos and Khimki as well as first-placed CSKA.

On the other hand, Brose (9-14) is winless on the road since Round 5, having losing eight in a row, but will hope for a change in fortunes under newly appointed Coach Ilias Kantzouris, who seems to have placed a greater emphasis on rebounding with his team gaining 41 boards in last week's win over Zvezda – far above its season average of 32.2.

And finally, Baskonia Vitoria will host Khimki Moscow. A clash in the quest for postseason action sees Baskonia (10-13) continue its push for a place in the top half against red-hot Khimki (14-9), which is in the thick of the race for home-court advantage in the playoffs after winning three in a row and five of its last six.

Although scoring star Alexey Shved gets the headlines, the key behind Khimki's recent success has been defense, with just 66, 74 and 61 points allowed in its last three games. That will be seriously tested by a Baskonia team that regularly produces fireworks at home, scoring at least 81 points in each of its last six games at Fernando Buesa Arena.