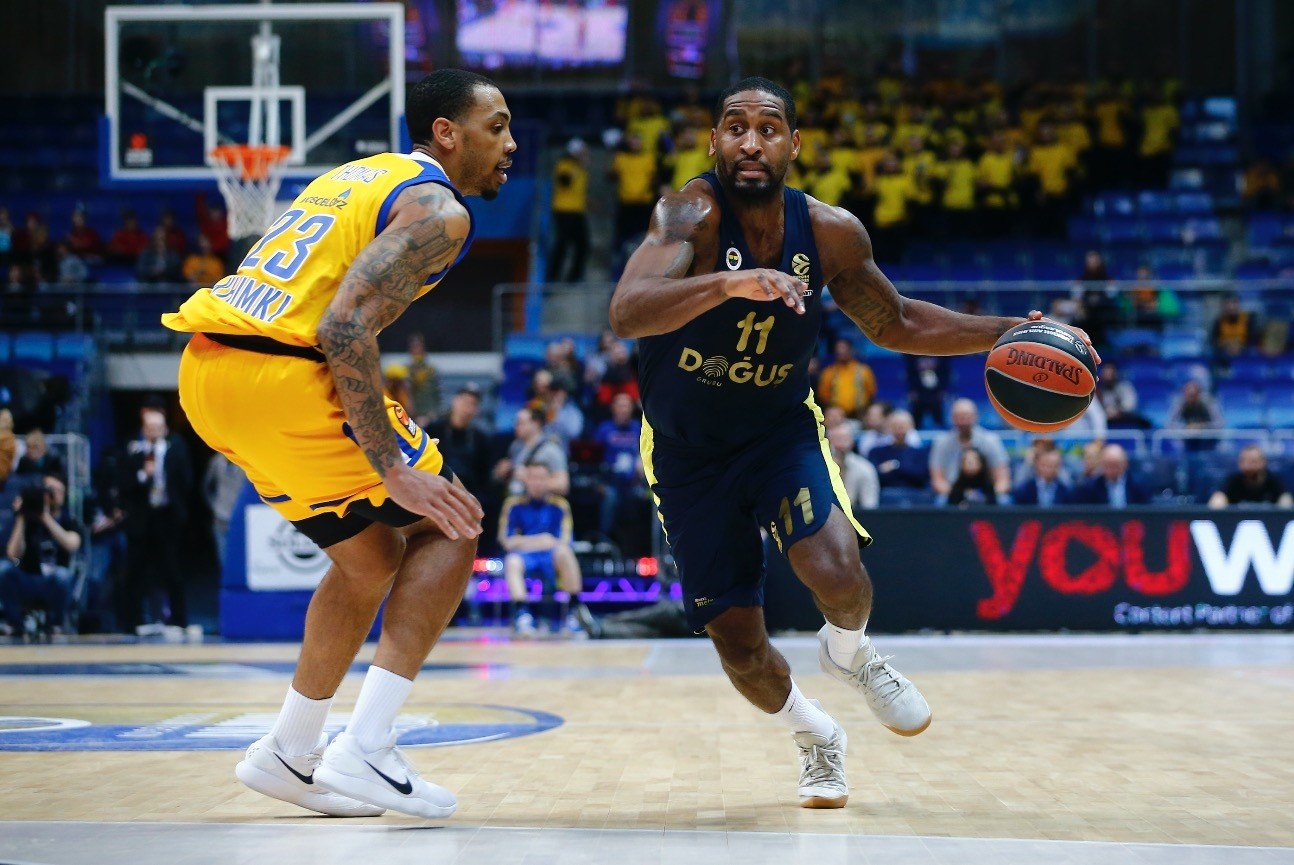 Brad Wanamaker led the Fenerbahu00e7e attack with 14 points in the match against Khimki Moscow last week.
by Daily Sabah Apr 05, 2018 12:00 am

With eight playoff teams confirmed, the Round 30 games starting today will determine the four playoff matchups with Fenerbahçe Doğuş, which has already secured the second spot, taking on Unicaja Malaga

The Turkish Airlines EuroLeague regular basketball season comes to an end this week with teams still jockeying for position and players racking up records in Round 30.

Except for CSKA Moscow and Fenerbahçe Doğuş, who have already confirmed playoff spots as the top two seeds, the rest of the names remain yet to be decided.

Remarkably, after 232 games and more than five months of competition, the third to eighth places are still undecided. While Panathinaikos Superfoods Athens can finish anywhere from third to sixth, Zalgiris can go anywhere from fifth to eighth, and the other four teams are also uncertain of securing a final spot.

In fact, according to some rough calculations, at least 20 different playoff scenarios are still possible. A local derby between CSKA and Khimki, CSKA facing Baskonia in a repeat of last season's playoffs or CSKA against Zalgiris in a repeat of last week's thriller are all possible and that is only for the first- and the eighth-place matchup.

Only one game will pit two playoff sides against one another, Olympiacos against Zalgiris Kaunas. Meanwhile, Panathinaikos Superfoods' visit to Milan and Real Madrid's home game against Brose Bamberg will decide which team finishes in the top four and gains a home-court advantage in the playoffs.

As for today's matches, CSKA Moscow will host Crvena Zvezda. After suffering a rare defeat last week, league-leading CSKA (23-6) will look to end its regular season campaign by getting back to the winning ways against Crvena Zvezda (11-18), which has never won in Moscow.

Reigning champion Fenerbahçe Doğus will take on Unicaja Malaga in Istanbul. Fenerbahçe (21-8) has already locked up a second place finish and will attempt to head into the playoffs on the back of four straight wins.

Unicaja (12-17) has won two of its last three games but has not won on the road since Round 15. A key to the game could be the inside battle, where league-leading rebounder James Augustine (6.9 per game) will give plenty of presence to the visitors.

Fenerbahçe, however, boasts the best defense in the competition and will again attempt to make itself hard to beat after restricting opponents to an average of just 66.7 points in the last three games.

In another match, AX Armani Exchange Olimpia Milan will face Panathinaikos Superfoods. Panathinaikos (18-11) needs a road victory to retain any hope of a top-four finish as it travels to face a Milan team hoping to break a two-game losing streak at home.

In Spain, FC Barcelona Lassa will host Khimki Moscow (16-13), another road team in need of a victory. It could finish the regular season anywhere between eighth and sixth, but would definitely be in the lowest of those positions with a loss. It won't be easy for the Russian team to overcome a Barcelona (10-19) team that must wish the regular season was only just starting rather than ending; the Spanish side has won three of its last five games, averaging 89.8 points per game in the process.

And finally, Baskonia Vitoria will host Anadolu Efes. Red-hot Baskonia (16-13) will look to add further momentum to an already outstanding conclusion to the regular season by recording a seventh-straight victory with a visit from rock-bottom Efes (6-23).