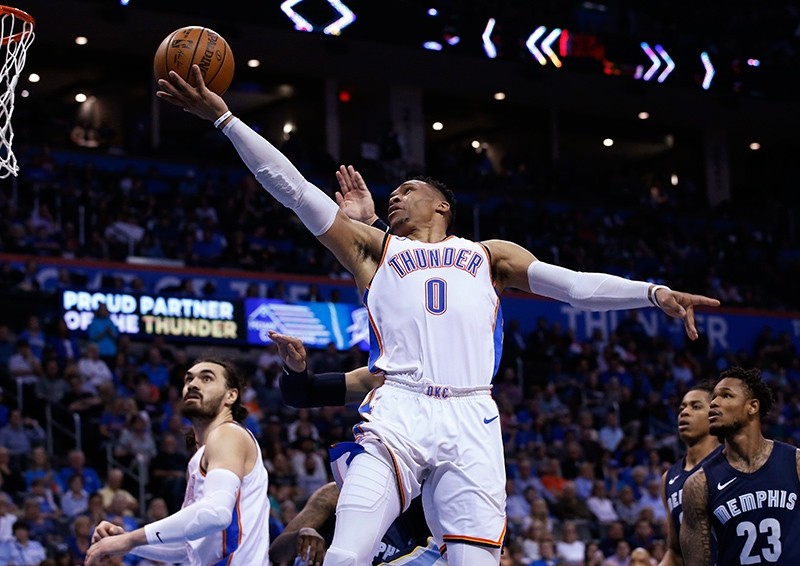 Oklahoma City Thunder guard Russell Westbrook (0) goes to the basket during the second half of an NBA basketball game in Oklahoma City, Wednesday, April 11, 2018. (AP Photo)
by Associated Press
Apr 12, 2018 12:00 am

For most point guards, grabbing 16 rebounds to achieve a milestone would seem a daunting task.

For Russell Westbrook, it seemed a foregone conclusion.

The Thunder star entered Wednesday's regular-season finale against the Memphis Grizzlies needing 16 rebounds to become the first player to average a triple-double in multiple seasons. He had four rebounds at the end of the first quarter, then snagged seven in the second in just under nine minutes. He had five rebounds in the first 2:42 of the third quarter to reach his goal, and the crowd gave him a standing ovation.

"I'm very, very thankful and blessed, man, to go out and compete," Westbrook said. "Like I've said many, many times, I don't take this game for granted. I don't take going out on the floor and competing for granted. When God has got something planned, ain't nobody who can stop it."

After averaging a triple-double and setting a single-season NBA record with 42 triple-doubles last season, he added 25 more this season, and the Thunder won 20 of those games. He ranks fourth in NBA history with 104 career triple-doubles, three behind Jason Kidd.

"His numbers help them win," Grizzlies coach J.B. Bickerstaff said. "They're not meaningless numbers. You get numbers on a bad team or in a blowout game or whatever it is, but he shows the consistency every single night, going out and performing at a high level. There's very few guys, maybe a handful of guys that play with that level of intensity, with a burning fire, to be the best player on the floor every single night. He's one of those guys."

Westbrook had season lows of two field goals made and nine shot attempts against the Grizzlies as he focused on other aspects of the game.

"Russ is going to play the game," said Paul George, who scored 40 points Wednesday night. "He's one of the best to do it at that position. He was looking to get guys going early and saw how the game was unfolding. He stayed with it."

"I've seen him lock in, and I want to really appreciate how good of a player he is and the production he's had these last two years," Collison said. "It's not just that. I'm not too much into the statistics. They're amazing, but seeing him put the organization on his back and lead the organization through a tough time and the way that he's able to show up every night and produce and compete and lead the team has been really fun to watch."