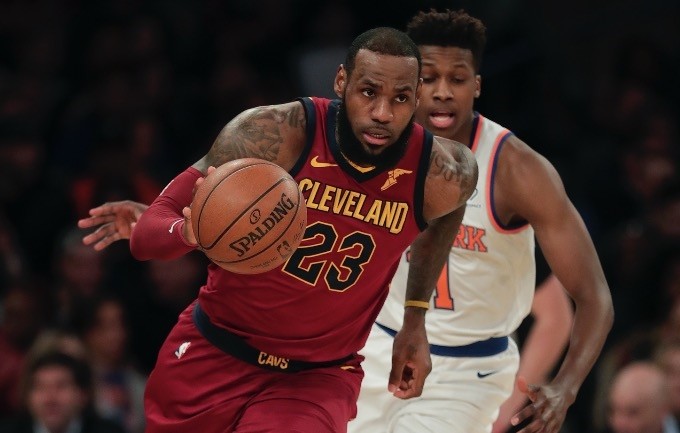 LeBron James played in his 82nd game, scored 10 points and then got some rest for the playoffs as the Cavaliers concluded their regular season with a 110-98 loss on Wednesday night to New York.
by Associated Press Apr 13, 2018 12:00 am

The NBA playoffs that start this weekend already have an extremely tough act to follow. The regular season ended with a flourish. Wednesday's final night of the regular season was well beyond dramatic - an overtime game between Minnesota and Denver to decide the last berth, another overtime game between Miami and Toronto to determine some East fates, a 46-point first quarter by Philadelphia , an absurd 20-rebound, 19-assist night from Russell Westbrook. And now, the best time of the NBA year is finally here. The playoffs are back, with Golden State and Cleveland - who've met in the last three NBA Finals not exactly looking like the overwhelming favorites the league has come to expect. A fourth straight Warriors-Cavs matchup is no guarantee. A fourth straight trip by either of those teams alone is far from certain, either. It all starts Saturday, the 16-team tournament that will be a two-month grind following the six-month grind of the regular season.

Start with the East pairings: Lowry and the top-seeded Raptors play No. 8 Washington, No. 2 Boston faces No. 7 Milwaukee, No. 3 Philadelphia gets No. 6 Miami and No. 4 Cleveland - with LeBron James bidding for an eighth consecutive appearance in The Finals - opening against No. 5 Indiana, a surprise team at the start of the season and one that isn't a surprise anymore.

"We're one of 16 teams that have a chance to win a championship," James said. "That's all you can ask for."

Philadelphia, after years of the rebuilding saga known as "The Process," has a chance as well. The 76ers are going into the playoffs on a 16-game winning streak. Out West, it's No. 1 Houston meeting No. 8 Minnesota - which earned its berth by topping Denver in the NBA's first win-and-get-in, lose-and-go-home regular-season finale in 21 years. No. 2 Golden State opens its quest for a third championship in four seasons against No. 7 San Antonio, No. 3 Portland drew No. 6 New Orleans and No. 4 Oklahoma City opens against No. 5 Utah.

For the Timberwolves, Wednesday was a moment in itself. They needed overtime to beat the Nuggets and get into the postseason. It's Minnesota's first berth since 2004, and ended what was the NBA's longest playoff drought (which now is bequeathed to the Sacramento Kings, who last played a playoff game in 2006). There are some rematches from the 2017 playoffs already waiting. Cleveland swept Indiana in the first round last year, and Boston needed seven games to oust Washington in a thrilling East semifinal series. But the most intriguing should be the Golden State-San Antonio matchup - because once again, just like a year ago, the Spurs will almost certainly be without Leonard. The Warriors are trying for a third title in four seasons, and will play this first round more than likely without Curry while he continues recovering from a knee injury. Golden State went 7-10 in its final 17 games, and clearly sputtered across the finish line.